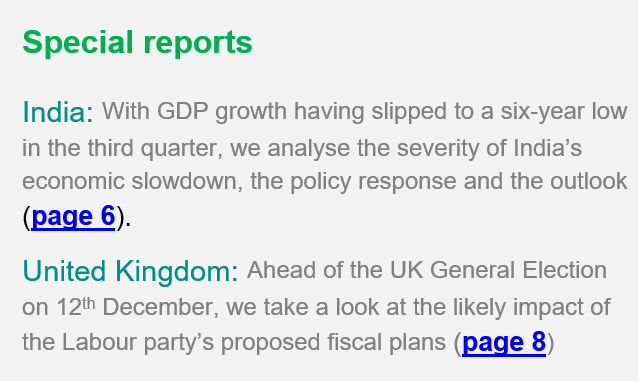 After a week in which the business surveys provided key updates on the health of the global economy mid-way through the fourth quarter, the economic data take a back seat to policy and politics.

With the pace of global growth picking up to a four-month high in November according to PMI survey data, there are signs that the recent easing of monetary policy from many of the world's central banks has helped stem the slowdown, though the overall rate of expansion remains among the lowest since 2016. The coming week sees policy decisions from the FOMC and ECB, both of which have loosened policy this year to safeguard against the recent global headwinds and boost growth. Although both are expected to keep rates on hold, the economic projections and rhetoric will be scrutinised for clues as to future policy direction.

We see further stimulus from the ECB on the cards for early 2020, with Christine Lagarde having now taken over the helm, but the FOMC looks set to continue to sit on its hands for an extended period barring any material changes to the outlook.

Trade wars remain a key concern for the global outlook, and escalating tensions could set back the nascent improvement in the global growth trend. Developments in US trade with China, with new tariffs on Chinese goods set to kick-in on 15th December, will therefore be closely watched.

Brexit is also high on the list of global worries, and the upcoming UK general election on 12th December will be a key development in determining the outlook for the UK's departure from the EU. Polls are hinting at a Conservative party majority, which would lead to Brexit stepping up a gear. The EU Leaders' Summit will also be monitored for Brexit-related developments in particular.

In Asia Pacific, a raft of data for China, Japan and Taiwan will be eyed for signs of economic trends. Policy action will come from the Philippines, while a speech from RBA governor Philip Lowe will be parsed for clues about future policy direction.