The US private sector exhibited the strongest expansion on record in April, supported by faster growth in both manufacturing and service sectors. Relaxation of lockdown measures had a visibly positive effect on consumer services activity, propelling the 're-opening' sectors ahead in April while supply constraints persisted.

The IHS Markit US Composite PMI Output Index posted 63.5 in April, up from 59.7 in March. The reading marks a fresh survey high since data collection for the series began in October 2009.

With the PMI data serving as a leading indicator of business conditions, the April figure suggests that the economic expansion in the US continued into the start of the second quarter. Momentum had yet to fade as the US economy continues to close in on pre-pandemic GDP levels. Demand remained strong even as Covid-19 cases stayed elevated globally. This is supportive of risk appetite, particularly during a period where monetary policy is expected to remain accommodative, as reassured by the US Federal Reserve in their latest April FOMC meeting. 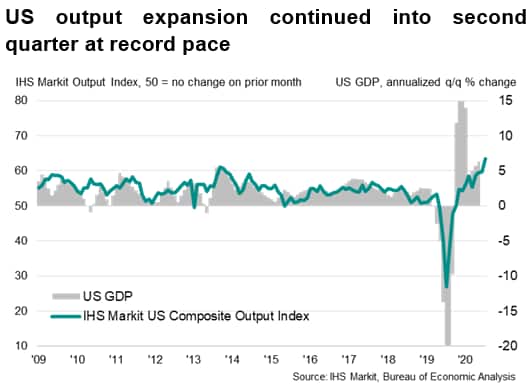 Drilling into the sector data, US manufacturers notably saw the biggest boom in 14 years though this had been accompanied by higher prices. The surge in demand arrived hand-in-hand with supply delays, constraining production, though the level of production remains well above the global average. 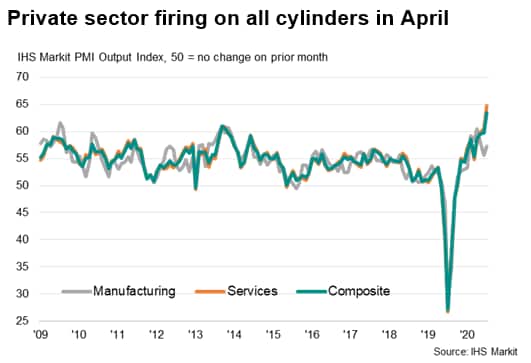 Concurrently, US service providers saw the fastest pace of business activity expansion on record, supporting employment growth in the sector. Strong client demand and an influx of orders prompted the surge in the IHS Markit US Services PMI.

Driving this upturn in service sector performance were the relaxation of lockdown measures and reopening of businesses, as reflected in our IHS Markit COVID-19 Containment Index. Effects of further fiscal stimulus injection, following US President Joe Biden's signing of the $1.9 trillion America Rescue Plan in March, had likely played a part in boosting the demand for goods and services as well. 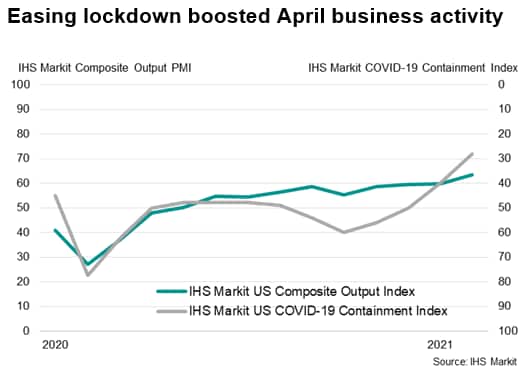 Amid the lifting of the lockdown and distribution of the third round of pandemic relief checks, both consumer good and service sectors saw faster rates of expansion. However, it had been comforting to also note that consumer services saw a relatively sharper improvement in growth momentum. Our US Sector PMI data indicated that activity across the consumer service sector rose sharply in April, with the respective index rising from 51.5 in March to 65.3; the highest reading since July 2013. 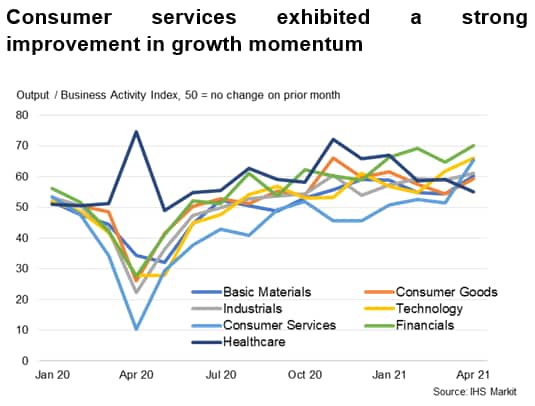 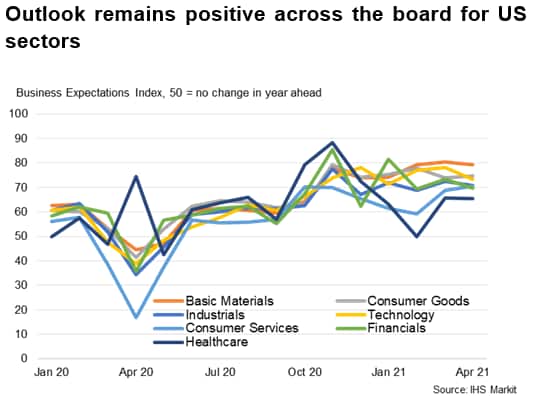 Although some concerns with regards to the sustainability of new order inflows were noted more broadly for the US service sector, consumer service providers held an even more upbeat view of the future in April compared to March, which was a positive sign. Across all sectors surveyed, future business expectations were also strongly positive by historical standards. 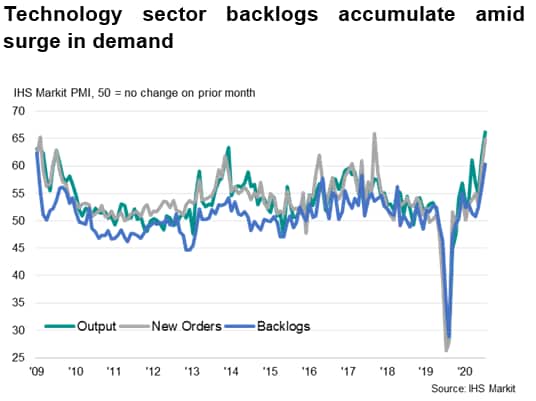 Focusing on the technology sector which had been in the spotlight recently with renewed concerns around the global chip shortage and accelerating inflation, observation of the sub-indices does validate some of these concerns.

Strong demand had been accompanied by a surge in new orders, although the accumulation of backlogged work and supply delays also alluded to the bottlenecks building for tech companies. As it is, automakers around the globe had come under pressure with the shortage of key components, as did the likes of Apple following their latest earnings update. It will be important to monitor any widening of the growth differentials between output and new orders should the supply constraints worsen. This will impact the future earnings potential for firms. 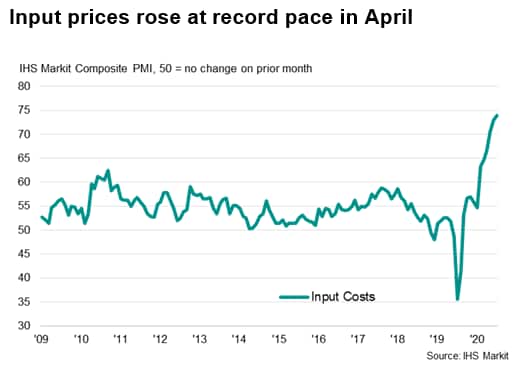 Separately, input costs also suggest that prices continued to climb at the start of the second quarter. Private sector firms in the US recorded unprecedented increases in input costs and output charges in April. We continue to expect the Federal Reserve to stay on hold, at least through to end-2022. That said, a further accumulation of inflationary pressures may invite greater scrutiny and carry potential market and business sentiment implications.