US manufacturers reported the biggest boom in at least 14 years during April, but supply constraints at a time of surging demand are causing prices to also rise at the steepest rate for over a decade, notably for consumer goods.

The IHS Markit US Manufacturing Purchasing Managers' Index™ (PMI™) posted 60.5 in April, up from 59.1 in March. The reading was the highest since data collection for the series began in May 2007 and indicating booming business conditions.

Demand surged according to the latest national survey of purchasing managers, pushing new orders higher at a pace not seen for 11 years amid growing recovery hopes and fresh stimulus measures.

Production also grew strongly, but the rate of output growth remained well below that recorded for new orders. In recent months, the extent to which new orders growth has exceeded that of output has been the greatest on record, indicating that production is being constrained. 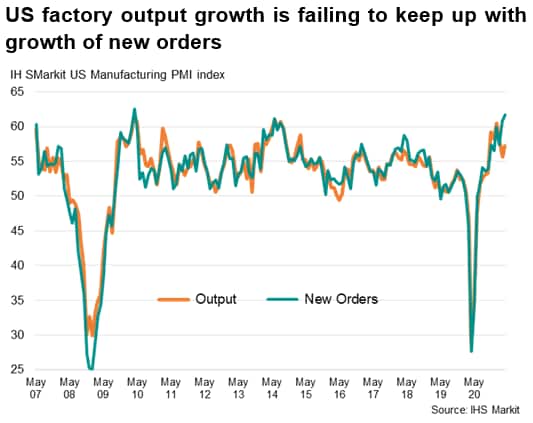 At the moment, sales are being met only by producers eating into their warehouse stocks of finished goods, which fell sharply again in April. The survey's elevated order-to-inventory ratio highlights how producers will need to ramp up output to meet demand. 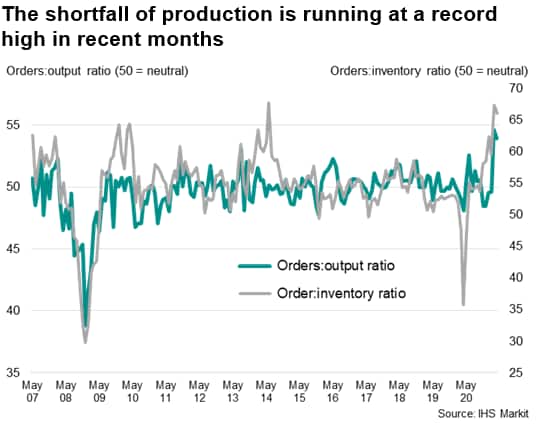 Over the past two months, demand has grown most strongly for consumer goods, coinciding with the injection of fresh stimulus from the government, notably in the form of cash payments to households, which appears to have boosted spending. 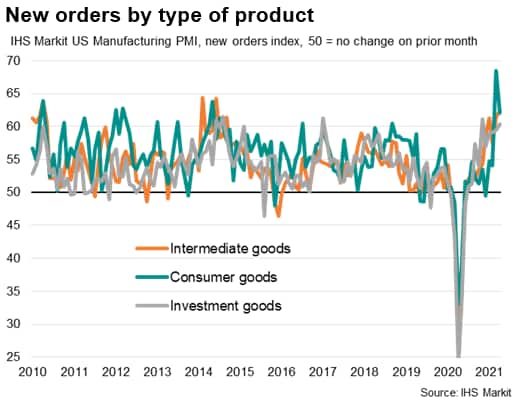 Two other survey subindices provide a valuable insight into how a lack of capacity is inhibiting production growth to an unprecedented extent.

First, suppliers' delivery times are lengthening to a degree not previously recorded by the survey. Manufacturers blame container shortages, port congestion, and a simple imbalance of supply and demand as having caused unprecedented supply delays.

Second, manufacturers' own backlogs of work rose at a record rate in March, with a similar accumulation of these uncompleted orders recorded in April.

With demand running ahead of supply, it's no surprise to see prices increase. The April survey found producers' input costs rising at the sharpest pace since July 2008. The rate of output price inflation meanwhile hit the second-highest on record as firms passed higher costs on to customers. 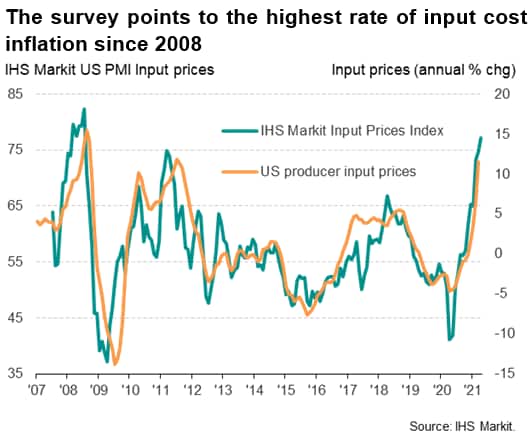 Worst affected have been consumer-facing firms, where a lack of inputs has caused production to fall below order book growth to a record extent over the past two months as household spending leapt higher. It is also the consumer-goods producing sector which has recorded by far the greatest shortfall of output relative to new orders growth in recent months. 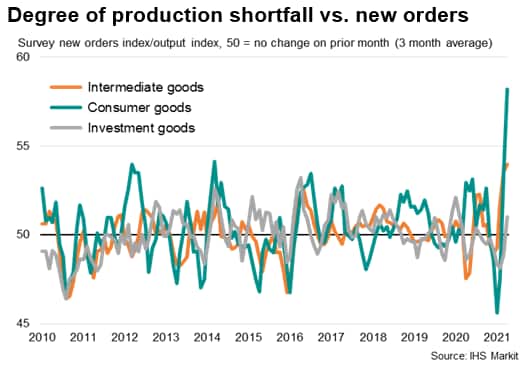 It is also consequently consumer goods producers that have reported the steepest price rises over the past two months on average, albeit with the rate of inflation easing in April from March's record high. Encouragingly, attempts to expand capacity via hiring extra staff gained further momentum in April, though in some cases staff shortages were an additional constraint on production. 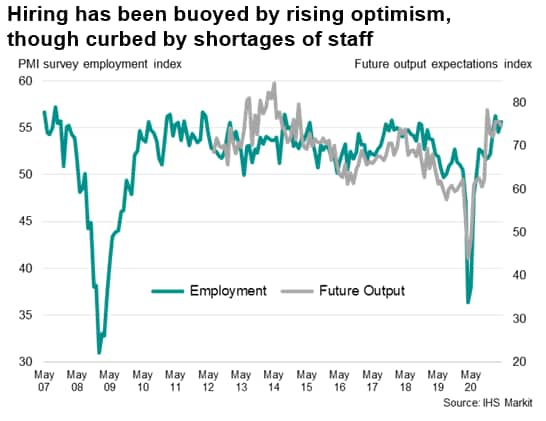 However, with confidence in the outlook continuing to run at one of the highest levels seen over the past seven years, buoyed by vaccine rollouts and stimulus, further investment in production capacity should be seen in coming months, helping alleviate some of the price pressures.