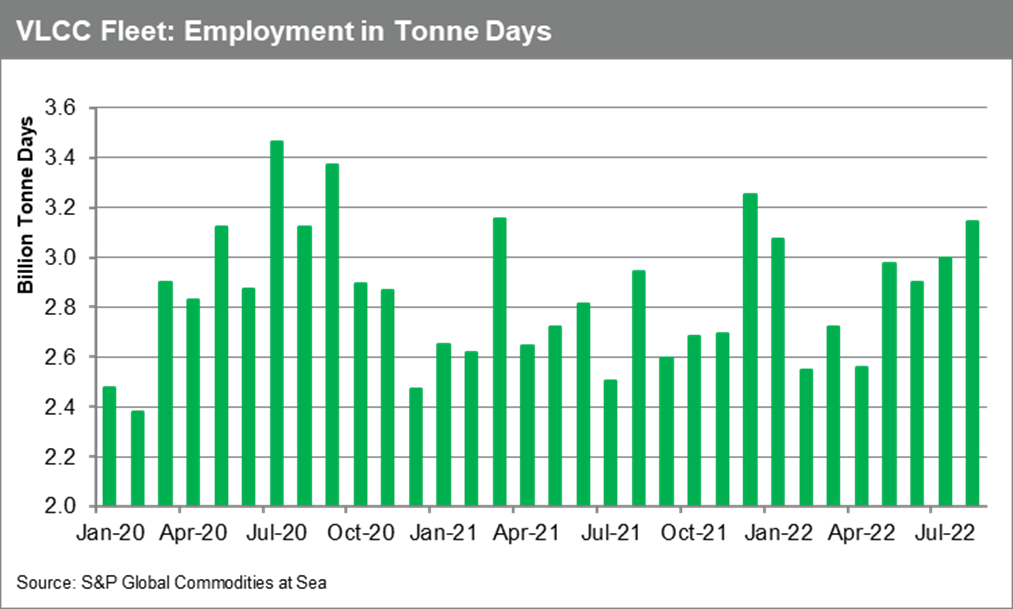 Data by S&P Global Commodities at Sea show VLCC tonne-miles increased by 4.8% on month and 6.8% on year. This has been the highest employment achieved so far this year.

The increase in demand has been reflected both in terms of rising number of fixtures in the spot market and tighter availability of open ships.

The availability of open vessels was also reduced in the Middle East Gulf and other major exporting regions.

European importers have been switching away from Russian shipments, which have been sustained, but have moved more toward India and China, adding to the tanker shipping demand. Suezmaxes and Aframaxes have been employed in these flows, but there has been a spillover effect for VLCCs, since the competition elsewhere coming from smaller tanker segments to chase the same crude cargo has declined sharply.

To understand the actual spot availability, it is worth mentioning that a significant portion of the older fleet of VLCCs believed to be involved in illicit trades and undertaking dark activity has recently seen changes in ownership.

Prices for ageing tankers - approaching 15 years old - have increased, as several investors show increased interest in amassing fleets to carry Russian crude oil to Asia. The price of 10-year-old VLCCs is understood to have increased by more than 20% in recent months.

However, one potential outcome of sanctions on Iran being eased, would be that the global fleet of older tankers increases as the vessels that used to transport sanctioned crude now return to the market, pushing more tonnage to demolition.

With more VLCCs staying employed and for longer, the number of ballast ships has quickly declined. 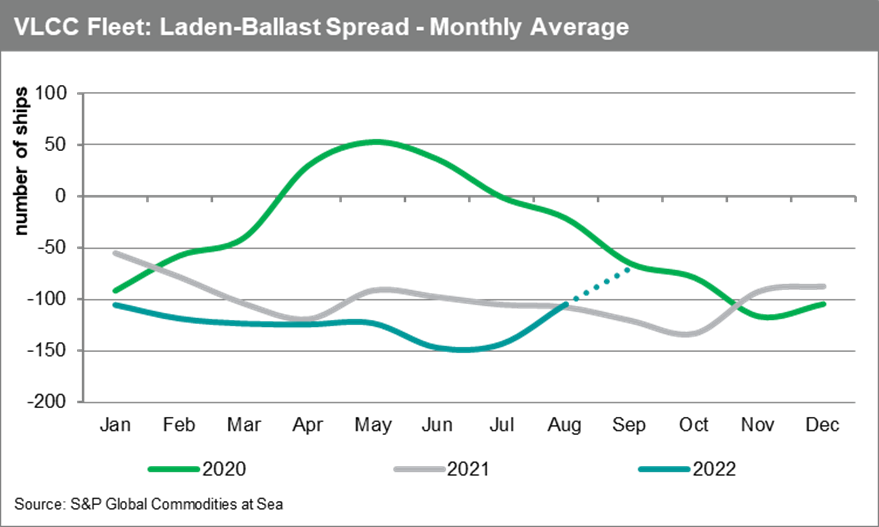 Last year's levels suggest a much healthier market, with an average spread of -100 ships in 2021.

The market last experienced positive figures between April 2020 and June 2020, with the average of Q2 2020 at 40 units. This was driven by the immediate shock following the spread of Covid-19, which led to huge demand for floating storage. The market then slowly returned back to normal levels.

Laden VLCCs now represent more than 45% of the total fleet globally, an unprecedented level since since early H2 2020. 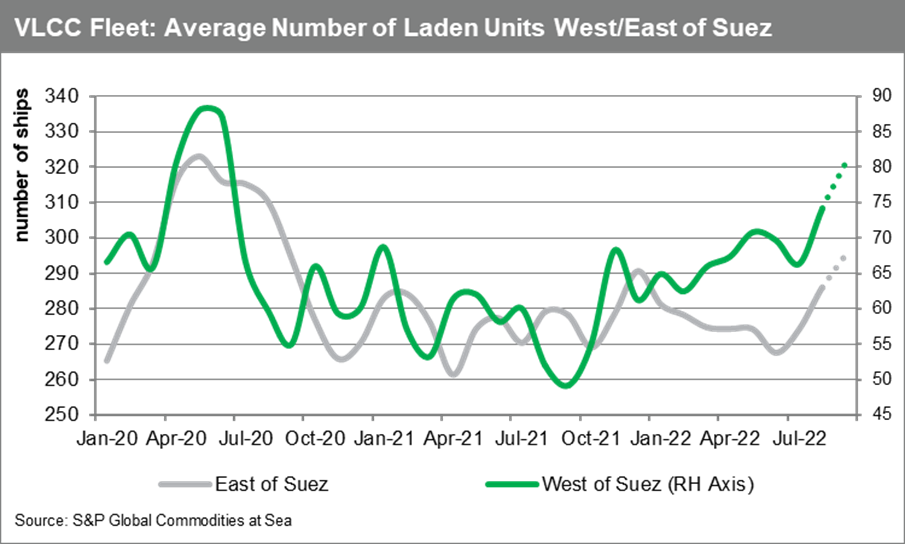 Laden VLCCs west of Suez surpassed 80 units in late August, with an average of 74 for the month. This is the highest achieved since July 2020.

Crude exports on VLCCs from the USGC stood near 2.1 million b/d in August, versus less than 1.5 million b/d in H1 2022. Demand for U.S. barrels has been improving since Q2 2022, with West Texas Intermediate's discount to international benchmarks making U.S. exports much more popular, both in Asia and Europe.

Monthly increases in OPEC's crude oil production and exports have boosted spot cargoes to be lifted from the Middle East Gulf, requiring 168 VLCCs to load in August 2022, versus levels typically below 140 units. 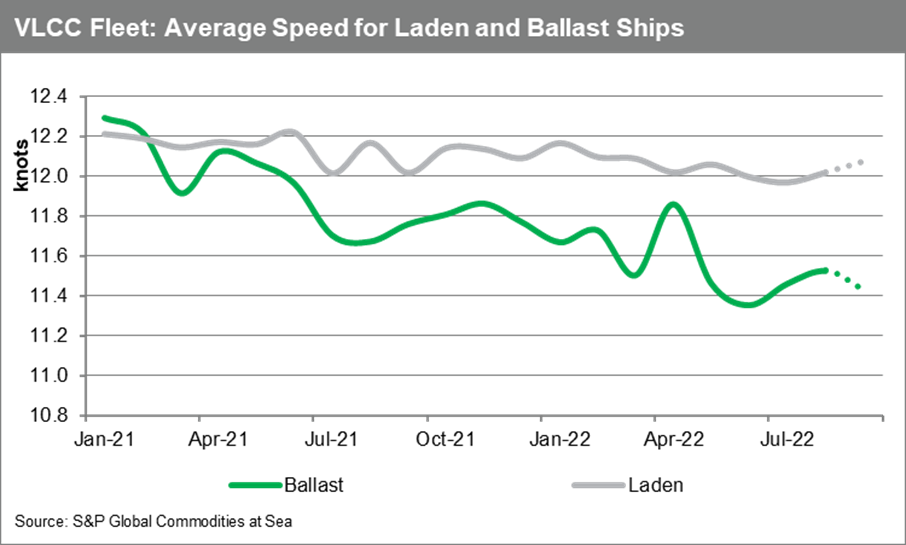 The increased demand, in combination with higher average spot tanker freight rates and lower bunker prices, have allowed some owners to marginally increase their average laden vessel speeds, according to Commodities at Sea.

The average speed of laden VLCCs surpassed 12 knots in August, after remaining below these levels in June and July 2022.

There has also been a slight uptick in ballasters' average speeds in August.

These conditions have allowed VLCC operators to successfully negotiate higher rates, especially as other operating expenses, such as insurance, have increased.

After suffering due to unprofitable freight rates for almost seven quarters, the VLCC segment experienced one of the strongest months in August, with average TCE for a typical non-eco and non scrubber-fitted ship, taking into consideration various routes, surpassing $40,000 per day. Freight rates were supported by lower bunker prices, but most notably by higher demand to lift crude oil from the Middle East Gulf, heading to the Far East. Meanwhile altered trade flows around the world, following the Russian invasion of Ukraine, have been creating new opportunities for the segment. 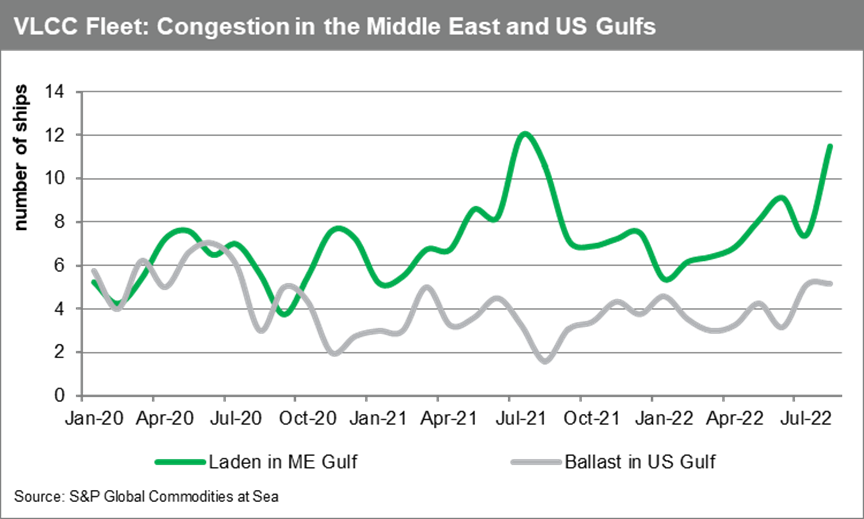 Data by Commodities at Sea suggest that an average 12 laden VLCCs were positioned in the Middle East Gulf on a daily basis throughout August, the highest since July 2021. The increased activity has added to the operational delays observed in the region.

There are also more ballast VLCCs in the US Gulf, near exporting U.S. ports. Wait times have increased due to rising cargoes to be lifted. These typically require STS activity on Aframaxes. On average, there have been more than five ballast VLCCs daily, throughout July and August, waiting to load in the region. These levels haven't been observed since March 2021, while we'd need to go further back, to June and July 2020, for the figures to be maintained above these levels for two consecutive months.

The Platts benchmark VLCC freight rate for Middle East Gulf to China (270,000 mt of crude) has been assessed near w80, or $16.5/mt, for most of the second half of August, the highest since late March 2020, when the crude market was still in contango, motivating charterers to employ larger vessels for floating storage, after global demand collapsed due to the pandemic.

The outlook for winter demand remains unclear, given ongoing macro weakness in China. Crude buying would have typically accelerated in the second half for the new year but given the current demand landscape, refinery runs as well as crude imports may only pick up slightly going into 2023.

After a rather long break -- with no newbuild VLCC orders placed in H1 this year -- Japan's Mitsui OSK Lines decided to order the construction of two LNG dual-fuelled units, scheduled to be delivered in 2025 and 2026. This was to secure replacements for two of its ageing VLCCs, rather than expanding its fleet capacity. Moreover, this allows the company to deploy some capex and reduce its income tax burden.

However, this is likely a one off rather than reflection of a wider trend, despite recent recovery in VLCC profitability.

Newbuilding prices that shipyards currently command are not attractive enough for new orders to take place. South Korean shipbuilders target deals near $140 million for the construction of a VLCC newbuilding, which is currently at the highest level in over a decade. The cost of construction for a VLCC is estimated to exceed $120 million to $130 million, with dual-fuel capability options increasing the pricetag by another $10 million to $15 million per unit.

Competition for yards from other shipping sectors, such as container ships, remains high, driven by the historical high profit margins. Interest across VLCC owners remains limited if any, with not many enquiries for more newbuildings.

The VLCC segment is believed to be placed well enough to deal with any potential global recession, mainly due to a much lower orderbook, which now represents less than 5% of the fleet (near historical lowest levels). During previous global recessions suffered since the 1990's, the orderbook was between 12% and 50% of the trading fleet. The extreme high was observed just before the 2008-crisis. The figure stood near 8% when Covid hit in early 2020.