The latest survey data indicate that Japan's economy continued to enjoy solid growth in September, but detailed Nikkei PMI data also show the upturn is losing momentum. With a solid economic expansion seen over the past two years, it is perhaps not surprising to see a moderation in growth, but the weakness seen in recent export performance could be a concern.

The Nikkei Japan Composite PMI™ Output Index slipped from 52.0 in August to 50.7 in September, posting the weakest expansion for two years. The average reading for the third quarter indicated a slower rate of growth of business activity in the economy, commensurate with annual GDP growth of approximately 1%. 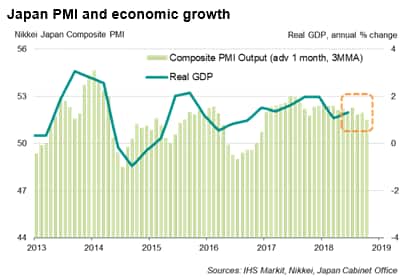 Output rose in September at the slowest rate seen in the current two-year sequence of expansion, with weaker growth reported within both manufacturing and service sectors. However, the increase in business activity continues to run below order book growth, suggesting that output could pick up as we move into the fourth quarter. In addition, there was evidence that a series of natural disasters in recent months, including heavy rains, flooding and earthquakes, caused damage to buildings and power outages, thereby disrupting business activity in both monitored sectors. That said, output should pick up once normal operations are restored.

Stronger exports have been a key factor behind solid manufacturing growth since late-2016 until earlier this year. Therefore, a further decline in export sales in September raises concerns about future output growth.

The disappointing export performance reflected softening worldwide exports, which saw the first decline in two years in September. The weakened export trend has coincided with a period of growing trade tensions between the US and its major trading partners, notably China. The Japan PMI survey showed evidence that trade wars and tariffs have partially affected demand for Japanese manufactured goods, and also contributed to pushing business optimism about the year ahead close to a two-year low. 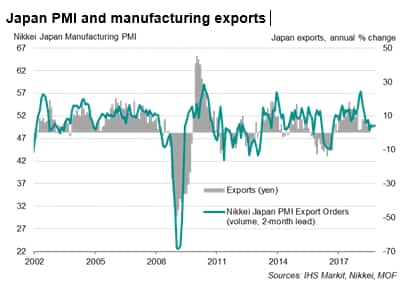 Firms meanwhile continued to raise charges in response to higher input costs. However, the rate at which selling prices rose remained consistent with annual core CPI growth of only around 1%, far below the 2% goal set by the Bank of Japan. A markedly higher level in the PMI's gauge of output prices for goods and services (an index reading of around 54 against a current reading of 52.3) needs to be seen for core inflation to reach the target rate. 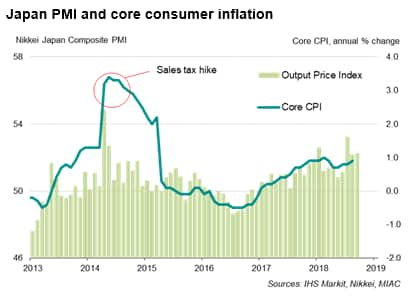 Despite expressing concerns about the impact of ultra-accommodative monetary conditions on markets and commercial banks, the central bank is likely to keep the main monetary policy settings unchanged for now amid muted inflation pressures. In order to keep the massive monetary stimulus sustainable, the BOJ took steps to mitigate negative policy effects, including adopting forward guidance on rates and implementing a wider tolerance band for government bond yields.