World exports fall for first time in over two years

Worldwide manufacturers reported the first fall in global export orders for over two years in September, according to the latest PMI surveys. The slowdown in trade acted as a further drag on factory output, order book growth and hiring. Price pressures, purchasing activity growth and supply constraints also cooled in a reflection of the wider easing in worldwide manufacturing growth.

The export decline was most evident in Asia, though showed signs of becoming increasingly broad based across the developed and emerging markets. 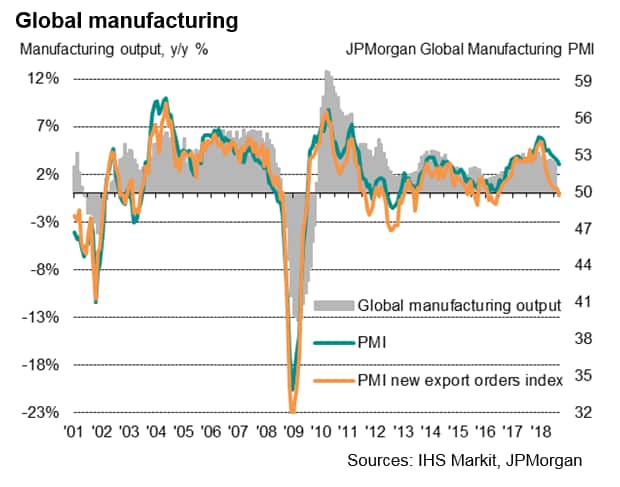 The JPMorgan Global Manufacturing PMI, compiled by IHS Markit, fell for a fifth successive month in September, down from 52.6 in August to 52.2, its lowest since November 2016.

The most notable weakening was seen in terms of new export orders, which fell (albeit marginally) for the first time since June 2016. The decline represents a marked contrast to the near seven-year high rate of increase seen at the start of this year and coincides with a period of growing global trade tensions led by the US.

Overall order books continued to grow, supported by domestic demand, but the trade slowdown meant the rate of increase slipped to the lowest for two years. Backlogs of orders meanwhile showed the smallest rise for 23 months as production expanded at a rate that outpaced new order inflows, albeit with production growth also hitting a two-year low.

Employment growth waned to the lowest for over a year as producers scaled back hiring amid weak inflows of new business and an increasingly uncertain outlook. Business expectations for the year ahead slid to the lowest since October 2016, often reflecting growing trade tensions and tariffs.

Tariffs were widely blamed for many price increases, especially metals, though higher oil prices also pushed up costs. Average input prices rose sharply again as a result, though the rate of inflation cooled slightly to a five-month low. Similarly, average selling prices rose at an historically elevated rate, though weaker than in the prior four months to add to the signs of inflationary forces having potentially peaked for now.

Some of the cooling in upward price pressures reflected fewer supply side constraints, which have enabled suppliers to hike prices amid strong demand. Supplier delivery delays, a key indicator of a sellers'- market, were the lowest for ten months.

The deterioration in trade has been most evident in Asia, where new export orders have now fallen in five of the past six months. September's decline was the steepest since July 2016. 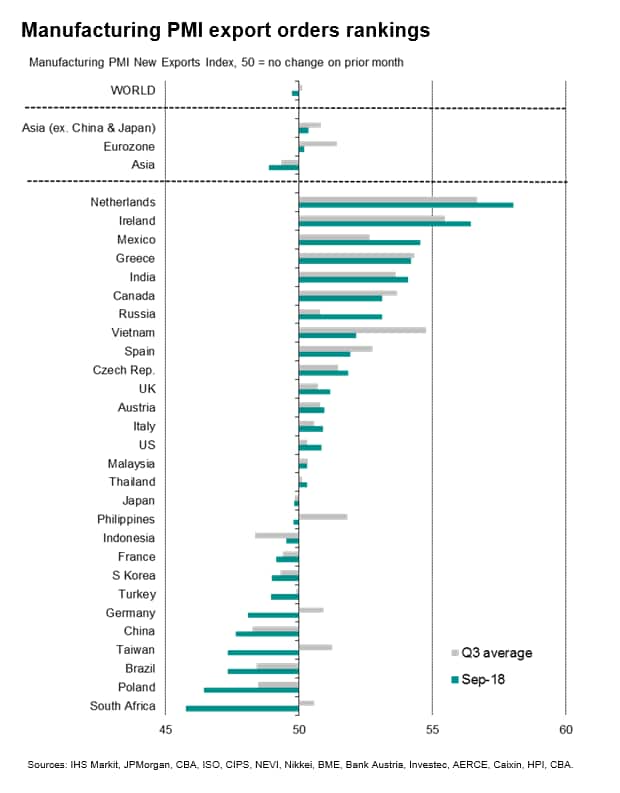 Falling exports were seen in 12 of the 28 countries for which survey data are available for in September (Australian data are published on the 2nd October), half of which were Asian, including China, Japan, Taiwan, South Korea, Indonesia and the Philippines. Near-stagnant exports were meanwhile seen in Malaysia and Thailand and Vietnamese exports slowed sharply, leaving India as the only Asian country recording strong export gains.

China's exports fell at the steepest rate since February 2016, dropping for a sixth straight month, while Japan's exports fell for a second month in a row, dropping only marginally but nonetheless representing the worst performance for two years.

US, UK and eurozone trade slowdowns

Export performance picked up in the US and UK but remained lacklustre by recent standards, with the latter rounding off the worst quarter for just over two years.

Trade was more mixed in the eurozone, which as a whole recorded the weakest export orders growth since June 2013. However, strong trade growth continued to be seen in some countries such as the Netherlands and Ireland, contrasting with declines registered in France and Germany.

Measured across all emerging markets, exports fell at the fastest rate since June 2016, while exports from developed world manufacturers showed the smallest - only marginal - increase since May 2016. 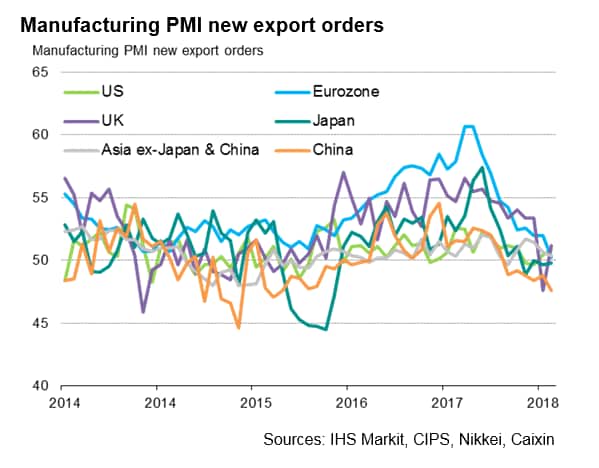 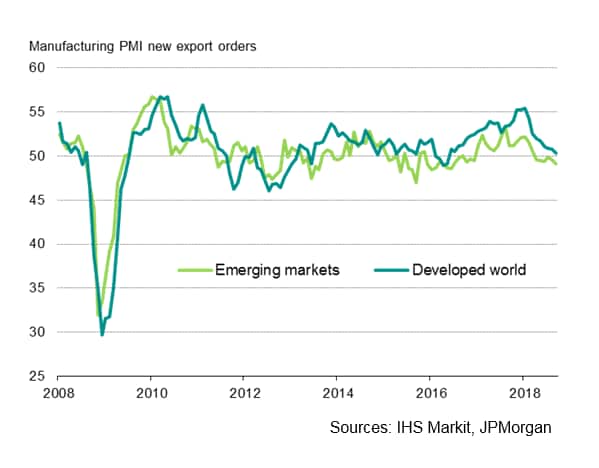 Special Focus reports on European business conditions and Global Manufacturing in our latest Week Ahead, ahead of M… https://t.co/ajFt1bUihb

🇧🇷 Brazilian service sector remains mired in a downturn according to the latest #PMI, with the Business Activity In… https://t.co/gyE6MFru44

🇬🇧 UK Services Business Activity #PMI posted 47.1 in June, up substantially from 29.0 in May, to signal a much soft… https://t.co/uQaXZNhdYq

🇨🇳 #China's service providers signalled the sharpest increase in activity for over a decade in June, according to t… https://t.co/KtjN1vpApR