This article serves as an update to our previous article Convergence of LIBOR fallback spreads published in November 2020.

On 5 March 2021, the Financial Conduct Authority (FCA) UK announced the cessation of most LIBOR settings by the end of 2021 and the cessation of the remaining (USD) LIBOR settings by mid-2023 [1]. While these cessation dates have largely been anticipated since November 2020, the FCA announcement set these dates more or less in stone and removed any uncertainty about the size of the LIBOR fallback spreads. The fallback spreads are key ingredients of the ISDA LIBOR fallback supplement and protocol and are tied by design to the timing of the cessation announcement [2].

Prior to the cessation announcement, a gauge for the size of the fallback spreads expected by the market could be obtained by observing the par-spread implied by forward starting risk-free rate (RFR) -LIBOR basis swaps. These implied spreads seem to have largely converged to the fixed fallbacks spreads since the day of the cessation announcement. In some cases, such as JPY and GBP, the implied spreads have been relatively 'on target' for a while and lie within less than 1 bp of the respective fixed LIBOR fallback spreads. In other cases, such as JPY and USD, clearly corrections towards the fixed fallback spreads occurred in the aftermath of the announcement. Interestingly, as of 10 March 2021, a gap of about 1.5 bp between implied and fixed USD LIBOR 6M fallback spreads persists (see figure below). The gap might close as time goes on and in part may reflect the possibility of a further delay in the cessation of USD LIBOR settings; the USD LIBOR 6M fallback spread, however, remains fixed [3]. 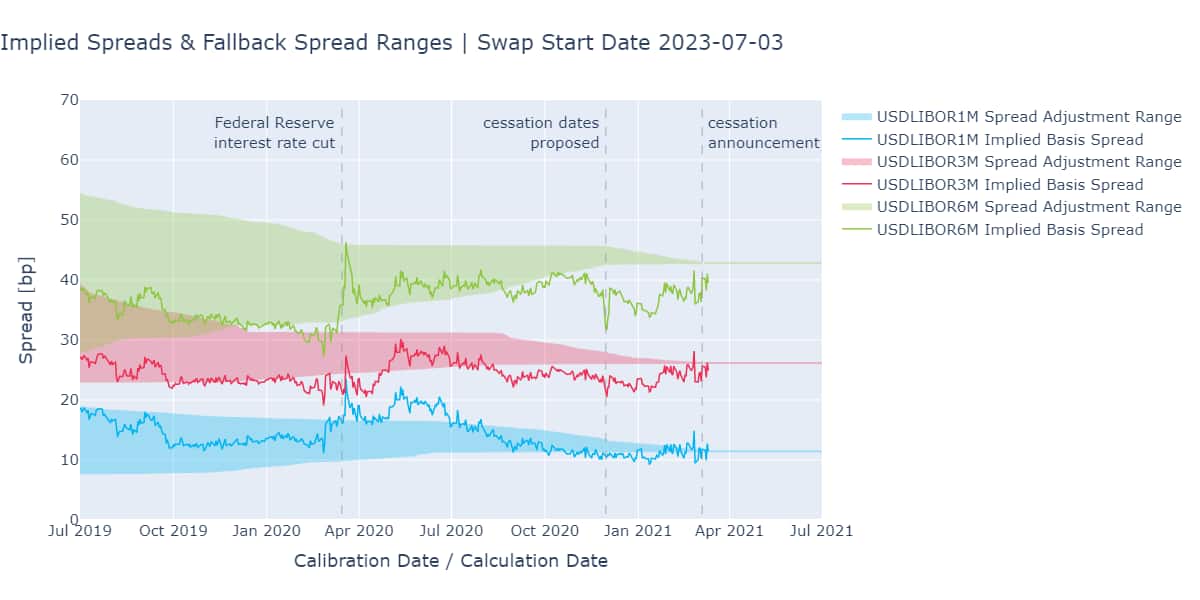 With the cessation announcement behind us, attention will likely focus now on other outstanding LIBOR transition topics such as the introduction of synthetic LIBOR and the issue of RFR-based term rates.