The latest IHS Markit flash PMI showed Japan's private sector activity slumped further into contraction in February, with the au Jibun Bank Flash Japan Composite PMI falling to the lowest since June 2020 at 44.6. This also marked a second consecutive month of private sector output contraction, as a quasi-state of emergency implemented across the majority of Japan's 47 prefectures in end-January due to soaring COVID-19 cases dampened economic activity

In contrast, the IHS Markit Flash Australia Composite PMI indicated a return to expansion for Australian private sector output in February following a brief, but sharp, decline in January. This was in tandem with the improvement in COVID-19 conditions in Australia as new case numbers receded significantly from the January peak. Absent new restrictions, the data suggest the Australia economy has returned to a recovery path. 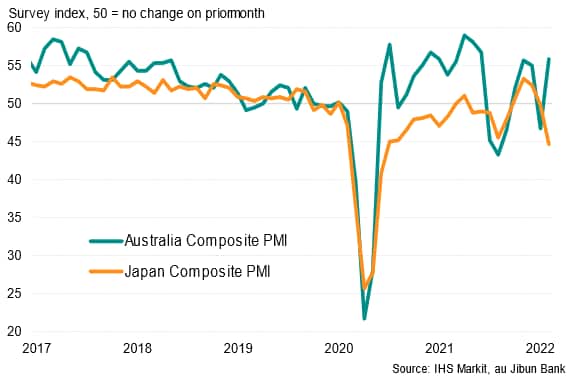 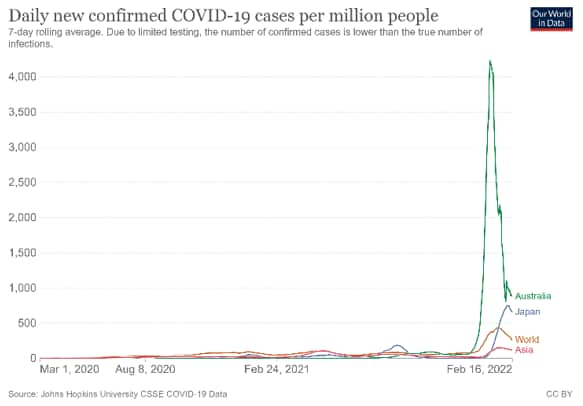 Breaking down the performance by sectors, the differentiation in private sector performance between Japan and Australia was most apparent across their respective service sectors.

Both manufacturing and service sector output returned to expansion in February for Australia, with production efforts significantly improving as COVID-19 disruptions eased. Service sector business activity in particular reflected the short-lived nature of the Omicron wave, bouncing back strongly into expansion. 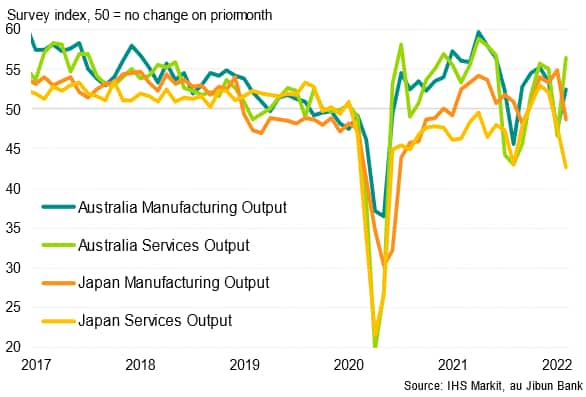 In Japan's case, however, the relative lag of the COVID-19 Omicron wave, coupled with the reimposition of restrictions, meant that services activity was hit harder. The au Jibun Bank Flash Services PMI Business Activity Index in fact dropped to the lowest seen since May 2020, surpassing the August 2021 trough. Japan's manufacturing output likewise declined, as a result of disruption to production and supply chains, even as the headline au Jibun Bank Manufacturing PMI remained in expansion territory.

It was also observed that with the COVID-19 wave, the pressure upon prices shifted from input costs to output prices.

On the other hand, Japan, which followed closely with the Omicron wave crashing upon its shores later in January - and cases seemingly peaking in February, found input prices to have risen at the fastest rate in at least 13 years according to the latest flash PMI data. Disruptions to supply chains and shortages of input materials, aggravated by the COVID-19 pandemic, powered the surge in input prices. It will be important to observe how these are passed on to clients in the coming months, as in the case of Australia. 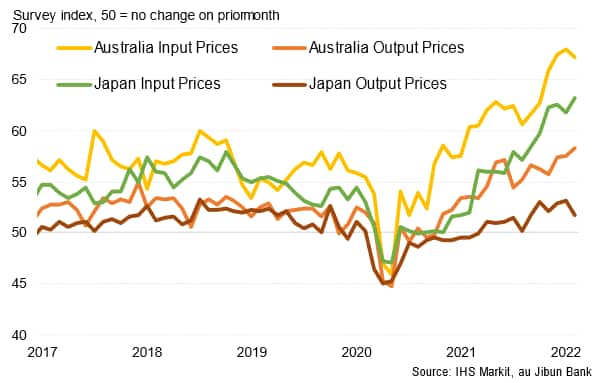 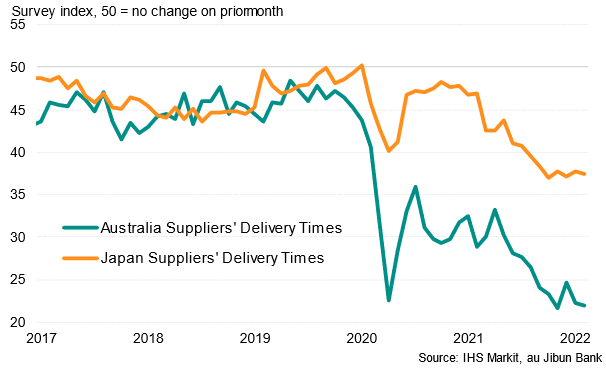 Employment conditions remained positive in the face of the Omicron wave

Despite the varying degrees of Omicron variant disruptions, employment conditions improved across both Japan and Australia. Manufacturing employment growth slowed in Japan, but were largely attributed to difficulties in replacing retiring or job-switching employees. Service sector employment levels were almost unchanged in February, improving from the state of decline in January.

In Australia, the signs were more encouraging, with both manufacturing and services firms hiring at strong rates in February despite reporting difficulties in securing skilled staff, thus reflecting the robust employment conditions and business confidence amongst private sector firms as the COVID wave eased.

Easing of entry restrictions for foreigners will also be conducted across both Japan and Australia into late-February, which is expected to provide some relief towards manpower constraints across both APAC regions and potentially support output growth. 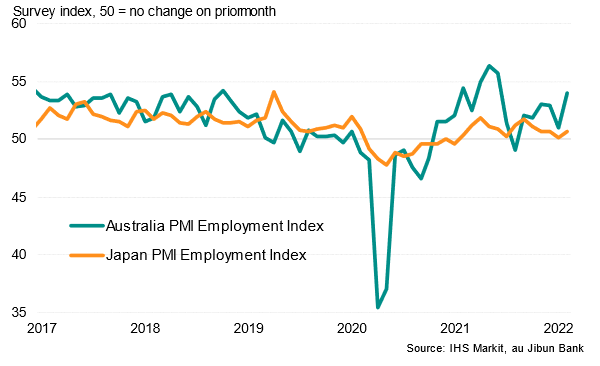 While Australia's Future Output Index picked up from January's 21-month low, private sector firms in Japan were the least upbeat since January 2021. Concerns with regards to the latest Omicron variant's disruption to the Japanese economy weighed on the minds of purchasing managers. That said, early indications of the latest COVID-19 wave turning a corner in Japan offers some hopes for imminent recovery. Based on Australia's experience, the recovery from the Omicron wave can be short-lived with the corresponding easing of restrictions. 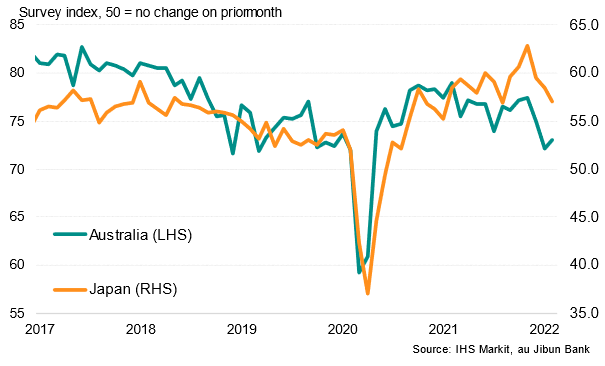