The headline au Jibun Bank Manufacturing PMI remained in expansion territory at 52.9 in February according to the preliminary 'flash' reading, albeit down from 55.4 in January. However, a deeper dive into the survey sub-indices reveals how factory production levels fell during the month due to a worsening of the supply chain situation. These supply delays in turn led to the steepest rise in producer input prices for almost 14 years. Future output expectations meanwhile slumped on the supply chain deterioration.

However, some of the other survey sub-indices - including the five sub-indices which comprise the headline PMI - reveal scope for encouragement that the downturn will prove short-lived, notably via a record level of inventory building and sustained job growth. 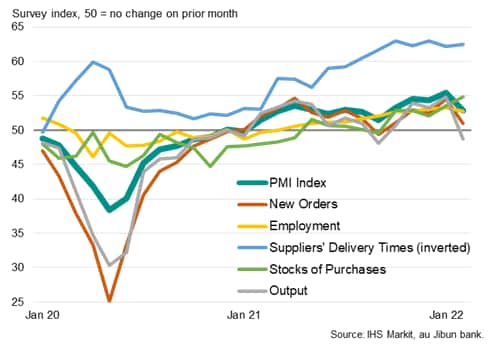 The biggest drag on the headline PMI in February was a fall in manufacturing output, as the Omicron wave of the COVID-19 virus disrupted production and supply chains.

The survey's production gauge fell into decline - dropping below the 50.0 neutral level - for the first time since the Delta wave disruptions seen last September. 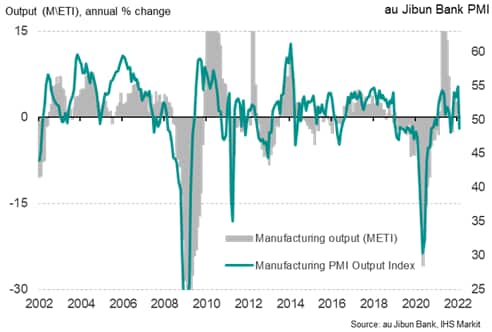 Of those firms reporting lower output, just over 40% reported that production had fallen due to a shortage of components or other raw materials. A further 44% reported output to have fallen due to deteriorating demand. However, in many cases this drop in demand was directly linked to customers halting orders due to the pandemic having disrupted their own production supply chains, notably in the auto sector via an ongoing lack of semiconductors.

The survey consequently showed the incidence of supply chain delays remaining close to all times highs in February, with suppliers' delivery times in fact lengthening to a slightly greater degree than January to indicate a worsening of the supply chain situation.

These ongoing shortages were often cited as the main reason that suppliers had been able to hike prices. Average input costs paid by manufacturers rose in February at a rate not seen since August 2008. 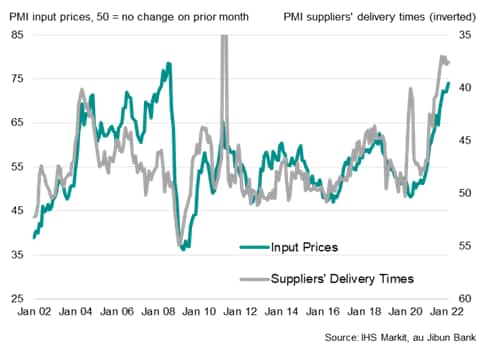 Concerns over the supply situation and escalating price pressures prompted the additional buying of safety stocks where possible. Inventories of purchased inputs consequently rose to a degree not previously recorded over more than two decades of survey history. 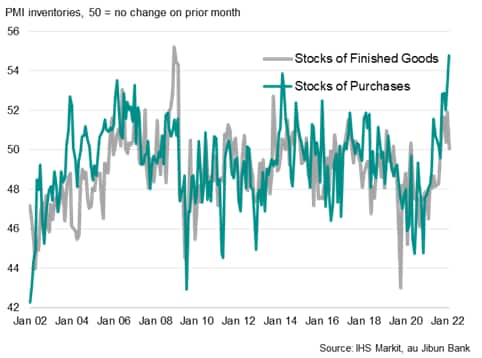 Despite this additional stock building, overall growth of new orders at Japanese manufacturing firms grew at a reduced pace in February, with the survey's new orders index down to the lowest since last September.

Export growth likewise waned in February, slipping to a four-month low as companies often reported the Omicron wave to have dented foreign demand. 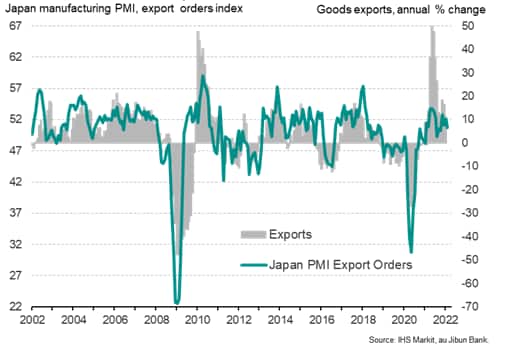 With the supply crisis worsening in Japan and demand faltering amid the Omicron wave, manufacturers' expectations of future output in the year ahead fell sharply in February, dropping to the lowest since January of last year. 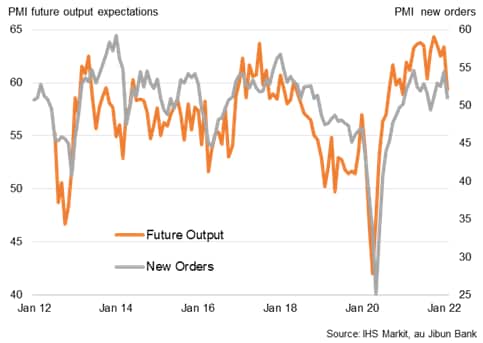 The deterioration in business optimism contributed to a pull-back in hiring among some firms, resulting in the smallest net increase in manufacturing employment recorded since last November. However, of those firms reporting an actual drop in headcounts during February, all reported that the decline was due to the inability to replace retirements or leavers rather than redundances. 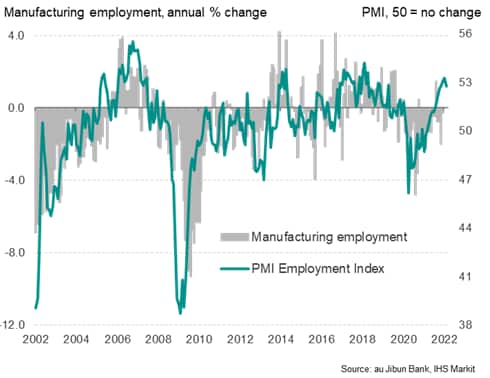 Despite the drop in optimism for the year ahead, the sustained job creation and lack of deliberate headcount reduction signalled by the survey in February are encouraging signs that production will rebound in coming months once the Omicron wave passes. Similarly, the record inventory building supports the view that firms are gearing up for fresh production growth ahead.

With the Omicron wave receding, albeit with case numbers remaining high, the supply chain and labour market constraints should ease in coming months, facilitating this return to production growth. 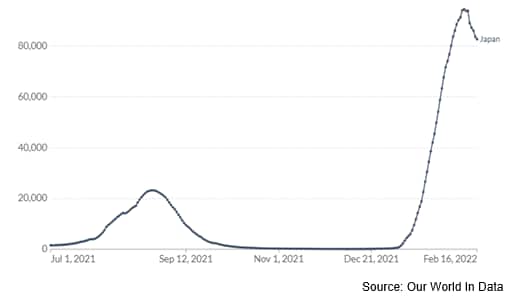