Record high job vacancies and low unemployment have led to the tightest labour market in at least two decades, in turn driving wage growth at a level rarely seen since 2008. This solid wage growth is likely to persist in coming months, but there are signs that the rate of increase may soon peak, with survey data registering not only a moderation in the rate at which staff availability is deteriorating, but also a cooling in growth of demand for staff.

Recent signals will inevitably have been blurred by the disruptions both to economic activity and labour markets caused by the Omicron wave, meaning the data flow in the next 2-3 months as the wave recedes could prove crucial in understanding the underlying trend in wages and the labour market.

The vacancy ratio is at an all-time high, pointing to higher pay growth 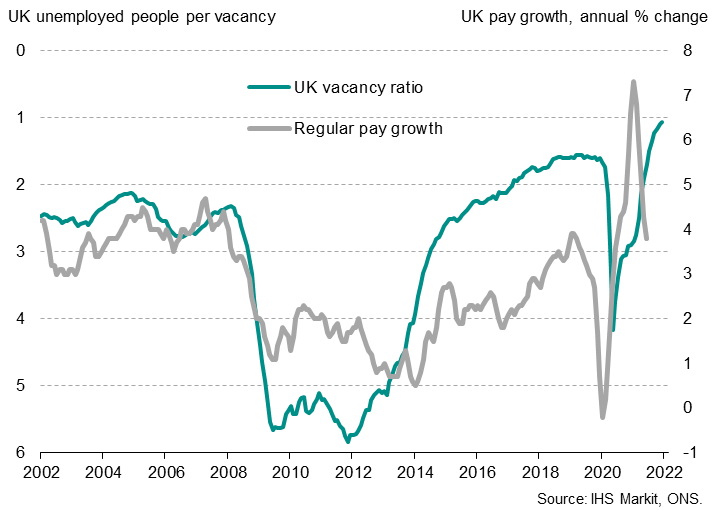 It is important to bear in mind that the pay data have been volatile since the pandemic. Most notably, a fall in pay was recorded in the lockdowns of early-2020, which led to a commensurate rebound in the annual rate of change in 2021. Although easing from this rebound, pay growth is still running at levels rarely seen since the lead up to the 2008 global financial crisis.

The pay growth data are important as they are seen as a key mechanism by which inflation֪ currently running at a three-decade high of 5.4%, could become more persistent, as rising wages and prices feed off each other in a wage-price spiral. Such a scenario traditionally requires a tight labour market, which gives workers greater pay bargaining power.

Worryingly, the labour market has tightened to its highest since comparable data were available over two decades ago. The number of unfilled vacancies rose to an all-time high of 1.298 million in December (data were first available in 2001). The number of unemployed people aged over 16 meanwhile fell to 1.374 million. The resulting ratio of unemployed per vacancy fell to the lowest on record.

Such a tightening of the labour market is in line with the signals from the recruitment industry survey conducted by IHS Markit on behalf of REC and KPMG. The survey has shown strongly deteriorating availability of staff to fill positions in recent months, with widespread shortages persisting into January. This hints at the vacancy ratio continuing to run at a record level, and possibly falling slightly further, to thereby maintain the upward pressure on pay.

Recruitment industry staff availability has continued to deteriorate into January 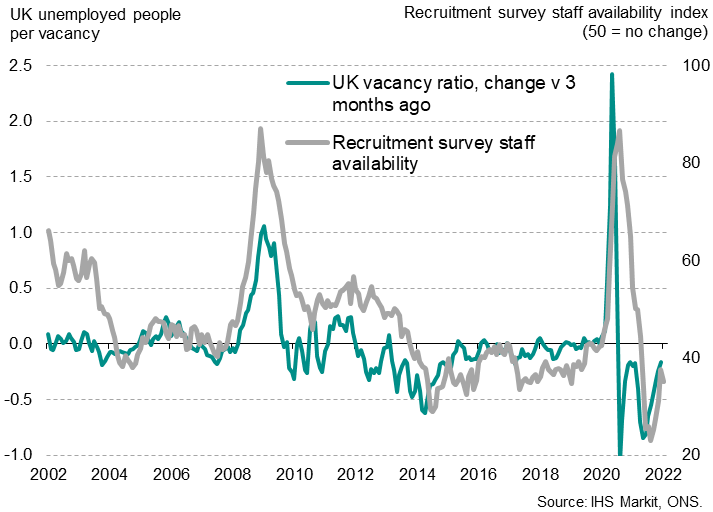 However, there are encouraging signs that we are seeing pay growth peak. Although the official data tracking the annual rate of pay growth may yet rise further in the near term due to the lag compared to survey data, an easing in recruitment industry pay gauges - both for permanent and temporary staff - suggests that pay growth stopped accelerating on a month-on-month basis in January (though it should nevertheless be noted that the pay growth indicators form the recruitment survey remain higher than at any time ever recorded prior to the pandemic).

Survey data hint at a peaking of pay growth 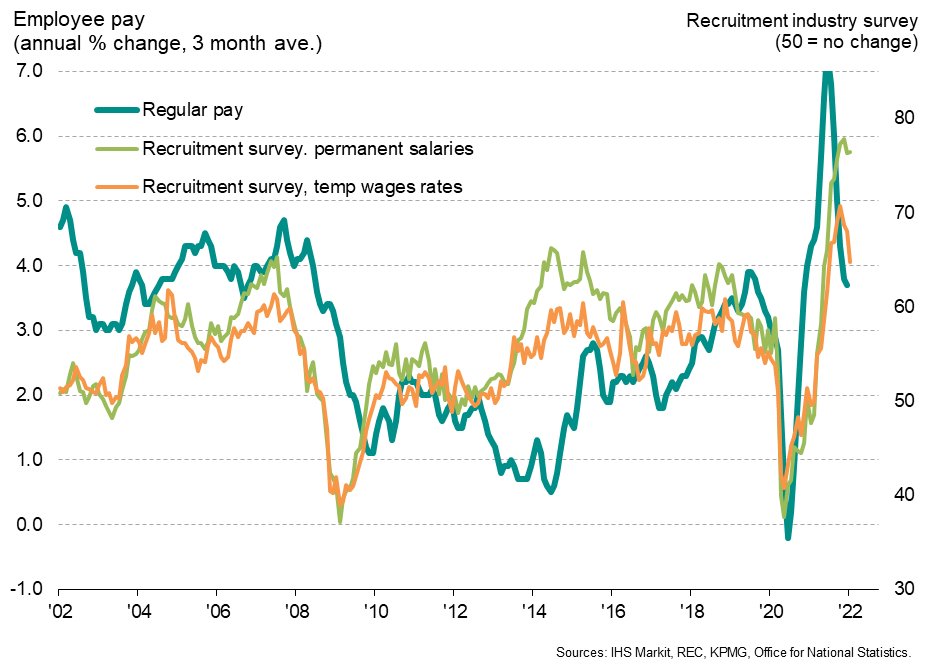 There appear to be two forces driving pay growth lower in the recruitment industry survey.

First, although staff availability continues to deteriorate, the rate of deterioration has eased compared to the peaks seen last year, albeit ticking up slightly in January as the Omicron wave led to a renewed drop in the supply of labour.

Second, growth in the demand for staff from employers has also started to cool. Having hit the highest for over two decades last year, the rate of demand growth peaked back in August 2021 and has since been on a moderating trend. In January, it was rising at the slowest rate since last April, albeit still running at a pace exceeding anything seen prior to the pandemic.

Demand for staff is growing at a slower rate, helping take the pressure of pay growth 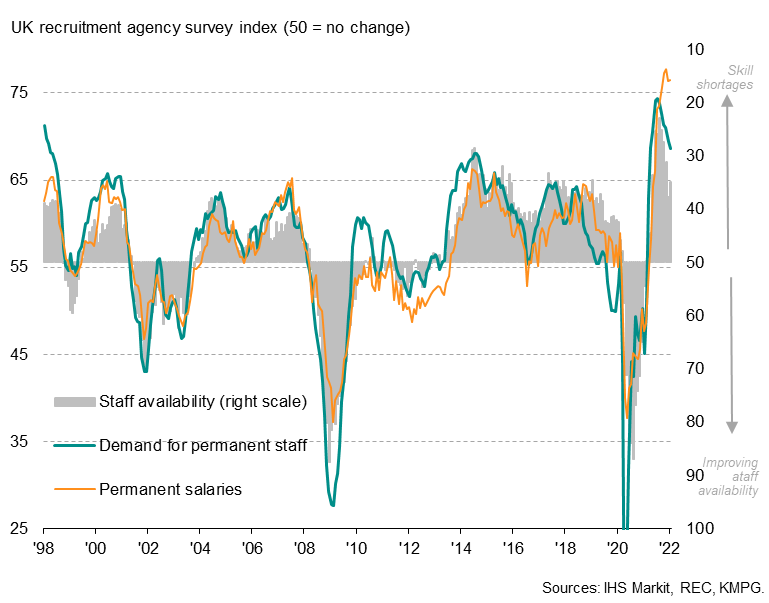 The slowing in growth of demand for staff largely reflects the peaking in the pace of economic growth around the middle of last year. While economic growth has exhibited encouraging resilience amid the Omicron wave, the rate of expansion has slowed compared to peaks in 2021, causing a reduction in growth of employers' need for additional staff. Historical comparisons also indicate that recruitment is running at a faster pace than one would normally anticipate, given the pace of GDP growth, further suggesting that hiring could moderate further in coming months. 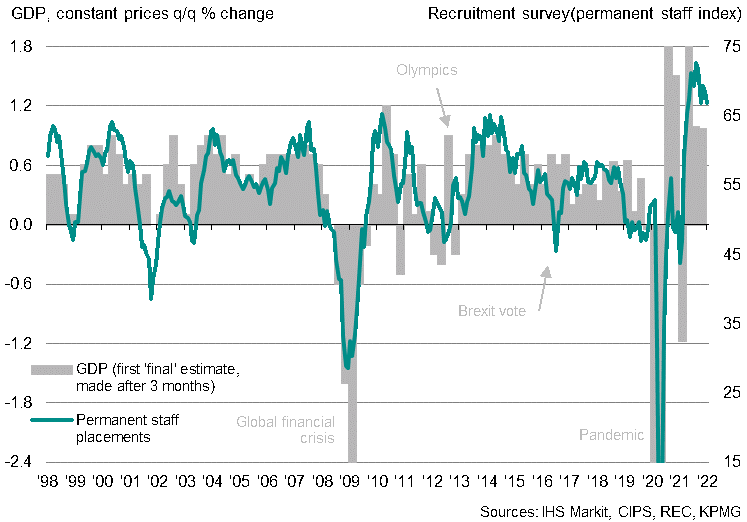 Meanwhile the fading Omicron wave should help improve the supply of labour available to fill vacancies, albeit with concerns persisting of a permanent (or long term) reduction in the labour force, in part linked to declining participation among the older population.

How these forces play out will be key to policymaking and interest rates, but will also be important in assessing the degree to which incomes are being squeezed. With pay growth lagging inflation, real underlying pay growth is now falling at the fastest rate since 2013. Such a squeeze threatens to dampen economic growth. 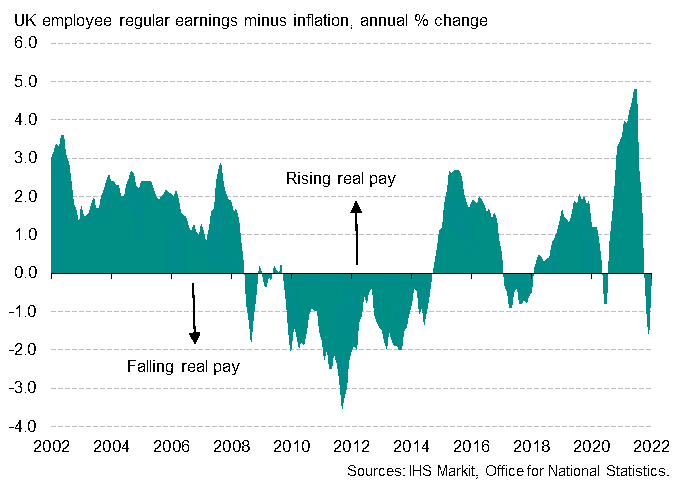 Key indicators to watch in relation to the pace of economic growth, hiring, staff availability, prices and wages can be found in the PMI and recruitment industry survey data, next updated for February on 21st February and 10th March respectively.