Get Expert's Insight of the Latest Steel Market Trend

What does this mean for prices?

Having questions about the global steel market? Connect with our experts now!

Talk to an expert now

Follow steel pricing across the globe with Commodity Price Watch

Wish to stay current with monthly curated content exclusively just for you?

Steel prices are expected to recede from the third quarter of 2021 through the end of 2021. Asia and Europe will experience the relief sooner than the US. Prices of stainless steel, bar and rod, steel scrap, and steel sheet are expected to decline over the second half of the year.

What is the latest global steel market overview?

Steel market in Asia and Europe are likely to experience a relief in the third quarter of 2021, except for the United States (US) which is delayed until later in the year due to supply shortage, increase in scrap metal prices, and suppressed imports from Asia due to logistics issues.

Steel supply outside North America is improving and prices will turn downward in the third quarter, although the rate of decrease will vary by region. Mainland Chinese steel market demand has been slowed owing to the end of the spring construction season and the onset of the monsoons, muting steel market prices throughout Asia. On the other hand, strong demand owing to the beginning of construction season as well as tight supply has been driving steel prices up in Europe, although the southern European mills will stop this trend from becoming excessive. Steel is rising in North America, with (hopefully) the last round of price hikes for most products. Locking now will mean overpaying during the second half of the year. Either buy on spot or be sure your contract has an escalator clause because in coming months it would act as a de-escalator. Supply chain disruptions have delayed expected declines, but fundamentals of supply and demand still point toward a turning point in coming months.

A deeper dive into the steel prices forecast and analysis

Stainless steel prices rose to their highest level since 2014 in the second quarter as raw material costs spiked and sellers increased base prices and margins as supply tightened. While the forecast has been revised higher, our view is that most of the upward momentum is over and stainless prices will moderate over the third and fourth quarters as, especially in Europe, as demand growth begins to slow, domestic production picks up, and imports start to rise.

Preference for higher-grade and direct charge iron ore has been growing in recent years and is expected to persist as mainland Chinese mills continue to shut down small blast furnaces in favor of large-scale operations, which require more quality iron ore blends. Prices for iron ore are forecast to decline from current levels to average $200/metric ton in July 2021 before sliding through the third quarter to end of 2021 at around $155/metric ton. 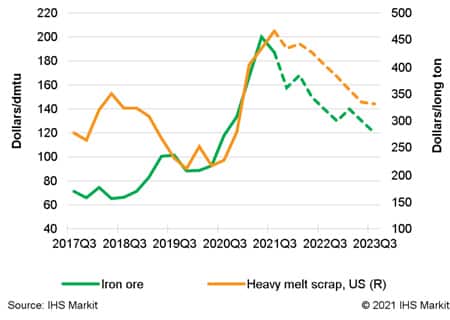 Seaborne scrap prices appear to be anchored to iron ore prices and are therefore unlikely to be bid up in line with US finished steel prices. With steel prices starting to roll over outside of the US, the end is in sight for this bull move in scrap pricing. This said steel scrap will not crash back down to earth but instead drop in line with the iron ore price correction, i.e., about 22% by the year's end. 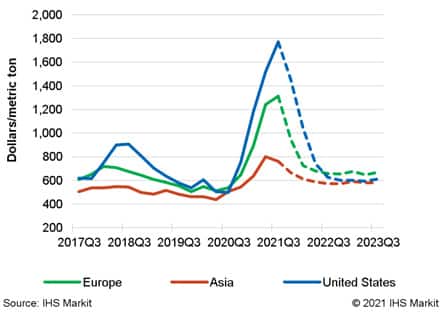 European production continues to improve so supply will replenish, and prices will fall. Safeguard tariffs were extended for three years based upon faulty analysis, but the improper decision still stands even after the mistake was acknowledged. The extension caused us to impose a slower rate of decline for Europe, but not to remove the decline. Prices will fall regardless; it is a matter of timing and pace.

The Western Hemisphere remains expensive because of problems in the US. US production of sheet continues to lag, although it is finally rising. Supply balance will not be restored without imports. Luckily, import tonnage was good in April and appears to have been good again in May. A real surge appears imminent for August and September based upon import licenses already issued and reliable reports of current bookings for early autumn delivery. As imports arrive, prices fall.

Finally, the expectation of additional tonnage in North America is coming true. Ternium’s new mill in Mexico is deep into test tons and should be fully contributing to the current steel market by the third quarter. The mill has capacity of over 4 million metric tons per year. SDI Sinton is on pace for third-quarter test tons and fourth-quarter commercial production, with capacity of 3.2 million tons. Nucor Gallatin should be commercial by early 2022, adding another 1.4 million tons. More capacity is due for 2022. Tight sheet should move to surplus sheet by early 2022.

Bar, rod, and structural are a bit better from flat products. Prices are the highest since 2011, so “better” is a relative term. Prices are expected to decline over the second half of the year, but this is completely dependent on input costs for iron ore and scrap.

Demand in the Chinese steel market is fading, because of the onset of the monsoon season, and demand has lulled, partly because of seasonal factors and the 100-year anniversary celebration of the Chinese Communist Party (CCP). However, in the early fourth quarter, with the end of the monsoon season, we expect a slight uptick in prices, as construction season begins anew with demand increasing, fueled also by the announcement that the bank reserve requirements will be lowered by 0.5 percentage point, to bolster slowing economic growth.

Rebounded construction in Europe has led to increased prices, particularly in the Northwest where supply has been tight. However, the supply issue can be addressed through mills in southern Europe. Renewed EU safeguard measures prevent alternative supply options.

In the US, we see price increases because of supply-chain issues and increases in the prices of scrap. Most mills have low availability and are sold out one to two months ahead. Domestic sellers' favorable position has yet to deter buyers, and demand is firm. Longer lead times have made imports unattractive as customers are reluctant to lock in orders at such high prices.

Current steel price and market update in a nutshell

Strong global production will start to alleviate supply shortage and allow steel market prices to retreat over the second half of 2021. The exception is the US, where key steel capacity remains idle, scrap prices are increasing, and imports are suppressed by logistics problems.

For further information on how steel and non-ferrous metals are taking divergent tracks, listen to our Steel Experts John Anton and John Mothersole. 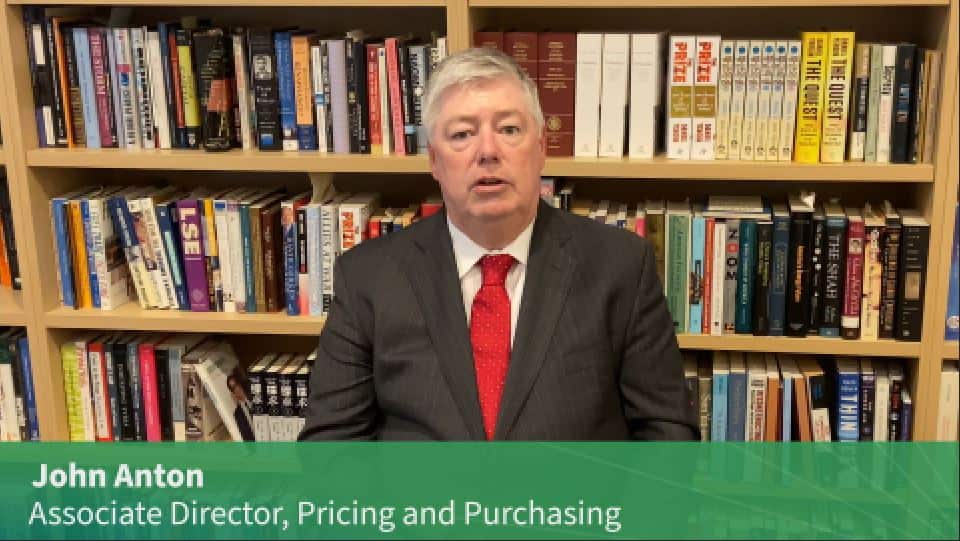 Episode 91: Commodities may have reached their peak - Looking at the signals

Around the World: Light Vehicle Sales and Production Webinar - May 2021

18 May 2021 | Global The Light Vehicle Sales and Production Webinar from IHS Markit provides an in-depth view of the world's automotive markets straight from our experts.
Learn more

Mr. Anton has expertise in the ferrous metals industry, he is responsible for evaluating the outlook for steel. He also specializes in forecasting commodities and works closely with the Automotive, Construction, Energy and Economics teams at IHS Markit. Steel demand is linked to outlooks from these key sectors. In turn, the profitability of these sectors can rise or fall depending on the price and availability of steel.Prior to joining IHS Markit, now IHS Markit, in 1995, he was in the private practice of law as well as an economist and statistician for the United States Department of Labor in the Bureau of Labor Statistics (BLS). Mr. John Anton received a Bachelor of Science in Economics from Florida State University, US, and a Juris Doctor from the Marshall-Wythe School of Law at the College of William and Mary, US.

As director of research, Mr. Mothersole sets and executes research priorities to identify potential supply chain risks and opportunities. His other duties include providing inflation analysis for the US Economic Forecasting Service, World Industry Service and the metal price forecasts within the Global Link Model at IHS Markit. He is directly responsible for nonferrous metal forecasts. He has more than 30 years of experience in price analysis and price forecasting. A member of the National Association of Business Economists (NABE), Mr. Mothersole holds a Bachelor of Arts and Master of Arts in Economics, both from the University of Maryland, US.

Bringing more than 20 years of experience, Carlos shares his expertise in policymaking and its impact on energy and infrastructure in Brazil

Christoph has more than 25 years of experience researching and writing specialist news and analysis for and about the ethanol, sugar and fee

Alun is a Specialist in European gas and power markets, with over a decade of experience in the energy sector. Alun also plays a significant

Sergey has 10+ years' experience researching and analyzing agricultural markets. He is responsible for price forecasts, fundamental and tech