IHS Markit predicts significant growth in European renewable energy by 2030, despite an undefined coal phaseout and EC policies in flux. In the absence of community agreement, EU member state policies remain the key drivers to shape the power market. Changes vary widely on a country-by-country basis, with the UK reduction in energy demand raising concerns for energy producers about the long-term outlook. A surprising high carbon price rise warrants closer examination of any potential risks.

On the positive end of the equation, the potential for rapid offshore wind expansion is a hot topic closely intertwined with new German targets to move to 65% RES-E in 2030, which would significantly increase exposure for both thermal and renewables generation. Some scenarios reveal that more than 95W of wind and solar additions might be needed to meet the ambitious EU renewable energy targets. The scale of risk depends upon cross-border interconnection additions to absorb potential oversupply, instead of dampening prices or requiring curtailments.

IHS Markit assists energy and power market participants to assess which business models/technologies will be robust and deliver financial returns in the new European renewables environment given a wide range of future scenarios.

Key issues under examination include:

Could the United Kingdom provide a signpost for future demand trends? Or is the UK decline in demand unique? Despite three years of recovery, electricity demand in the European Union remains 3.5% below the historic peak (100 TWh). While GDP and electricity demand typically go hand in hand, the EU’s electricity demand growth has lapsed its GDP growth rate in recent years. Alone of the large developed markets, United Kingdom has continued to experience declining electricity demand. Demand has been falling in all sectors since the mid-2000s and now hovers at 1995 levels. Drivers of the decline are unclear, but energy efficiency might offer an explanation with relevance for European Union plans for renewable energy. 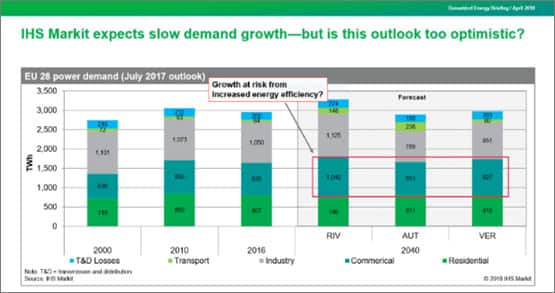 What will renewables additions in Europe mean for wholesale prices, captured prices and thermal profitability? In the July 2017 outlook and European renewable energy statistics, three-quarters of all EU 28 capacity additions through 2040 were expected to be from renewables and storage, which represent 62% of installed capacity by the end of the period. Declining costs for renewables and batteries, combined with stronger climate targets and increased facilitation of self-consumption will lead to higher renewable additions in our 2018 update.

What is the impact of Germany meeting a 2030 65% renewable electricity target (65% RES scenario) vs the Rivalry scenario outlook? IHS Markit reviews the drivers of wholesale prices, implications for capture prices and revenues for thermal generators in IHS Markit scenarios. 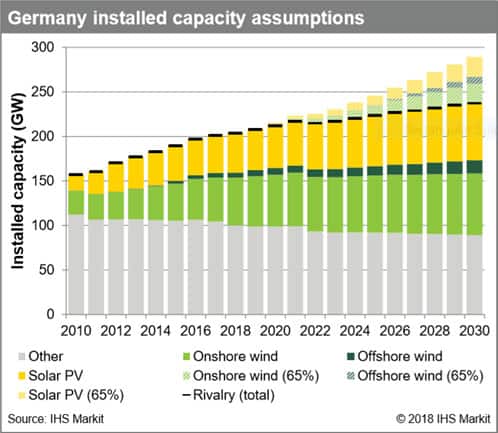 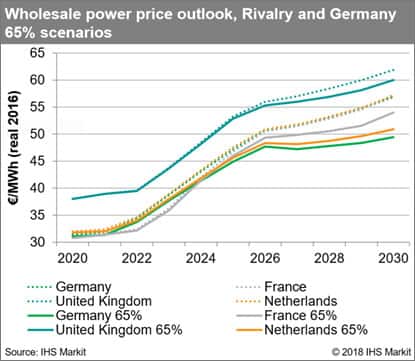 EDM for Energy: Data Management in a Multi-Application Environment