Our goal is providing energy and marine professionals, as well as investment, equity and trading leaders, with the information and decision-making support they need to minimize risks, disruptions and potential costs and facing their organizations during this market readjustment.

We invite you to bookmark this page and check back regularly for our latest research, forecasts and thought leadership on the IMO sulfur cap and the outlook for marine fuels.

Are you ready for the 0.5% sulfur spec for bunker fuel? 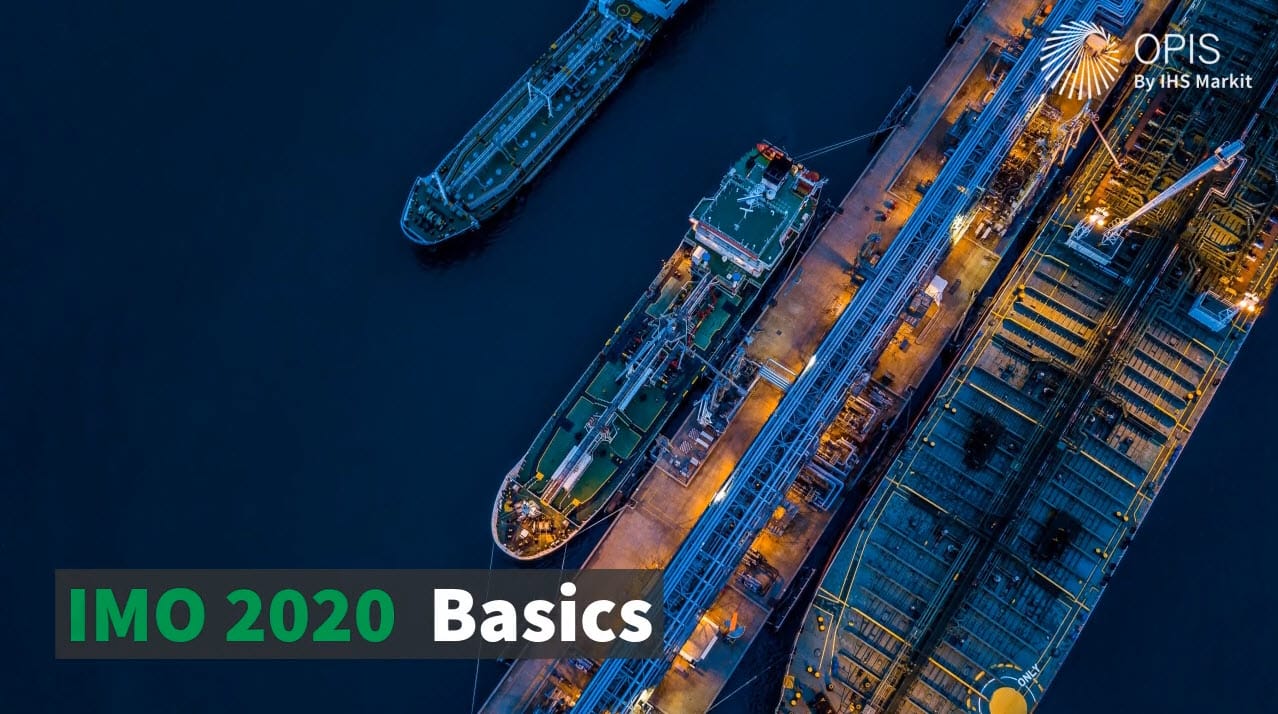 Understand how storage of high-sulfur fuel oil might address some oversupply during transition period, including role of market timing structure and flat price risk in estimating the suitability of this option.

Anticipate the influence of IMO 2020 regulations on crude oil quality and production, including detailed supply/demand forecasts.

Learn about refinery blending components for the new formulations of bunker fuel and their potential compatibility, handling and other fit-for-use issues.

Get a high-level review of the recent CO2 emission reduction targets, set by the IMO for 2030 and 2050, known available methods for compliance, and influence on ship owner strategies for the 2020 low sulfur bunker fuel transition.

Our insight to support your decisions

What is the International Marine Organization (IMO) regulation?

With a 1 January 2020 compliance deadline, the International Marine Organization (IMO) 2020 regulation has set more stringent global regulatory limits on sulfur in fuel oil used onboard ships to be 0.50% m/m (mass by mass) for ships operating outside designated Emission Control Areas (against the current limit of 3.50%, which has been in effect since 1 January 2012). The change is called IMO 2020.

The intent of the regulation is to provide environmental and health benefits for ports and nearby coastal areas by progressively decreasing emissions produced by heavy bunker fuels, referred to by the IMO as “Sulphur Oxides (SOx) and particulate matter (PM).”

The IMO a specialized agency within the United Nations charged with the safety and security of shipping and the prevention of marine pollution by ships. The IMO has stated that the new global limit “will not change the limits in SOx Emission Control Areas (ECAS) established by IMO, which since 1 January 2015 has been 0.10% m/m. The ECAs established under MARPOL Annex VI for SOx are: the Baltic Sea area; the North Sea area; the North American area (covering designated coastal areas off the United States and Canada); and the United States Caribbean Sea area (around Puerto Rico and the United States Virgin Islands).”

His current regional leadership role includes advising clients across a wide range of oil markets and downstream issues; offering techno-economic and strategic business advice on responding to structural changes in the industry; building new investment cases or assisting in the valuation of potential acquisition targets. He previously led global short-term oil market analysis. He has managed a number of large consulting project, include national strategy projects. He brings more than 25 years of downstream technical, operational and economic experience to his role at IHS Markit. Mr. Welch held posts with independent oil refiner, Petroplus at Coryton Refinery, UK, prior to joining IHS Markit in 2011. During 13 years with BP at a variety of locations, he held downstream roles, including refinery process engineering, production planning and operations management. During that time, he developed specialist knowledge in reforming, isomerization and hydro-processing, and he gained a broad knowledge of most other refinery processes and linear programming, he also has fuel storage project management experience. Mr. Welch holds a Bachelor of Engineering (B.Eng.) from Loughborough University, UK, and the Master of Science (M.Sc.) Engineering Management degree from Bristol University, UK.

Mr. Barrow is responsible for IHS Markit research of crude oil, NGLs, refining, and petrochemical feedstocks. He also has responsibility for joint mobility research offerings with the automotive team at IHS Markit. Mr. Barrow’s expertise includes refining economics, energy policy, and price forecasting. He is active in downstream research and oversees a global team conducting expert-based analysis and analytical modeling of market and industry fundamentals. Mr. Barrow has written extensively on the International Maritime Organization 2020 bunker fuel topic and the influence of US tight oil and crude oil production on the downstream sector. He routinely supports executive and corporate boards with views on energy transition, refining/petrochemical interface/integration trends, and the oil and refining sectors. Mr. Barrow began his career as an engineer at Exxon. He holds a Bachelor of Science in mechanical engineering from Kansas State University and an MBA from the University of Houston, both in the United States.

Dr. Victor Shum, vice president of Energy Consulting at IHS Markit, leads advisory services in Oil Markets, Midstream and Downstream in Asia Pacific. Dr. Shum has over 30 years of commercial and management experience in the consulting and oil industries. He has extensive experience working with senior management teams on strategy, acquisitions and operational solutions. Based in Singapore since 1999, Dr. Shum has advised a wide variety of clients including national oil companies, international oil majors, independents, financial institutions and governments in Asia Pacific. Print and television media frequently interview him for his views on crude oil markets. Dr. Shum joined IHS in 2011 via the acquisition of Purvin & Gertz. Prior to IHS, he worked at Purvin & Gertz as a global consultant advising clients in Asia Pacific, the Middle East and Americas for about 15 years. He began his career with Amoco Oil in the U.S. Dr. Shum earned an MBA from the University of Chicago and a PhD in chemical engineering from Northwestern University.​

Mr. Grati leads the Refining and Marketing team for the Europe/CIS region, and prepares the quarterly long-term price forecasts for crude oil and refinined products relevant to the European market. He specializes in the refinery's heavy fractions and the marine bunker market. He has carried out numerous tailored consulting assignments for national and international oil companies, traders, logistics providers, and financial institutions. Each quarter, he also prepares the long-term price forecast for key European, CIS and African crude oil grades, as well as for refined products in Northwest Europe and the Mediterranean.Since joining IHS Markit in 2014, he has conducted various client assignments related to the supply, demand, and price impact of the upcoming 2020 bunker specification change. He also headed the supply and demand section of the IHS Markit Multiclient Study Navigating choppy waters, which focuses on the bunker fuel transition. In 2019, he was in charge of shipping policy for the latest Multiclient Study Reinventing the Airplane and the Ship, about the decarbonization of aviation and maritime transport.Before joining IHS Markit, Mr. Grati worked for ExxonMobil, most recently as heavy feedstocks and fuel oil optimizer for Europe, where he helped prepare the company for the 2015 bunker specification change in the emission control areas. He also held various technical, operational, economic, and supervisory roles at two of ExxonMobil's refineries. Mr. Grati holds a Master of Science in civil engineering from Ghent University, Belgium, and an Executive MBA from Antwerp Management School, Belgium.

In this role, he specializes in maritime-related topics, including as a contributor to the IHS Markit Multiclient Study, "Navigating Choppy Waters," which focuses on marine bunker fuel in a low-sulfur, low-carbon world. Before taking on his current role in 2018, Mr. Atkinson was a member of the Maritime and Trade research and analysis team at IHS Markit. He played a key role in a project for a Far East port operator, analyzing future ship size trends based on forecast trade and technical limitations of ships. He also led projects that reviewed and forecast the maritime market, examining onboard equipment and propulsion types; in addition, he maintained a dialogue on future marine compliance regulations and their effects on the maritime market. Previously, Mr. Atkinson was a manager in the Maritime and Trade Data team. During this time, he managed several teams in the United Kingdom, Malaysia, and Singapore, monitoring port developments and shipbuilding. Mr. Atkinson studied geography and photography at Truro College.