Environmental policies aiming to curb air pollutions have been the key driver behind China’s growing gas demand (see Figure 1). In particular, the year 2017 was a critical timeline for environmental target evaluation. In 2013, after a series of bad air pollution events across the country, the government issued the Action Plan on Prevention and Control of Air Pollution (the Action Plan), setting aggressive air pollution reduction targets for year-end 2017. In addition, 2014 followed with the Implementation Details on Performance Evaluation under Action Plan for Air Pollution Prevention, tying the achievement of the Action Plan’s targets to the performance evaluation of local government officials. 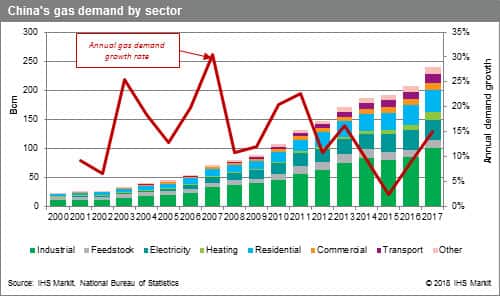 By early 2017, it was clear that the Beijing-Tianjin-Hebei (Jing-Jin-Ji) area still had a way to go to meet its targets. With just months remaining until year-end, the government pushed through an aggressive program to switch from disperse coal to natural gas in industrial and residential heating. The policy—the 2017 Air Pollution Prevention Work Plan for the Jing-Jin-Ji and Surrounding Regions, or better known as the 2+26 policy—carried out harsh coal-to-gas mandates in the two municipalities of Beijing and Tianjin and nearby 26 cities. Local government officials were at times personally present to witness coal boilers being taken apart and replaced by gas boilers, making sure that coal could no longer be burned. In addition, many cities in the region mandated heavily polluted industries to shut down or curtail production to reduce air pollution during the winter.

The effectiveness of the policy implementation in this case came as a surprise to many, the government included. By the end of 2017, many local coal-to-gas switch targets were exceeded. Surpassing targets is usually an achievement, but in this case, the lack of coordination between environmental regulators and the energy authorities to align gas supply and infrastructure connections led to the most serious gas supply crisis that China has ever seen. Industries had to shut down or curtail operations; vehicles running on natural gas faced long queues at the pump or even no gas at all; even the typically protected residential sector was literally left in the cold. Even with the gas supply shortage, gas demand surged 15%, adding over 30 Bcm in 2017.

In mid-December 2017, ten central government agencies jointly issued the Winter Clean Heating Plan for Northern Regions 2017–21 (the Clean Winter Heating Plan). This time, the plan took a longer time frame to implement and expanded to entire northern China where centralized district heating is available. Although the plan continued to focus on stopping the use of dispersed coal, it also clarified that the resulting heating gap should be filled not only by gas but also by other energy sources (see Figure 2). In particular, the most important source identified in the new plan was “clean coal” burned in large centralized coal-fired power or boiler facilities equipped with state-of-the-art pollution controls. Subsequently, China’s first quarter 2018 gas demand maintained double-digit growth at 15% year on year but was already down from the 19% increase during the last three quarters of 2017 when the 2+26 policy took effect.

In July 2018, China State Council issued the Three-Year Action Plan to Win the Battle for the Blue Sky, setting targets and guidelines to continue improving air quality in the next three years. Many of the items in the new policy confirmed previous policy directions, including key regions of focus, air quality targets, and fuel mix targets. In addition, the government reaffirmed the plan to use clean coal among clean fuels to replace dispersed coal and maintain heat supply security. Furthermore, the government lowered the prioritization of several gas-consuming sectors. Most notably, the policy planned to stop new construction of gas-based combined heat and power (CHP) projects, which was previously listed as a prioritized sector, potentially to better utilize existing coal CHP units.

These last two environmental policies indicated that although government will continue to support gas demand growth, more consideration is given on supply availability, midstream connection, and affordability. As a result, China’s gas demand growth in the next several years will likely moderate from the 2017 level. According to the IHS Markit outlook, China’s gas demand will grow at 8% per year on average through 2020 before slowing down to 5% per year during 2020–30 as the base gets larger. Nonetheless, the incremental demand is substantial: China will add roughly 100 Bcm every five years.

To support this demand, China will need to rely on all sources of gas supply. LNG imports in particular will be a significant and critical part of China’s gas market supply especially in the short term to meet peak winter demand before storage capacity reaches an adequate level. In the long term, LNG imports will remain an important and competitive source of supply to the coastal demand centers. Shale gas has a large potential given the size of the resources but is still at the early development stage and therefore represents the biggest supply-side uncertainty in China’s gas market outlook.