US Price Gouging in the Pharmaceutical Industry

Are prices really higher in the US?

US pharmaceutical sales are expected to grow 7.6% in 2018 and reach US$469.96 billion. While growth is being driven by a strong macro-economic recovery as well as market entry of new specialty drugs – free market pricing continues to be an influencing, and controversial, factor. Free market pricing has led to elevated list prices for drugs which are generally the highest among all developed countries. Based on our analysis of prices in regulated markets, the United States paid on average more than 50% that other developed markets. Price discrepancies range from being one-third of the price in France to being just under two-thirds of the price in Japan. Prices for cardiovascular, musculoskeletal, and nervous system drugs were among the cheapest in other developed countries, averaging about 80% lower than in the United States. This has prompted significant backlash from legislators and payors – although the truth about pricing in the United States is of course far more complicated than the numbers suggest at first glance.

What the US can learn from the UK: UK response to price gouging

A case study on strategic pricing 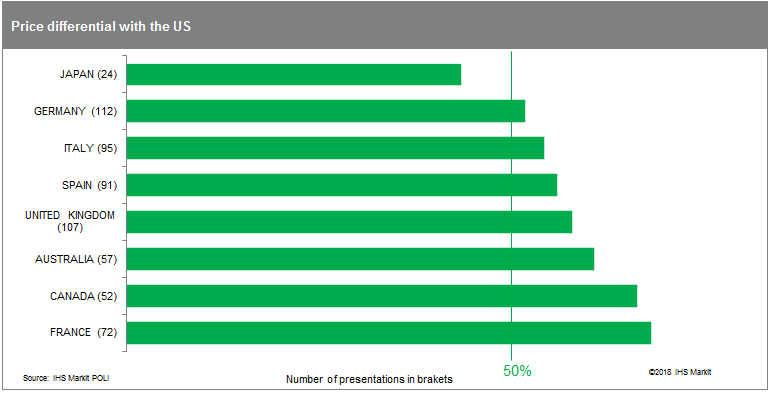 The call for transparency in pricing

The net price actually paid by insurers and purchasers is much lower than the list price after accounting for discounts and rebates – and since the United States is a multi-payor landscape, the actual net prices vary immensely. The undisclosed discounts remain highly confidential, and ultimately we have very little insight into the actual prices in the United States – whereas net prices in other countries are often much closer to the reference list prices. Hence, while US pharmaceutical reference prices are typically higher than most counterparts, it does not mean that the US also ultimately pays higher prices than other countries – a fine but important distinction. And certainly it means that the actual price distinctions between the US and other countries is nowhere near the average one sees at the reference price level.

Still, the US government has proposed several new initiatives, including a new “international pricing index”, in order to bring US prices closer to other countries - and while there are still significant potential obstacles to the implementation of this, multiple states have taken the bull by the horn and passed legislation that would provide significant oversight, transparency, and/or control of pharmaceutical prices.

States like California, Nevada, Maryland, and New York are implementing new legislation that seeks to provide transparency or indirect regulation of prescription drug prices. Congressional scrutiny over drug prices has created a highly volatile political climate, which has shown a strong spotlight on pharmaceutical pricing trends in the United States.

In October 2017, California signed into law SB 17, and it will probably pose the biggest threat to the industry as it requires, among other things, drug manufacturers to notify purchasers at least 60 days before increasing the list price of a prescription drug by more than 16% in a two-year period. All drugs with a Wholesale Acquisition Cost (WAC) of more than US$40.00 for a 30-day supply will be subject to the new legislation. Meanwhile, health plans and insurers must report on a number of factors and this data will then be compiled into a consumer-friendly report that highlights the overall effect of drug costs on healthcare premiums.

Maryland approved a new "price gouging" law (HB 631) targeted towards essential generic and off-patent products in May that would essentially serve to cap prices for certain products below a certain threshold. One of the requirements is that drug manufacturers with products that have realized a list price increase of greater than 50% during the course of one year to submit a statement to the Maryland Attorney General within 20 days explaining the reasons behind the rise. Although the law currently excludes patented products, the governor of the state, Larry Hogan, has stated that he would like to see more done for the state, particularly regarding this significant segment of the market that commonly includes the most expensive essential pharmaceutical drugs. Hogan has also added, "This issue is clearly one that can truly be addressed on a national, or even global level, given that the prescription-drug market cannot simply be changed by one state enacting legislation such as this." Despite its limitations, Maryland's law goes one step further than most transparency laws by including provisions that essentially cap price increases to below 50% annually, a strategy that would have been considered far too controversial to garner approval in the United States had the pharmaceutical pricing landscape not witnessed significant events during the past few years that have markedly affected public opinion of the industry.

Additional states, including Nevada and Vermont have also enacted drug-pricing legislation to date. The drug-transparency law passed last year in Vermont (S.216) requires drug manufacturers to justify price increases exceeding 50% over five years or 15% in a single year – if they place a substantial cost burden on the state – to the Attorney General's Office. They could face fines of up to US$10,000 if they fail to do so.

Millions of lives are saved by blood transfusions and this company plays a vital role in making transfusions safe. To provide hospitals with the best pre-transfusion diagnostic products, its researchers are identifying next-generation concepts and generating important innovations while also resolving problems and documenting their findings more efficiently.

China’s young biosimilars market is taking off, with a raft of approvals of domestically-developed biosimilars expe… https://t.co/9ONykEElmS

New originator biologics are being added to the reimbursement list in Poland, but they are simply not reaching a su… https://t.co/TLK722uAOe

RT @IHSMarkit: From all of us at @IHSMarkit, we’re wishing you a prosperous, healthy, and happy new year. Bring on 2020! #ihsmarkitlife h…

Association for the Advancement of Medical Instrumentation (AAMI) Standards