On 22 December 2017, President Trump signed into law the Tax Cuts and Jobs Act (TCJA or “the Act”), the most sweeping rewrite of the nation’s tax code since the Tax Reform Act of 1986. The tax plan slashes individual and business tax rates, while broadening the corresponding tax bases. Its cost, before macroeconomic feedback, is roughly $1.5 trillion over ten years, a limit set by the Congressional Budget Resolution for fiscal year (FY) 2018.

By 2021, the implementation of the tax plan will result in real GDP rising 0.6% above our previous baseline. Over this period, the unemployment rate will temporarily decline ¼ percentage point below the baseline, bringing modest additional upward pressure on inflation. Later, as the impetus from the tax cuts dissipates, as higher deficits and debt crowd out private investments and, as the personal provisions of the Act expire, GDP quickly slips back towards the baseline level. The modest boost to potential growth implies little dynamic revenue feedback. Hence, the TCJA is likely to lead to higher deficits and debt over the next ten years, exacerbating the nation’s fiscal imbalance. 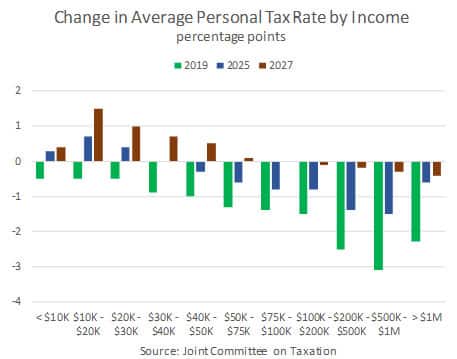 TCJA will shift the burden of taxation towards the lower end of the income distribution, especially after the individual provisions expire, exacerbating recent trends towards income inequality. It is also a large tax cut enacted with the economy near full employment, inflation rising towards the Federal Reserve’s 2% objective, and the Federal Open Market Committee (FOMC) already removing monetary accommodation. This raises the possibility of an unnecessary and ill-timed fiscal stimulus, the kind of “policy mistake” that has ended some previous expansions.

The impact of the tax plan on labor supply is minimal. The increase in potential GDP is attributable almost entirely to a 2% increase in capital services that itself results from an increase in nonresidential fixed investment that peaks in 2025, before starting to fade as the expensing of equipment is phased out.

Through 2021, TCJA raises annual GDP growth by between 0.1 and 0.3 percentage point. The impact is larger in 2019 than in 2018 because in 2019 the catch-up in consumer spending is re-enforced by the growing impact on business fixed investment, especially from the expensing provisions that gain importance as bonus depreciation is phased out of the baseline. After 2025, when most individual provision of TCJA sunset and expensing is phasing out, growth slows below the baseline by as much as 0.4 percentage point. 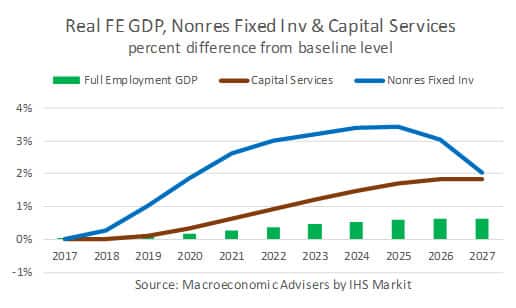 Initially, given modest upward pressure on the dollar, core inflation falls slightly below the baseline path. However, with the tightening of labor markets, inflation eventually moves above the baseline by about 0.1 percentage point, from 2021 through 2023, before that differential recedes.

Federal budget deficits are larger through 2027, with the biggest impact coming in 2019 before the effects fade. Under TCJA, we project the unified budget deficit to exceed $1 trillion in fiscal year 2020, the largest deficit since 2012. However, unlike the deficit in 2012, which, with unemployment still elevated following the Great Recession, had a large cyclical component, the deficit in 2020 will come with the economy arguably beyond full employment and so be entirely structural in nature. The current account deficit also widens as nearly 40% of the extra federal deficits through 2027 are financed with savings from the rest of the world. 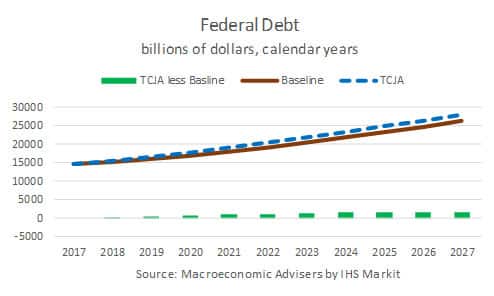 Vice President and co-head of US Economics, IHS Markit

RT @IHSMarkit: We continue our global commitment to human rights and are proud to join forces with @stonewalluk and other leading businesse…

A Primer on Currency Wars and Foreign Exchange Manipulation

US Construction and Infrastructure - State and Metro Area Trends & Forecasts