Is economic overheating a possibility in 2019?

Although world GDP growth is projected to decelerate in 2019, there are still pockets of the global economy that continue to expand at high, and potentially unsustainable, rates. A country that is thought to be overheating is in danger of a sharp correction that will include a substantial deceleration of growth, if not a recession. We examined the classic signs of overheating – accelerating inflation, rapid GDP growth, credit expansion, rising real interest rates and tightening labor markets and included the impact from capital inflows and short-term debt. Using eight potential warning signs, we compiled an overall index that provides an early warning system for countries that are at risk of overheating. Each country was ranked from top to bottom based on its vulnerability in each individual criterion, with the final, headline index being an average of the country’s ranking across the criteria. While this index does not necessarily suggest that a country faces an imminent threat of crashing, it does show that there are signs that economic growth may be exceeding potential and a correction might occur in the near future. 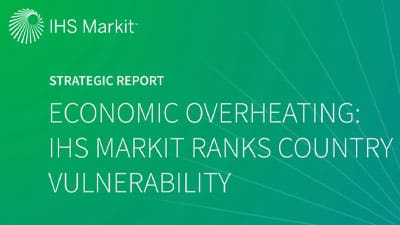 Is the African continent facing a debt crisis?

How safe is your investment in the region?
Request special report

We can help
Request a meeting 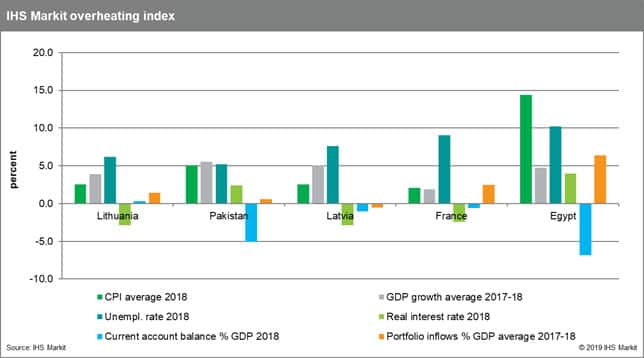 In the Baltics – in particular Lithuania, which tops our vulnerability index and Latvia – how the governments handle emigration and immigration is a key variable that will determine whether growth in these countries does indeed decelerate sharply. Due to heavy emigration, unemployment rates have fallen close to natural rates, which could begin to reduce employment; shrinking employment puts pressure on labor markets and could be a trigger for weaker growth in the medium term. While emigration will become less of a problem in the future as local wages begin to improve, an ageing population hurts future productivity and puts pressure on government finances. On the other hand, the Baltic countries are now much better equipped to weather the external shocks than they were before the global financial crisis. There are little signs of real estate bubbles or excess financial leverage, and current account and general government balances are in surplus or close to balance.

In Hungary, populist policies are fueling high growth, raising overheating risks. Growth is supported by an investment boom, while new export capacity has come online, alleviating fears of industrial slowdown in response to decelerated growth in the region. However, Hungary’s nationalistic tendencies could be a threat to sustained growth, as they could jeopardize key EU inflows that will support major infrastructure spending in the 2021–27 program period. Romania also scores highly in the overheating index and risks a slowdown. Populist economic policies – tax relief, generous income policy, and high spending on public employment – since the end of the global recession have fueled above-capacity growth that has contributed to a significant fiscal deficit. Recent fiscal changes and a deteriorating investment environment are undermining the country’s ability to weather external shocks, thus raising the potential for a rapid deceleration of economic growth.

While France rises high on our index with several monetary risks flagged, its latest very low core inflation data, modest employment growth results and outline of accommodative fiscal policy point to a controlled economic slowdown this year. French private debt currently stands at a high level compared to the beginning of the 2000s, a prominent factor of potential overheating risks in France. Sweden also appears on the list but does not seem to be at high risk of overheating: growth is slowing this year, but respectable domestic consumption growth continues to counterbalance the negative impact of weak exports on overall economic expansion. Growth in Austria has also already started to lose growth momentum, but no abrupt correction is likely. Instead, Austria seems to be less adversely affected by the deteriorating global demand than the eurozone on the average. Incomes and thus, further, household demand will enjoy support from the continued downward trend in unemployment.

A wave of reforms and strong inflows of foreign capital – a mixture of aid and new borrowing – drove up the risks associated with overheating in Egypt. However, growth remains far below its pre-crisis levels and will be primarily supply-side driven going forward, suggesting that the country will not be overheating. Nevertheless, there are risks associated with stability; the government must focus on funneling future capital into social benefits and education in order to prevent a possible backlash that may undermine stability. Tunisia has had a history of unsteady economic growth, and although growth is not particularly strong at present, expected growth of 3% in 2019 is nonetheless far stronger than the sub-2% growth noted in 2015-17. The currency remains fragile, providing another trigger for a potential surge of instability. A tight fiscal outlook, high inflation, and a fragile socioeconomic landscape raise downside risks. Off the coast, negative income taxes, higher minimum wages, and accommodative monetary policies helped push Mauritius into the top 15 most vulnerable economies. The country does not have strong export prospects, due to weak international competitiveness of its key export manufacturers. Instead, the country relies on public infrastructure development, tourism and consumption, putting it at risk of a sharp correction.

The combination of US Fed tightening, and external account pressures will lead to a tightening of monetary policies across the region, which raises the specter of a sharp slowdown of growth. The largest of these economies is the Philippines. The country’s central bank has already begun stepping in to try to mitigate some of the worst contributors to overheating concerns, attempting to curb excessive volatility in the currency and anchor inflationary expectations, having raised interest rates five times in 2018. Despite lingering overheating concerns, however, the central bank has switched to a more expansionary monetary stance, starting with a cut in policy rate in May. Monetary easing came with annual inflation decelerating back to 3% y/y in April – the mid-point of the target range – as well as a weaker-than-expected GDP growth in the first quarter. Similarly, Pakistan, with the second-highest risk rating in our survey, has already begun tightening monetary policy with a negative impact on economic growth. Along with monetary policy tightening, signs of fiscal constraint have recently increased as the new government has announced cuts to development spending in line with the recently agreed IMF bailout program, further contributing to the end of the overheating cycle. In Vietnam, booming growth is expected to continue, without a likely burst to overheating concerns. Crucially, the country’s trade balance remains in surplus, with inflows of foreign capital supportive of the further development of the country’s export potential, providing longer-term support for GDP growth. Of course, downside risks do exist – as they do for most of Asia – that a sharp weakening of Chinese growth could severely undermine growth in Vietnam. As in Vietnam, growth in Bangladesh is booming, although it is anticipated to continue, but moderate somewhat. Although some concerns of overheating are prevalent – consumption-heavy growth, high inflation, a deteriorating current-account balance – much of the growth being noted is related to strong gains in investment and fresh borrowing to improve the country’s infrastructure.

Finally, Canada is on this list but shows no real dangers of overheating. The highest rankings for the country are associated with short-term debt and credit growth. Credit growth was inflated by the country’s surging home prices, but the government has already adopted stricter mortgage rules that have slowed mortgage debt and consumer credit. Meanwhile, short-term debt is a factor of the country’s primary involvement in global capital markets and close association with the United States

He is responsible for providing economic and risk analyses for several emerging market countries -- Turkey, Croatia, Slovenia, Uzbekistan, Kyrgyzstan, Tajikistan, and Turkmenistan -- as well as modeling and forecasting macroeconomic conditions for these countries. He obtained his bachelor's degree in international and Russian-area studies at American University, Washington, D.C., and his master's degree in International Commerce and Policy at George Mason University, US. He studied in both Russia and Turkey as part of the curriculum.

Venla Sipilä-Rosen is the Europe and CIS economist with Economics & Country Risk team at IHS Markit. In addition, she is involved in managing the Sovereign Risk service. She joined the company in March 2004.Her prior working experience includes employment at the Research Institute of the Finnish Economy (ETLA) in Helsinki, Finland, and at the Department for Development Assistance of the Ministry of Foreign Affairs, Helsinki. She also has experience in teaching, having worked as a college professor in economics and as a teaching assistant in economics and statistics at the School of Slavonic and East European Studies (SSEES), University College London (UCL), as well as an examiner for the Russian and East European Studies Program at the Renvall Institute for Area and Cultural Studies, University of Helsinki. She earned a Doctoral degree in economics from SSEES, UCL and a Master's degree in social sciences (economics) from the University of Helsinki. She has studied in Vienna, Austria; Saarbrücken, Germany; and Moscow, Russia. She speaks Finnish, Swedish, German, and some Russian.

Higher input costs are being felt in chemicals once again while rubber prices continue to decline… https://t.co/vfxkZoXYp8

Higher input costs are being felt in chemicals once again while rubber prices continue to decline… https://t.co/oyXH1gNOFp

Greece's national recovery and resilience plan has the potential to be a game changer for the Greek economy. It's t… https://t.co/pkp6XiHExp

The 2020 Tokyo Olympic and Paralympic Games in Japan

US Economic Data and Press Releases - US Macroeconomic Indicator News