Recession coming to an end but slow growth ahead

After a deep and prolonged recession, Brazil is beginning to show signs of recovery. The March Purchasing Managers’ Index (PMI) figures, while still reflecting economic contraction, reached their highest since February 2015, while industrial production data also indicated a less severe recession. In addition, the monthly index of economic activity in January and February 2017 showed strong expansion. This trend is expected to continue through the first quarter and would end 11 consecutive quarterly declines. IHS Markit forecasts that Brazil’s economy will likely stabilize in 2017 and resume growth in 2018.

While PMI indicators have improved in recent months, Brazil’s government must still pass politically unpopular reforms to fix its huge fiscal gap: Gross fiscal debt amounts to 70% of GDP, which borders on unmanageable levels. On the positive side, lower inflation—due to reduced demand during the recession—will allow Brazil’s central bank to continue to cut the policy rate. Moreover, Brazil’s exchange rate remains relatively strong, supported by a sizeable trade surplus and capital inflows. Brazil already has a highly diversified industrial base, abundant natural resources and great domestic market potential; if it can balance its public finances, it would significantly increase its long-term appeal to foreign investors. 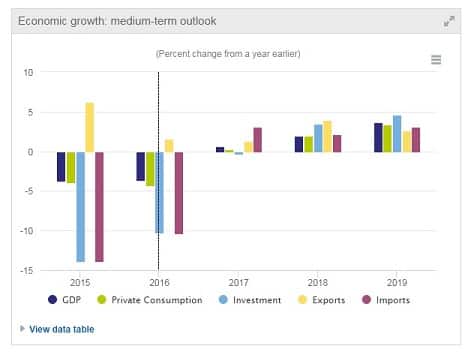 Following Dilma Rousseff’s impeachment, Michel Temer was officially sworn in as president on August 31. He is expected to serve until 2018, but fresh corruption allegations are threatening his stay in office. While Brazil’s economy is starting to show signs of recovery, it has been going through a deep and prolonged recession. GDP contracted by 3.6% in 2016 and unemployment surged to 11.3%; anemic growth of just 0.2% is forecast for 2017. Temer will prioritize maintaining political stability and tackling an unsustainable fiscal deficit that will require the approval of an unpopular austerity program by Congress. Fiscal retrenchment efforts will open the door for the privatization of airports and power distributors. Foreign investment is constrained by heavy taxation, outdated labor laws, corruption and an excessive state bureaucratic burden.

A note on our risk ratings: IHS Markit derives country risk ratings for 206 countries, based on six separate ratings in each country: political, economic, legal, tax, operational and security with 22 detailed sub-aggregate risks. These ratings allow you to quantify risk with greater specificity with a scoring system based on a 0.1-10 logarithmic scale. Seven risk bands, from low to extreme, allow you to compare and contrast risk between countries and regions.

Dr. Amiel is a director in the Economics and Country Risk Group for Global Insight at IHS Markit. He brings 20 years of international experience in macroeconomic and sovereign risk analysis of Latin America gained over a long career tracking economic developments and business cycles of the region with a focus on risks for medium- and long-term investment. He coordinates the group's analysis and forecasts and is responsible for reporting on Peru, Mexico, and Brazil. As a sovereign risk expert, he closely monitors and tracks repayment capacity of Latin American economies, assessing both short- and long-term risks. Prior to joining IHS Markit, he served as the country risk manager for Hamilton Bank. Previously, he was a research associate at the Latin American and Caribbean Center at Florida International University (FIU) in Miami, Florida, US.Dr. Amiel earned a Bachelor of Arts in Economics from Universidad de Lima in Peru. He completed his Master of Arts in Business and Economics at the State University of New York - Stony Brook, and went on to attain his doctoral degree in economics at FIU, where he served as an adjunct professor in the Department of Economics.

Mr. Caicedo analyses and forecasts political and violent risks in Latin America. Bringing more than 20 years of experience, Mr. Caicedo shares his expertise in policymaking and its impact on energy and infrastructure in Brazil, the regulatory outlook for Argentina, as well as fiscal and monetary policy across the region. He also covers resource nationalism and the implications in the region for the oil and mining industries. He is an expert in both the Colombia internal conflict and the terrorism threat posed by Mexico's drug cartels. He is regularly interviewed by the media, including CNN, CNBC, Sky News and Bloomberg, among others. Fluent in Spanish, Portuguese and English, he has recently presented to conferences about political risk in Argentina and throughout Latin America and the risks to cargo in Brazil and Argentina. Recent speaking engagements were: the ISMA's conference in Bogota on Drug cartels and crime trends in Latin America and the Reactions North America Insurance conference in New York. Mr. Caicedo's university degrees include a Bachelor of Arts in Philosophy and History from the Saint Thomas Aquinas University, Bogota, Colombia, Master of Arts in Latin America Area Studies from University College London (UCL), UK, and a Post-graduate Certificate in Economics from Birkbeck College, University of London, UK.