Zimbabwean president and leader of the ruling Zimbabwe African National Union-Patriotic Front (ZANU-PF) on 7 September 2018 announced a new cabinet following his victory in the 31 July 2018 elections, the first since the resignation of long-serving president Robert Mugabe in November 2017.

Those taking up important portfolios in the 20-member Zimbabwean Cabinet (reduced from 33) include Mthuli Ncube, an Oxford University professor and the former vice-president of the African Development Bank (AfDB), who took over Patrick Chinamasa's finance and economic planning portfolio. Chinamasa lost his parliamentary seat despite his role in negotiating with the International Monetary Fund (IMF) and other multilateral creditors to resolve Zimbabwe's USD1.8-billion debt arrears.

Others taking up important portfolios include Major General Sibusiso Moyo, who is retained as Foreign Affairs and International Trade Minister; Air Chief Marshal Perence Shiri, who is also retained as Lands, Agriculture, Water, Climate, and Rural Resettlement Minister; and Winston Chitando, a mining industry veteran and former vice-president of the Zimbabwean Chamber of Mines, as Mining Minister. Although President Emmerson Mnangagwa's cabinet is made up of his key allies, it has been composed with an eye to dealing with the increasing divide within the ruling Zimbabwe African National Union-Patriotic Front (ZANU-PF) about the centrality of the military in the administration. Media reports since March, and particularly in the aftermath of the July elections, indicate a growing rift between the military and the civilian section of ZANU-PF, with the latter criticizing the Zimbabwe Defense Forces (ZDF) for dominating the government and usurping control of the party; these criticisms have been led by members of the War Veterans' Association, headed by former information minister Chris Mutsvangwa. Mnangagwa's placation of the security establishment that brought him to power with appointments and the removal of several Mugabe-era party stalwarts such as Chinamasa, as well as former home affairs and culture minister Obert Mpofu, to newly created positions within ZANU-PF's politburo will probably secure his position as president and give him the space and capacity to implement reforms. 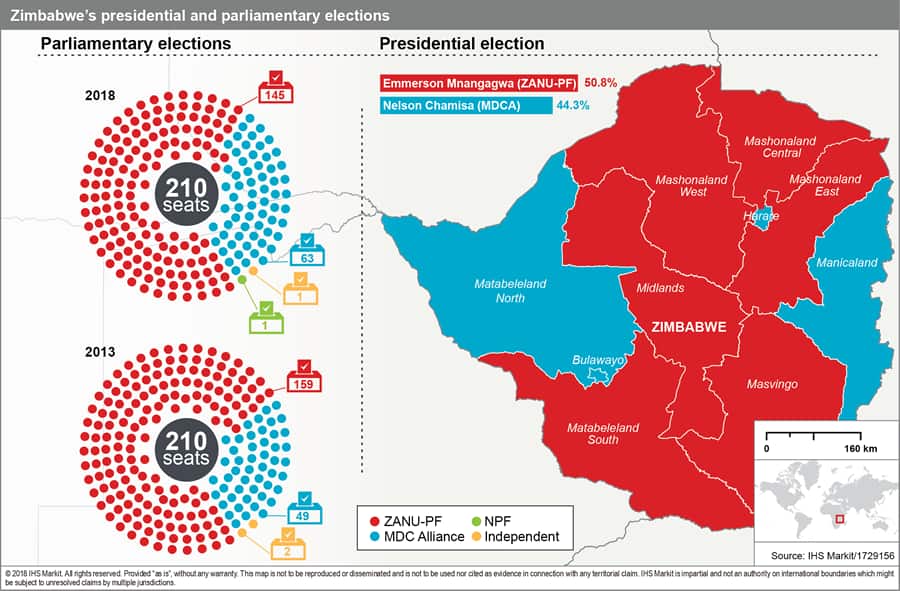 Zimbabwe is "Open for Business" and the road to economic recovery

Following Mnangagwa's ascension to power in the November 2017 military-assisted takeover, he immediately set about a process of economic reforms, sending positive signals to the international investor community under the "Zimbabwe is Open for Business" policy. Chinamasa, then the finance minister, presented the first budget of the Mnangagwa administration in December 2017 for the 2018 fiscal year and introduced major legislative and policy reforms designed to revive the ailing economy, including amending the Mugabe-era Indigenization and Empowerment Act. The amendment removed the minimum requirement of 51% local ownership in all businesses, except for those extractive firms mining diamonds and platinum. Chinamasa also announced compensation for farmers whose lands were seized during the land reform of the early 2000s. The administration has also been able to recover USD591.0 million out of an estimated USD1.3 billion of illegally externalized funds following the expiration of a 90-day amnesty at the end of February 2018, according to media reports.

Despite these initial successes, Mnangagwa and ZANU-PF's major priorities will probably include tackling corruption, promoting foreign direct investment (FDI), especially in mining and infrastructure, increasing value-added manufacturing and agro-processing, and enacting pro-business reforms under a new investment law. It also includes removing employment quotas while re-engaging with the international community to unlock new financing to ease Zimbabwe's liquidity crisis. In the key mining sector, the ZANU-PF administration is seeking to increase output and revenue from diamonds and platinum exports and other gemstones; to give effect to this, the government on June 1 dropped a proposal until then contained in the Mines and Minerals Amendment Bill requiring mining companies to list most of their shares on the Zimbabwe Stock Exchange.

Further emphasis will probably be placed on cutting government spending; this is likely to include the announcement of a recruitment freeze by the government, introducing plans to force staff in the public service who are aged above 65 to retire, the reduction of international delegations, and the closing down of embassies to reduce the exorbitant public-sector wage bill that consumes more than 90% of government expenditure. In addition, the government will probably continue its rapprochement efforts with international financial institutions, including the IMF and the AfDB, in meeting numerous milestones, particularly to secure new funding while agreeing to a new austerity and structural reform program including compensation for past land expropriations.

The appointment of Ncube to the finance portfolio appears to reinforce the "Zimbabwe is Open for Business" message that Mnangagwa intends to get the Zimbabwean economy back on track. Ncube has already indicated that currency reform is at the top of his turn-around strategy for the economy and is looking at adopting the US dollar as the only currency, while removing the controversial bond notes from circulation. He has also committed himself to assisting Zimbabwe's financial sector to introduce new and innovative products. In addition, the Cabinet appointments most probably affirm Mnangagwa's commitment to structural and economic reforms, including tackling corruption and enacting pro-business reforms under a new investment law.

While the economic transformation agenda takes center stage, the opposition Movement for Democratic Change (MDC) Alliance is highly likely to continue challenging the legitimacy of the 31 July elections and Mnangagwa's presidency in the media, although further protests like those witnessed in the aftermath of the announcement of the presidential electoral result on 4 August, which resulted in seven deaths, are highly unlikely to reoccur. Mnangagwa will probably continue to attempt to entice MDC leader Nelson Chamisa into endorsing his presidency. However, concerns over political stability will probably remain over the one-year outlook, given that some of the changes Mnangagwa is implementing, especially in the fight against corruption, will threaten certain entrenched interests within the military establishment and within ZANU-PF. Indicators pointing to improving political and economic prospects would include successful prosecutions of people involved in the post-election violence following the publication of the report of the independent Dixon Commission of Inquiry, announcement of new debt talks, and removal of ZANU-PF officials from EU-US sanctions list.