Zapad-2017 is a joint strategic exercise by the Russian and Belarusian armed forces, planned for 14-20 September 2017. It will take place in Belarus and parts of the Western Military District of Russia, including Leningrad, Pskov, Novgorod and Smolensk regions, as well as in Kaliningrad region, the Russian exclave on the southeastern shore of the Baltic Sea between Poland and Lithuania.

According to Russian official statements, the exercise will involve a total of 12,700 Russian and Belarusian military personnel, 370 armoured vehicles (including 200 tanks), 250 artillery units, and over 70 aircraft. The number of troops is below the threshold of 13,000 which under OSCE rules would require mandatory formal notification and invitation of observers. According to the Baltic States, the last Zapad-series exercise in 2013 involved 75,000 military personnel, six times higher than Russia disclosed. IHS Markit has no evidence to support these claims, but it is quite likely that Russia has under-reported the numbers of Russian troops participating in order to avoid closer international scrutiny. 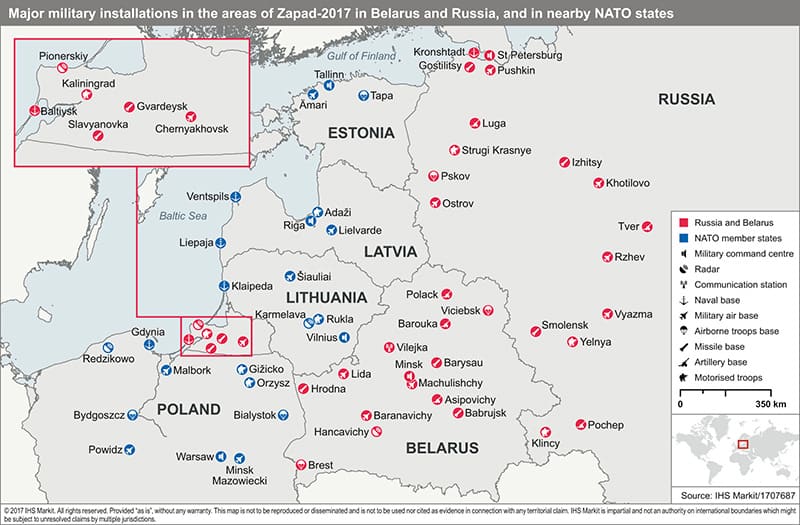 We assesses that Russia's key objective in Zapad-2017 is to demonstrate its upgraded military capabilities to its Western neighbours, in order to discourage what would be regarded as any hostile moves against Moscow, or its ally Belarus. The exercise will likely be used to demonstrate the modernisation of Russian armed forces in the past decade, and demonstrate their capability to counter a range of military threats to its ally Belarus, whether of conventional attack or asymmetric fostering of separatism. If Russian forces deployed to take part in Zapad-2017 are larger than the officially declared number, this would serve as an indicator of such demonstration.

Moscow is also likely to use the exercise to pressure Belarus into a closer political and military alliance, pushing for establishment of its new military bases on Belarusian territory. But Russia is more likely to use trade disputes rather than military threats to achieve this goal. It is probably not coincidental that in late August Russia accused Belarus of breaking trade rules by re-exporting embargoed EU foods into the Russian market. Further trade disputes would serve as indicators to watch. Additionally, the withdrawal (or lack thereof) of Russian troops from Belarus upon the completion of the exercise would serve as another important indicator of reducing or increasing risk.

However, outright Russian occupation of Belarus, or any significant border incidents on the borders with NATO member states or Ukraine, are unlikely. First, this time Russia has not been conducting the kinds of information operations and propaganda that prepared the ground for military operations into both Georgia and Ukraine, ostensibly in response to requests for intervention. Second, Russia is aware that any permanent incursions into Ukraine would be likely to trigger new Western sanctions and would probably further mobilise Ukraine into a unified polity opposed to increased Russian influence - both results would be counterproductive to Russian strategy. Third, in the Baltic States and Poland in the past two years there has been a significant improvement in defence capabilities, including NATO's deployment of small, but politically significant, multinational deterrent forces, fully operational since August 2017. Moscow is aware that any military conflict in the Baltics would risk quickly escalating to an interstate war with NATO, which Russia would be unlikely to risk. On 6 September NATO Secretary General Jens Stoltenberg, while visiting Estonia, said that Zapad-2017 exercise does not pose a direct threat to any of NATO member states.

At the same time, Russia is likely to use what has become its routine tactic of small-scale intimidation, especially in airspace bordering the Baltic States, Poland and Ukraine. Incidents of Russian military aircraft flying close to or into the airspace of its neighbours, particularly the Baltic States, and buzzing NATO aircraft over the international waters of the Baltic Sea, will be likely. They are likely to be contained and have no more than a temporary impact on civilian aircraft and commercial shipping operations.