Zambian finance ministry officials announced on 7 January 2019 that the government will begin implementation of the increased mineral royalty tax regime that was initially announced in the 2019 budget.

Zambia's royalty increases were first announced by Finance Minister Margaret Mwanakatwe in her maiden October 2018 budget statement. Depending on the price of copper, mineral royalties will now range from 5.5% to 10% versus 4% to 6% previously. Additionally, importation of copper-cobalt concentrates, primarily from neighbouring Democratic Republic of Congo (DRC) for refining and smelting in Zambia, will attract a 5% import duty while a 15% export duty will be introduced for precious metals such as gold and other gemstones. The 30% corporate income tax (CIT) will remain but mineral royalty tax will no longer be deductible for CIT purposes. Allowances for computing taxable profits will be capped at 30% of company earnings before interest, tax, depreciation, and amortisation (EBITDA) to prevent base erosion and profit shifting (BEPS).

Zambia has revised its Mineral Royalty Tax regime several times since 2014 in response to the global commodity price slump; mining accounts for 70% of Zambia's exports and 12% of GDP. The latest increase reflects the country's mounting external debt and curtailment of aid. The move follows accusations by the main opposition United Party for National Development (UPND) and some ruling Patriotic Front (PF) members of poor economic management, widespread government corruption, and hidden borrowings. Discussions on a potential International Monetary Fund (IMF) programme have stalled since February 2018 given uncertainties about the size of Zambia's external liabilities and government unwillingness to commit to IMF-specified targets. The dismissal in September 2018 of former community development minister Emerine Kabanshi over a USD4.7-million social cash-transfer corruption scandal triggered the withdrawal of funding by donors including the UK government. 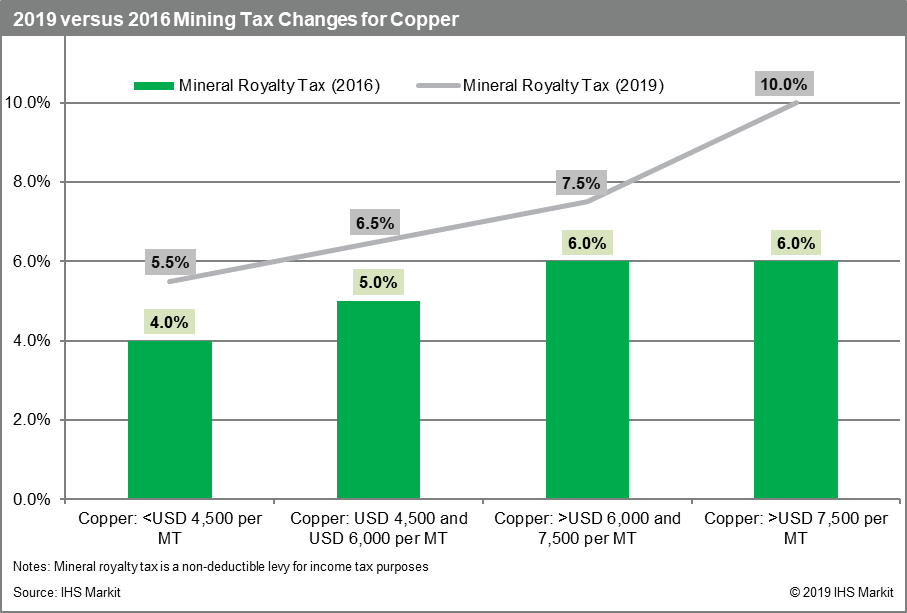 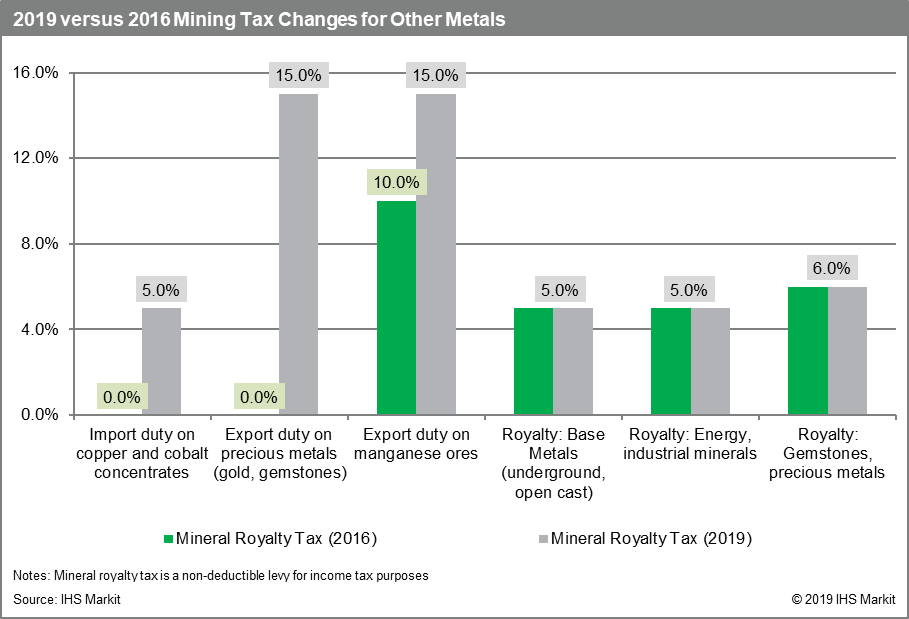 Other tax changes and audit uncertainty

Zambia's government also plans to abolish its value-added tax (VAT) scheme and to replace it with a direct non-refundable sales tax along with other tax amendments. These include an increase in withholding tax (WHT) from 15% to 20% for dividends, interest, and the remittance of branch profits. In addition, the statute of limitations to retain records for transfer pricing has been changed from six to 10 years while increasing the penalty for non-compliance by 8,000%. Following the introduction of an import duty on copper concentrates, media reported on 6 January that the Vedanta-operated Konkola Copper Mines (KCM) has indicated that it will suspend operations at its Nchanga mine.

Additionally, an estimated USD500 million of VAT refunds and transfer pricing issues add to fiscal uncertainties and are likely to hinder investment in the sector. In May 2018, the Zambia Revenue Authority (ZRA) concluded a customs audit of all Zambian mining firms and indicated that an office would be established specifically to focus on VAT refund verifications to improve the refund process. However, on 4 January 2019 the authority reversed this stance, claiming that mining companies instead owe VAT to the government, while suggesting that these tax issues were unlikely to be resolved in the one-year outlook due to their complexity. 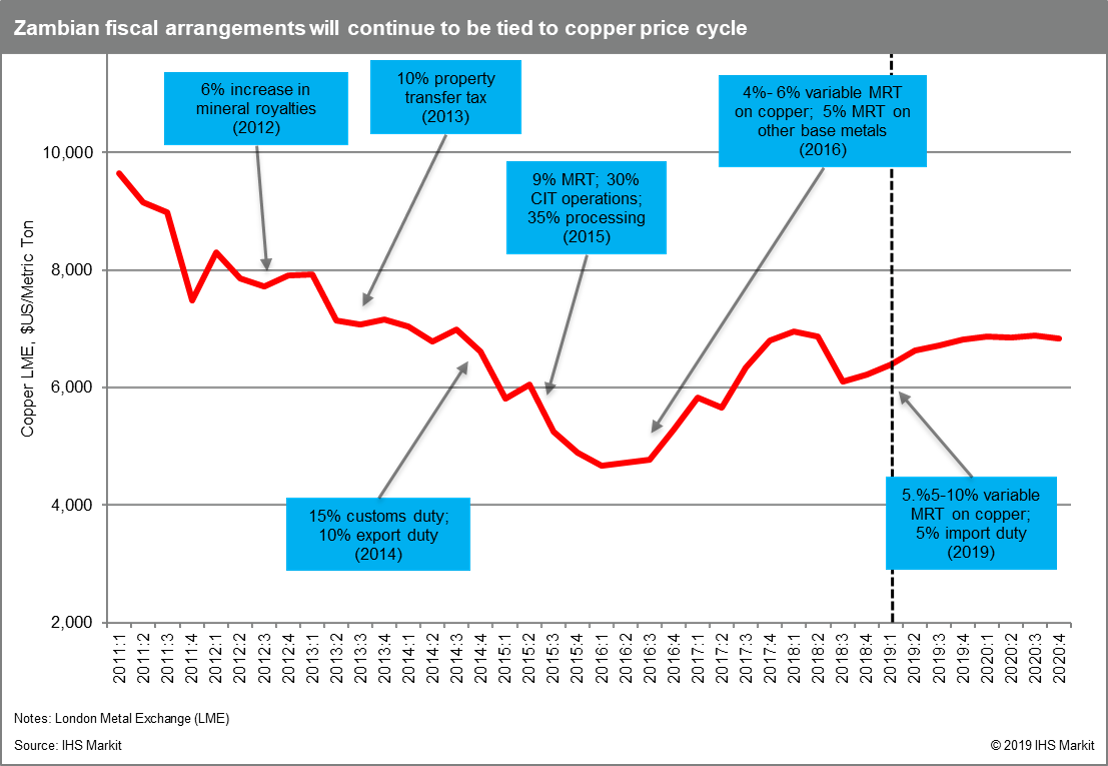 Since becoming finance minister in the February 2018 cabinet reshuffle, Mwanakatwe has attempted to re-establish investor confidence in Zambia by announcing a debt audit, halting new borrowing, and cancelling an estimated USD5 billion of contracted loans while holding high-level talks with the IMF in efforts to unblock the stalled bailout negotiations. However, the 2019 tax proposals, which are the most comprehensive tax changes in Zambia in the past decade, indicate that the PF government's economic policy is aggressively targeting foreign mining operators. Additionally, the government is highly likely to use its audits to seek increased tax compliance and to enforce stricter local content, pushing for more domestic primary commodity processing by the mining industry. Local content enforcement is also likely to target both multinationals and small- to medium-sized enterprises (SMEs) operating in the agriculture, manufacturing, construction, and utilities sectors with threats of licence revocations for multinational companies that fail to comply.

Fiscal changes are also generating increased protest risks, in particular encouraging protest marches by small-business owners over increasing tax compliance enforcement - notably the ZRA's introduction of a sales tax - and by mine workers over job losses in the sector. The protests, involving thousands of people, are likely to grow in intensity. Industrial action is most likely to be staged in Lusaka, Ndola, Kabwe, Mufulira, and Solwezi. Several strikes and protests, including those in the mining sector, have turned violent; when this occurs, security forces are highly likely to use rubber bullets, tear gas, and water cannon to repel protesters. Vandalism and street fighting with security forces is likely, as are roadblocks, increasing the risk of temporary disruption and denial of access to nearby mines and commercial property and lasting up to six hours.

Further weakness in commodity prices would be an adverse indicator for the risk of additional tax increases affecting the telecoms, manufacturing, construction, and utilities sectors. More positive indicators relating to fiscal risks would include the resumption of bilateral aid and successful prosecutions of public officials for alleged fraud and corruption.