Amidst the uncertainties surrounding the oil price downturn and global production rollback due to the COVID-19 pandemic, the Mexican ministry of energy, SENER, in collaboration with the National Hydrocarbons Commission (CNH), is urging the Mexican national oil company, PEMEX, and Talos Energy to reach a unitization agreement for the operatorship of one the world's largest shallow water in the past 20 years, the Zama field.

The Zama oil discovery is located in the shallow waters of Block 7, in Mexico's Sureste Basin. During the CNH Bid Round 1.1 for shallow water in 2014, the consortium formed by Talos Energy, Sierra O&G (now owned by Wintershall DEA) and Premier Oil, was awarded Contract Area Block 7 with a term of 30 years, starting in September 2015, and 2 possible extension periods of 5 years each. The discovery was announced in July 2017. The field is estimated to hold approximately 810 MMboe (million barrels of oil equivalent) of recoverable resources (2P volumes) which also positions it as the first and biggest discovery made by an IOC in Mexico. 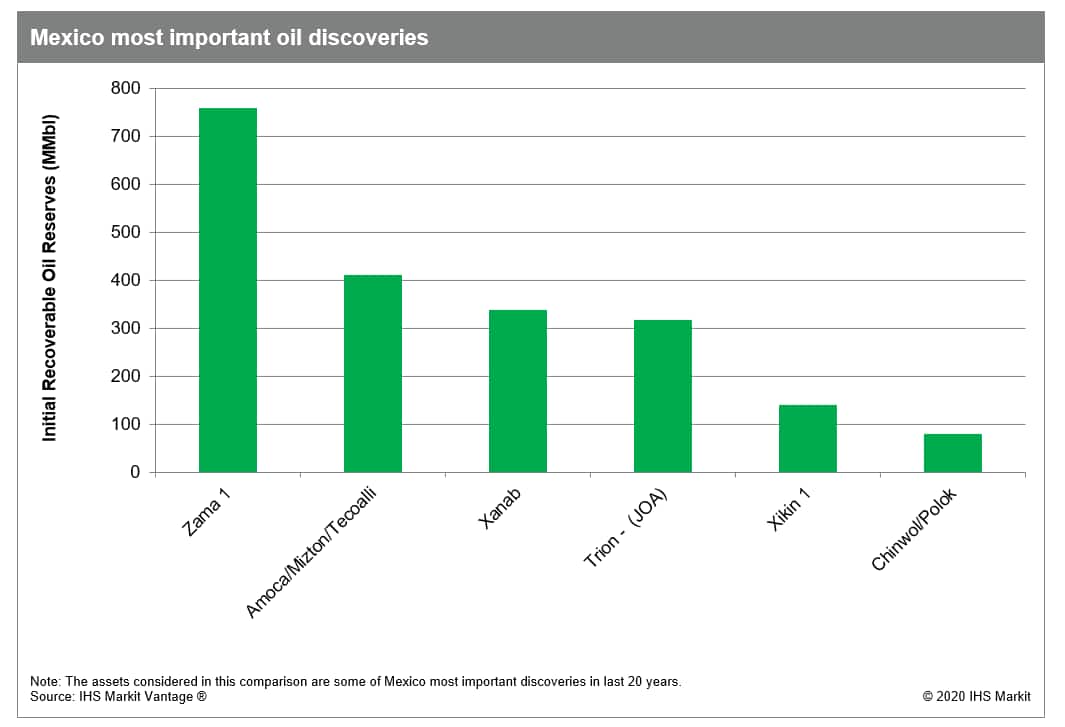 On October 5, 2017, Talos Energy notified CNH about the possibility of a shared reservoir with PEMEX entitlement block AE-0152 "Uchukil", which is located on the west side to Area Block 7. To date, there are no significant exploration or appraisal activities on this block, and only one exploratory well, Asab-1EXP, has been planned for 2020, according to CNH approved exploration plan, on December 3, 2019.

Zama sets a precedent in Mexico's oil and gas industry due to the unitization process which is needed for the shared reservoir. In March 15, 2018, SENER published the "Lineamientos que establecen el procedimiento para instruir la unificación de yacimientos compartidos y aprobar los términos y condiciones del acuerdo de unificación" which seeks to lay down the guidelines to establish the procedure to carry out the unitization of shared reservoirs and forms the basis to reach an agreement on the consequent activities to name an operator for the shared reservoir. Following this, Talos and PEMEX signed a Pre-Unitization Agreement on September 18, 2018, with a term of 2 years, which allows both parts to share information about the discovery and establish the process to reach the final agreement. In January 2020, following an independent technical study commissioned by the consortium, Talos stated that 60% of total field reserves lies in the block operated by Talos, while Pemex holds 40%.

On May 7, 2020, CNH confirmed the hydraulic connectivity between Area Block 7 and the entitlement block AE-0152 "Uchukil", which further established the existence of a shared reservoir. Based on this information, on July 7, 2020, SENER encouraged PEMEX and Talos Energy to reach a unitization agreement for the shared reservoir within 120 days. In such a case, if an agreement is not reached between the parties, a decision will be taken by SENER with the help of an independent expert while keeping in mind the best interests of Mexico.

Due to the need to first determine Zama's operator, there is currently no published development plan for the field. Hence, for the analysis presented here, the assumptions about the development concept for the Zama field were made taking into account the preliminary plans released by Talos Energy, the total recoverable resources, average well productivity, proximity to facilities and the quality of the oil. 22 production wells were considered along with the utilization of three PDUQ (Production Drilling Utilities and Quarters) platform, each one with oil and gas pipelines connected to a subsea tie-in assembly, with oil exported to an FSO (Floating Storage and Offloading Vessel), and gas exported to Dos Bocas Port in Tabasco, Mexico. A field life of 29 years was modeled by starting in 2024, reaching, after 3 years of production, peak production of 167,000 bbl/d (barrels of oil per day) for 3 years. 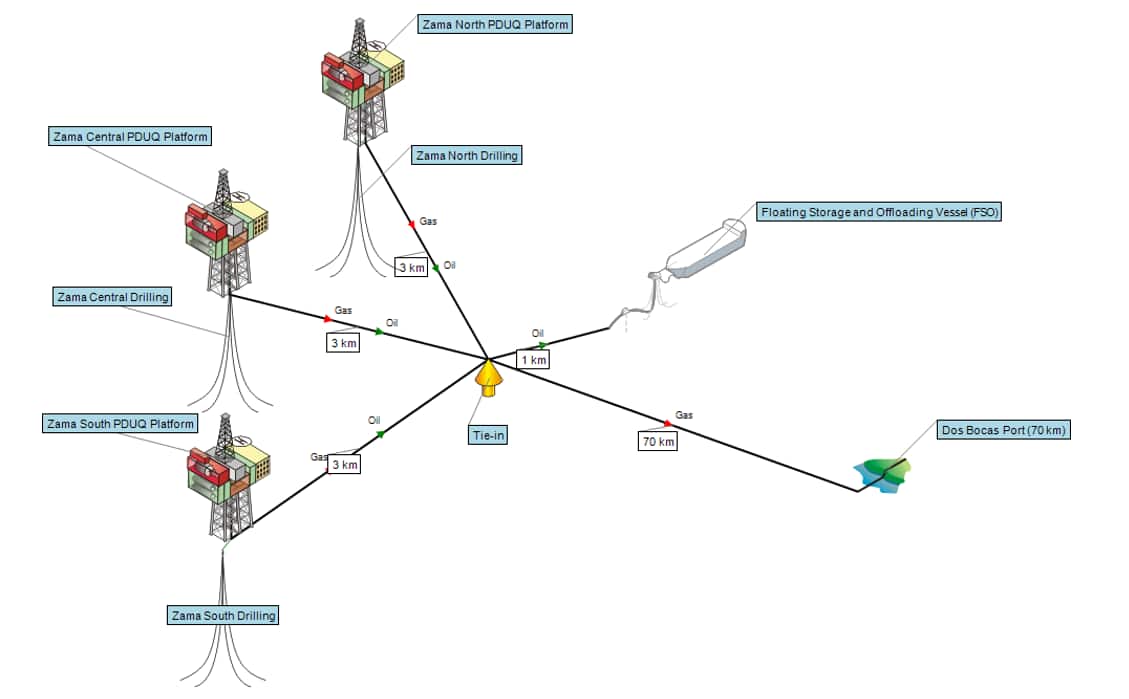 Under these considerations, the key economic indicators for this project are presented in Figure 3. According to our analysis, made with IHS Markit Vantage®, and which lies in agreement with the consortium expectations, the point forward break-even oil price for Zama is expected to be lower than $20/bbl, which lies below the break-even oil price of most projects in Mexico, which is above $30/bbl.

To evaluate the profitability of Zama field, sensitivity analyses obtained from IHS Markit Vantage®, and based on varying capital expenditure and operating costs are presented in Figure 4 and Figure 5, respectively. We have considered variations on construction labor times, such as the time of installation of infrastructure, following by an increase in personnel costs, such as the number of crew members on each production platform, amongst other things. 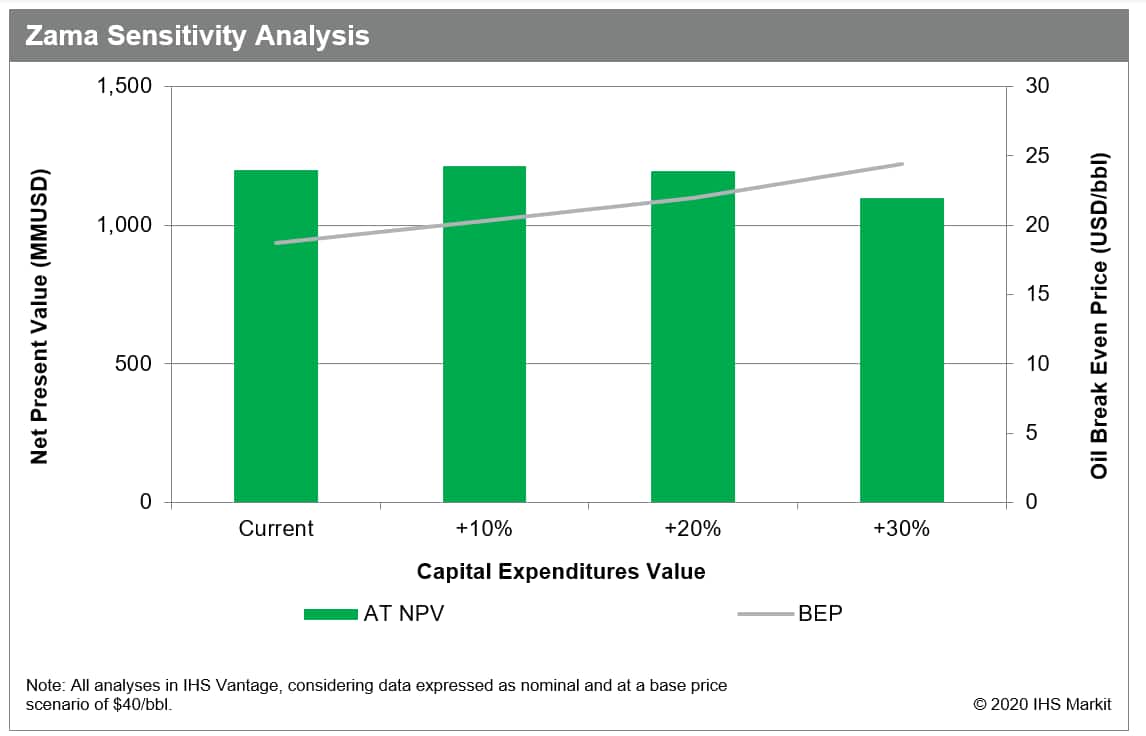 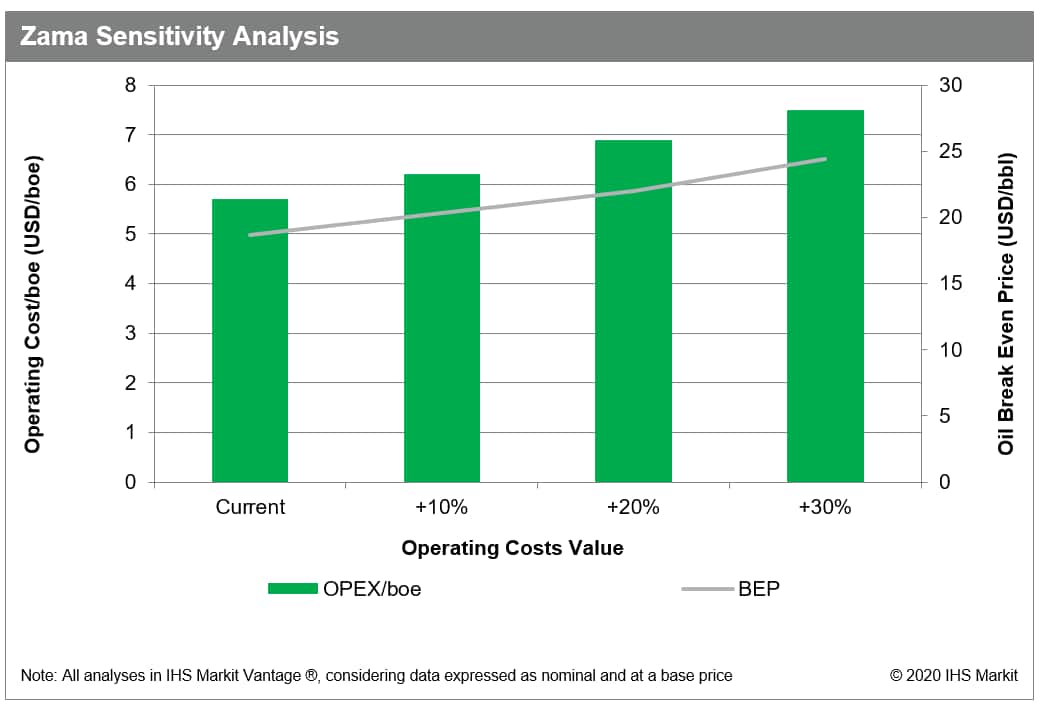 A delay in the development of the Zama asset has an adverse impact on the NPV of the asset. A delay on production date from 2024 to 2027 leads to a loss of more than US$200 million for the partners involved in the field, as shown in Figure 6. 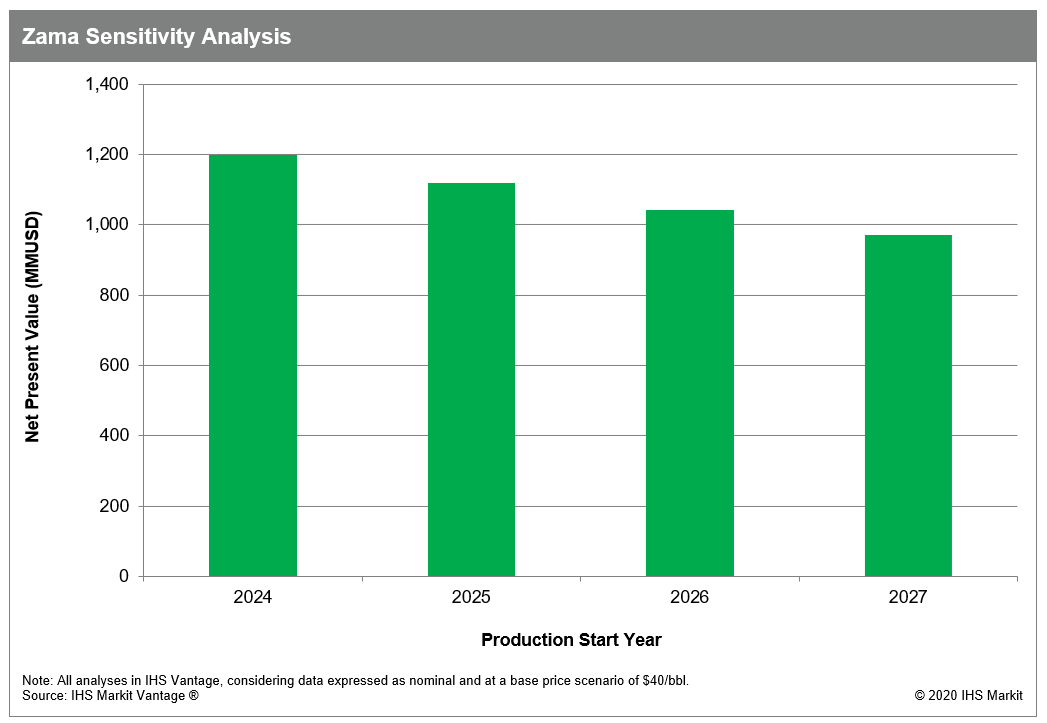 The relevance of this field lies not only in the size of its reserves and in the profitability presented under different scenarios, but also in the precedent that it sets for the Mexican oil and gas industry. This would be the first unitization process implemented in Mexico. Success in the development of the field would send a positive message to the oil and gas and the investment community. The Zama asset has a strong positive contribution to the overall portfolio of all the partners involved and any delays will, as seen in our analysis, have material adverse impact on the total returns that can be achieved from this world class resource. Other important outcome of the proven commerciality of this field, is that it opens a new exploratory perspective for the Tertiary Play in the shallow region of the Sureste Basin.

Learn more about our upstream oil and gas valuation solution.