xVA Loss and Capital Buffers during the COVID-19 market turmoil

The voluntary shutdown of large parts of the world economy to contain the spread of COVID-19 has clearly caused volatility in the financial markets. Stock indices have pulled back 20-30%, credit spreads have widened by roughly 3-7 times depending on the industry, and the VIX volatility indicator has hit levels not seen since the credit crisis of 2008-2009.

During the 2008-2009 credit crisis, a larger proportion of the losses experienced by banks was due to Credit Valuation Adjustment (CVA). CVA is the market price of counterparty default. The fair value of a derivatives portfolio must be adjusted by the CVA to reflect the fact that the counterparty may default prior to paying out all future cash flows of the derivative. As credit spreads on counterparties widen, the CVA increases and the value of the bank's derivatives portfolio decreases. But the CVA also depends on market risk factors such as interest rates, as those affect the future value of the derivatives. Central banks cutting interest rates can therefore be expected to affect banks' CVA.

The CVA losses during the last credit crisis led to major changes in how banks value and manage their derivatives portfolio. Firstly, it became much more common for banks of all sizes to monitor and hedge their CVA volatility, and subsequently factor the CVA into the price of the deal at inception. Secondly, regulators imposed additional capital requirements designed to cover the potential loss from CVA volatility; this became known as Basel III. With CVA now factoring into the price of the deals, the industry started looking at other costs of derivatives trading and has migrated towards factoring these into the inception price as well. The price of hedging unsecured exposure is covered by the Funding Valuation Adjustment (FVA), the cost of funding collateral is the Collateral Valuation Adjustment (CollVA) and the cost of ensuring the bank is capitalized against the trade is the Capital Valuation Adjustment (KVA). Together these are referred to as the valuation adjustments (xVAs) for the derivatives portfolio.

As we find ourselves in the midst of significant market turmoil, it is interesting to evaluate how these changes to the pricing and management of derivatives exposures are impacting banks' derivatives portfolios. The following plot shows how CVA on a 10yr, $10,000 notional, receiver IRS has increased between Feb 2 and April 2, 2020, when traded with various counterparties. 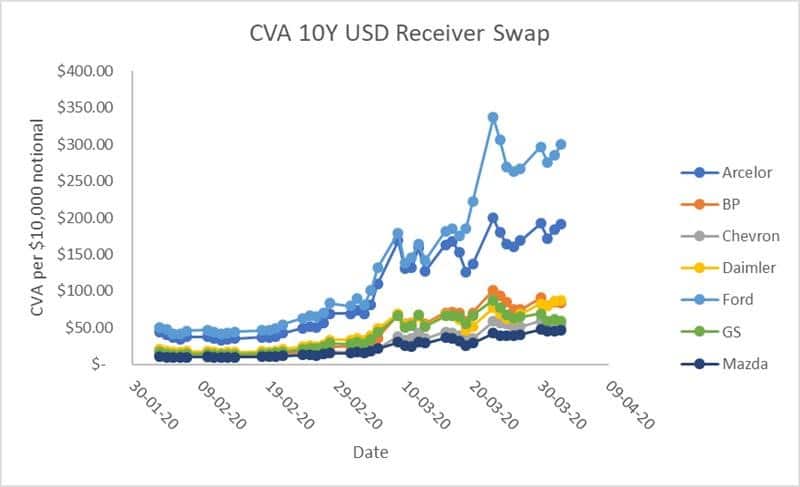 The profit and loss attribution for the CVA is shown in the table below. For Ford, roughly 60% of the increase is coming from credit spread widening, while roughly 38% is coming from the decrease in interest rates. Similar percentages are seen across other counterparties. While stock market volatility is elevated, swaptions volatilities for longer maturities have been flat to slightly down. For this reason, we are attributing a decrease in CVA due to volatilities. With large simultaneous moves in both credit and interest rates, one would expect significant credit-IR cross-gamma. The attribution analysis illustrates the cross-gamma component. It is often more expensive and challenging to hedge the cross-gamma. While some of the other losses reported in the table may have been hedged out by the xVA desk, the cross-gamma loss may be currently on the books.

Banks' FVA costs are also being impacted by the market turmoil. The FVA will be impacted by the decrease in interest rates, but also by the banks' costs of funding. As credit spreads widen, the cost for the bank to borrow in the market increases as counterparties see the bank as riskier. The figure below illustrates how a bank's FVA has widened over the past two months. The counterparty is BP, and the bank's funding rate is computed as the FedFunds rate + JPM credit spread. 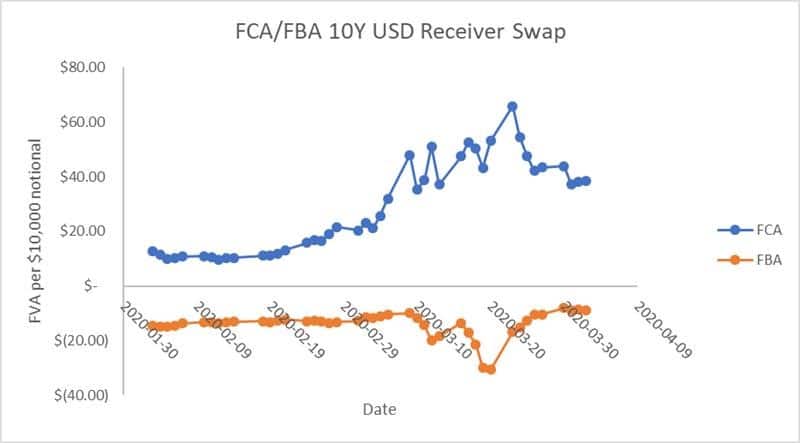 While xVA costs are increasing, the capital requirement of the banks is designed to be higher to help the banks weather such turmoil. Consider the same USD 10yr swap. The following figure illustrates how the exposure at default (EAD) has varied over the past two months. While it has increased due to the dropping interest rates, what is particularly interesting is the relative capital held during this crisis as compared to the credit crisis of 2008-9. 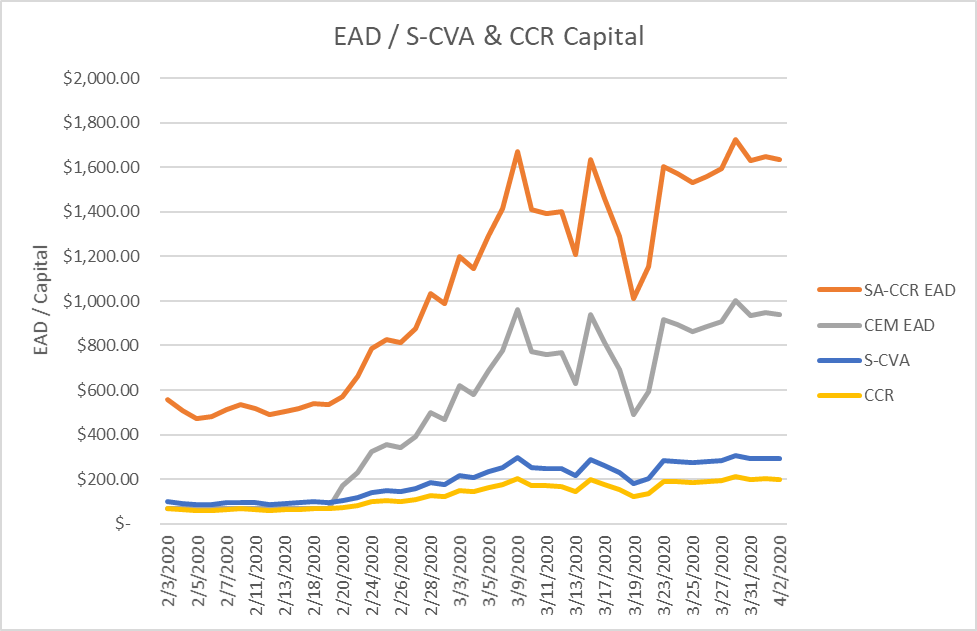 In 2008, the counterparty credit risk (CCR) capital for the bank was computed with the Current Exposure Method (CEM) add-on approach. At end of February 2020, the CCR exposure at default (EAD) would have been $500. However, in 2020 most banks are now using the so-called SA-CCR method to compute the EAD. This approach is more risk sensitive and captures netting and collateral more accurately than the CEM method. But to an uncollateralized counterparty, the capital is higher. Under SA-CCR the EAD will be roughly $1033. Thus, to risky uncollateralized counterparties, a bank holds greater than 2x the CCR capital now than it did in 2008. Assuming a PD of 0.77% and an LGD of 57%, this corresponds to $128 in capital under SA-CCR. This compares to just $62 under CEM.

Furthermore, consider the newly introduced (since the credit crisis) CVA capital designed to capitalize CVA volatility. Using the current standardized approach, which leverages the SA-CCR EAD, the CVA capital would be an additional $185 (assuming a CVA risk weight of 0.02). This capital is defined as the 99% VaR, so 99% of the time the CVA loss should be less than this. Between Feb 28 and March 23 (the depth of the crisis), the CVA loss for the majority of the counterparties considered above was indeed less than $185, illustrating the sufficient capital to protect the banking system from the losses. However, it is worth noting how both the loss for Ford significantly surpassed the capital level, illustrating the severity of the current market turmoil. Altogether a bank is holding roughly 4x the capital against this trade than it did in the last crisis. This excess collateral will allow banks to withstand the current crisis much better than in the past.

xVAs are portfolio level quantities that account for diversification across the trades in the netting set as well as collateral held against the exposure. Most interbank portfolios are now collateralized with zero threshold and are subject to bilateral Initial Margin (another new regulation following the credit crisis), and thus attract a smaller amount of xVA than corporate counterparties. The corporate counterparties are uncollateralized and in many cases one-directional as the corporate requires a single type of trade for their purposes. A reasonable measure of corporate xVA can therefore be obtained by considering single deal types. IHS Markit has generated a set of xVA tables for various deal types. Presenting the xVAs as a function of deal maturity, strike and counterparty rating, the tables are a useful tool to quantify the xVAs to corporate counterparties. A time series of the tables over the past month of market turmoil quantifies the xVA losses banks are facing to corporate counterparties, like the analysis presented above.

For example, a table of unilateral CVA for a EUR receiver IRS traded with a BB rated counterparty is shown below. Expressed as a percentage of notional, the CVA spans from 0% for out-of-the-money short dated trades to 23.75% for an in-the-money 30yr trade.

Financial institutions that do not have xVA valuation tools, or investors looking to quantify the xVA impact to firms they are invested in may find these a valuable decision-making tool. A full set of tables can be found here: https://financialriskanalytics.net or contact Allan.Cowan@ihsmarkit.com at IHS Markit for more details on the tables.