The World Trade Organization's (WTO) Appellate Body on 10 December lost its quorum to hear new appeals after the United States vetoed the appointment of new judges. Reforms to the WTO demanded by the US are unlikely to advance during 2020, likely resulting in the growth of alternative dispute resolution pathways.

As the World Trade Organization's (WTO) Appellate Body (AB) ceases to function, around 88 trade disputes are very likely to remain unresolved, primarily involving agricultural goods; aluminum, iron, and steel; energy; and raw materials, which are traded by the United States, the European Union, and China. By 2017, the US had overtaken the EU in having the largest number of unresolved complaints against it. Complaints against the US doubled in 2018, as China, the EU, Canada, and other countries submitted 19 complaints against the US's imposition of duties on a range of goods, including aluminum and photovoltaic products. India received the largest number of complaints in 2019, with seven in total, relating to export subsidies on sugar, and duties and tariffs on ICT goods. The US has also filed the largest number of complaints since 1996 (124 in total), primarily targeting China (23) and the EU (21) and is the most frequent respondent (receiving 164 complaints). Without a functioning AB, the case backlog will increase, given that 68% of panel responses since 1996 have been appealed and referred to the AB. The entire dispute process - including appeals - is mandated by the WTO to be completed within 12-18 months, but this has increased to around 24 months on average. 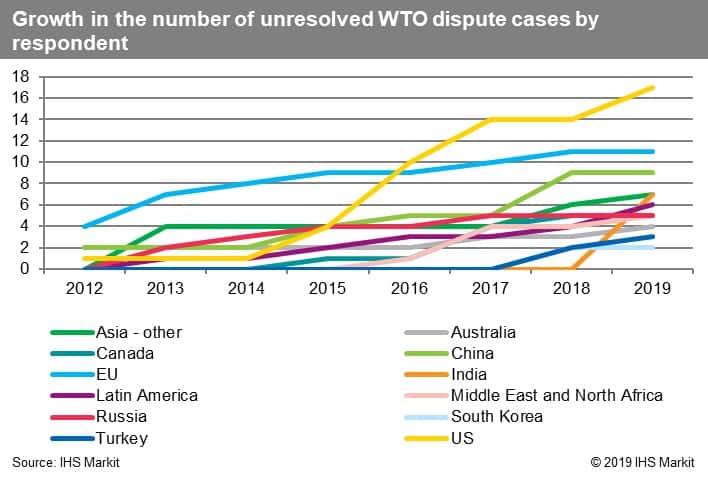 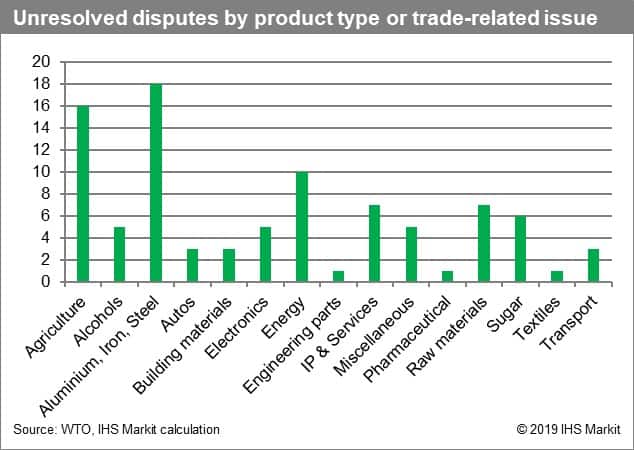 The European Commission wants to expedite appeal decisions in line with the currently mandated 90-day timeframe and incorporate environmental and labor rights considerations into WTO rules; China supports this, but the US is very unlikely to be satisfied. The Commission's proposed amendments to the AB were originally submitted in November 2018 and supported by the Australia, Canada, China, New Zealand, India, and Mexico, but were ultimately not adopted because of US opposition. The Commission believes that the US is not fully committed to reforming the WTO but does want to ensure that China fully complies with WTO rules. China would probably support the Commission's reforms as it seeks to build alliances within the WTO. The US is particularly concerned that the EU does not distinguish between market and non-market economies when calculating dumping margins; instead, using an alternative methodology that the US perceives as benefiting Chinese trade. Fifteen years after its accession to the WTO, China has, however, withdrawn complaints against the EU and the US for not granting it market economy status, indicating some flexibility in supporting new reforms.

China is probably willing to rectify trade distortions and existing government subsidies, depending on the health of its economy during 2020. However, in the absence of deeper reforms to the WTO, China is likely to rely more heavily on arbitration processes established under its Belt and Road Initiative, and by expediting the finalization of free trade agreements (FTA), especially the Korea-Japan-China FTA and the Regional Comprehensive Economic Partnership (RCEP) Agreement.

The EU is likely to begin attracting larger economies to an alternative dispute resolution pathway, including by issuing new sanctions or tariffs directly following the dispute settlement body's panel phase. The European Commission on 12 December 2019 proposed an amendment to the EU trade enforcement regulation that would allow the EU to respond if the WTO's AB did not deliver a final ruling in trade disputes, even when this ruling was blocked by another WTO member. In addition, the Commission in June 2019 finalized an alternative dispute resolution mechanism with Canada that operates under existing WTO rules, substituting for the dysfunctional AB.

Trading partners in emerging markets are more likely to resolve trade disputes by agreeing that WTO panel decisions are final, precluding WTO arbitration and appeals to the AB. Indonesia and Vietnam agreed to such a mechanism in March 2019 in a dispute over iron and steel products. 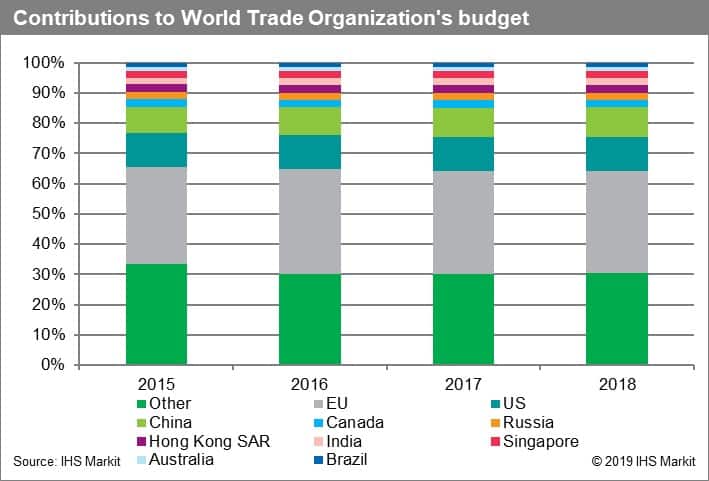 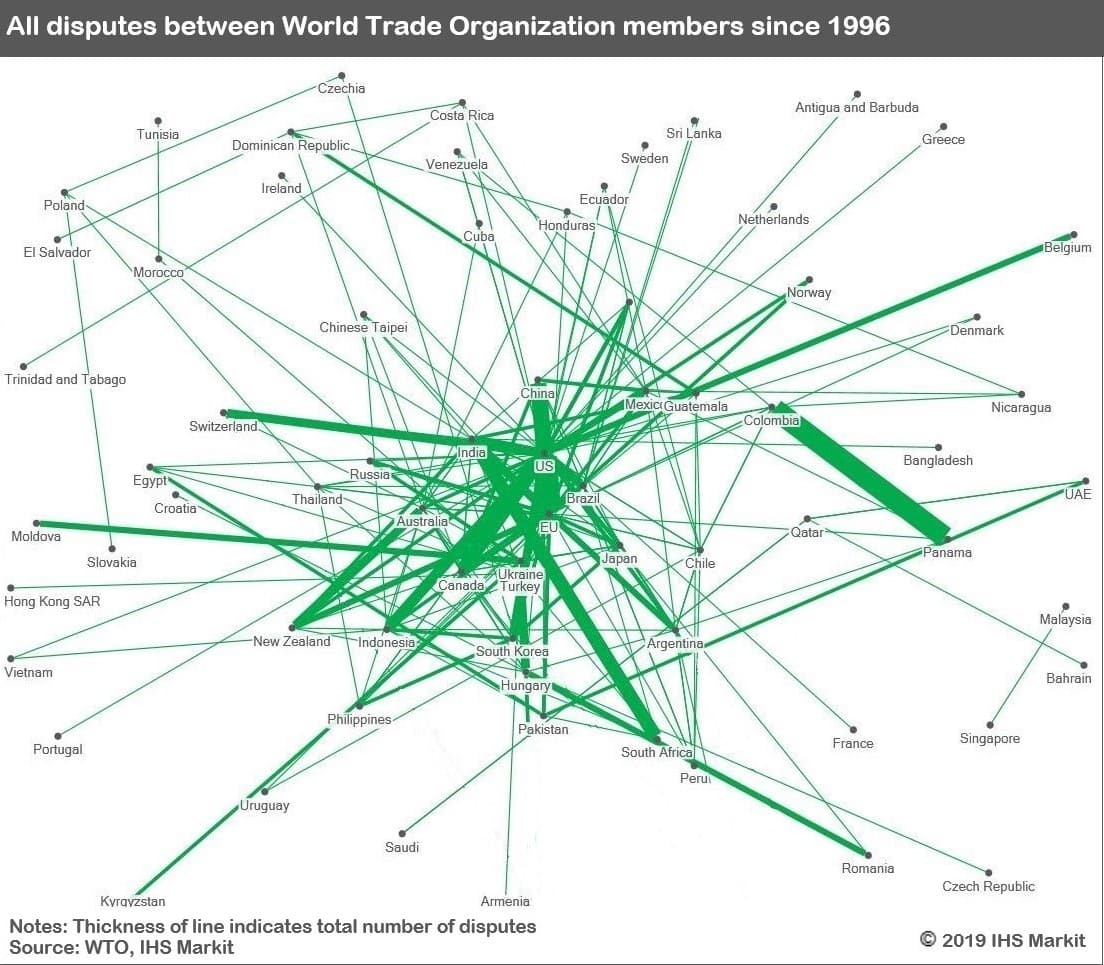 Higher input costs are being felt in chemicals once again while rubber prices continue to decline… https://t.co/vfxkZoXYp8

Higher input costs are being felt in chemicals once again while rubber prices continue to decline… https://t.co/oyXH1gNOFp

Greece's national recovery and resilience plan has the potential to be a game changer for the Greek economy. It's t… https://t.co/pkp6XiHExp