Global manufacturing export orders collapsed at an unprecedented rate in April, according to the latest Purchasing Managers Index data from IHS Markit, as worldwide demand slumped amid the coronavirus disease 2019 (COVID-19) pandemic.

All countries surveyed reported falling export volumes. China, which has reopened production lines ahead of other countries, nevertheless saw output constrained by a renewed slide in export orders, which highlights the risk of persistent weak global demand limiting global manufacturing recoveries even after lockdowns are eased.

The JPMorgan Global Manufacturing PMITM, compiled by IHS Markit from its business surveys in over 30 countries, saw new export orders decline in April to an extent not previously recorded since survey data were first available over 20 years ago.

The global PMI's export index is a GDP-weighted measure which has a powerful track record of accurately anticipating changes in world trade flows. The index fell, for example, well before other trade gauges at the start of the global financial crisis (GFC) and was early in indicating a subsequent revival in trade from the GFC.

More recently, the index showed a surge in trade up to early 2018 as global economic growth accelerated, after which the escalating US-China trade war can be seen to have dampened global exports to the extent that exports began falling in September 2018. Note that any index reading below 50 indicates a month-on-month fall in trade volumes. Exports have since remained in decline, but the rate of reduction has accelerated markedly in recent months, the index sliding to a new all-time low of just 27.3 in April, down from 49.5 in January. By comparison, the lowest reading seen during the GFC was 30.6.

To help put the PMI index numbers into context, we compare the survey gauge against the CPB Netherlands Bureau for Economic Policy Analysis World Trade Monitor, which aggregates the latest official trade statistics to provide what is considered a reliable and timely guide to global trade flows. 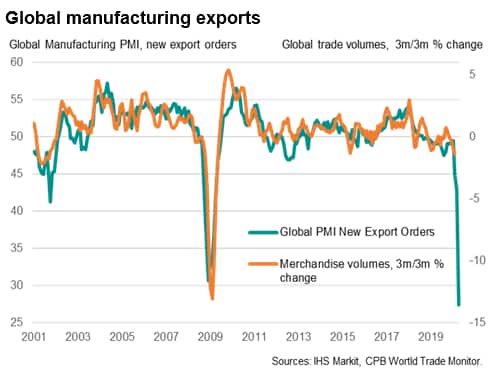 The PMI in fact shows its highest correlation (86%) when acting with a lead of one month against this CPB gauge. As the PMI data are also available over two months before the publication of each month's CPB data, the PMI therefore provides highly accurate indications of changing trade at least three months before the official data.

In terms of gauging the initial impact of the coronavirus pandemic, the comparisons suggest that the latest PMI data are indicative of global trade falling at a quarterly rate of just over 13%, or around 50% on an annualised basis.

This estimate is derived from a regression model yielding an adjusted r-square of 0.75 and SE of 1.0 using the global PMI's export index as the sole explanatory variable. (We use the natural log of the PMI index to allow for potential 'non-linearity during times of extreme growth or decline). 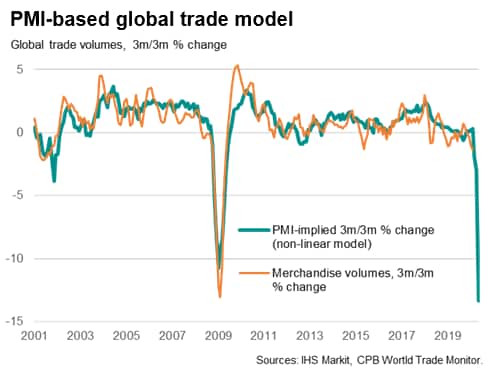 The latest manufacturing PMI survey data were collected between 7th and 24th April, a time when China continued to ease some of the restrictions on social mobility and company closures after lockdowns had been widely imposed in February. However, many other countries saw lockdowns implemented in March persist into April, with very few countries easing any restrictions.

For a second successive month, all countries surveyed reported falling exports, a universal collapse that had not been recorded by the surveys prior to March. Moreover, all saw rates of decline accelerate in April, highlighting the broad-based intensification of the collapse in global trade.

The steepest declines were seen in Indonesia and India, the former even seeing its export orders index slip into single digits.

The mildest export downturn was seen in Australia, in part reflecting some easing in the export decline to China. China was alone in the world in reporting any growth of manufacturing output in April, albeit with production levels still vastly diminished compared to before the virus lockdown.

China was notable in that, despite seeing only the second-smallest drop in exports of all economies surveyed, the rate of contraction accelerated after a short-lived easing in March. The latest decline was the steepest since the global financial crisis.

This renewed steepening in the rate of loss of China's exports highlights the extent to which global demand for goods has slumped since the onset of the coronavirus outbreak, and is a timely reminder that, while global manufacturing may see an initial rebound after lockdowns are eased and production lines are restarted, albeit even gradually, a lack of demand will limit these recoveries and could well cause a second-dip in production. 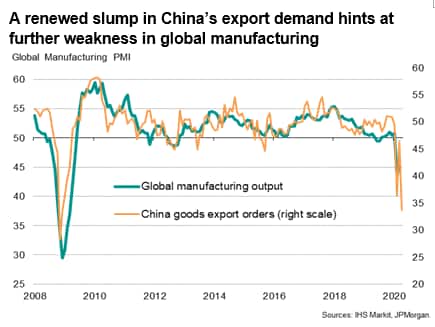