Worldwide PMI surveys indicated that manufacturing more or less stagnated in February, with growth of business activity dropping to a 33-month low amid a faster decline of global trade flows. Export sales fell for a sixth straight month, with the rate of decrease accelerating. Almost two-thirds of countries surveyed reported falling export orders, while the number of countries in manufacturing decline has risen to 13 of the 30 included in the global PMI. 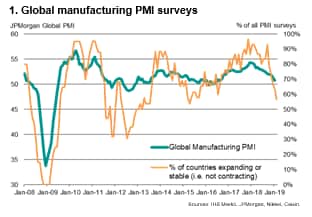 Notable economies in manufacturing decline now include Germany (which recorded the steepest export fall of all countries), China and Japan. Both the Eurozone and Asia as a whole are consequently now in manufacturing downturns. Growth also slowed sharply in the US and to a lesser extent in Canada, pushing North American growth to an 18-month low.

Price pressures meanwhile eased, with input costs rising at the slowest rate since September 2016, largely reflecting weakened pricing power among sellers as a result of the slowdown in demand.

Manufacturing PMI at over 2½-year low

The headline JPMorgan Global Manufacturing PMI, compiled by IHS Markit, fell from 50.8 in January to 50.6 in February, its lowest since June 2016.

The PMI is a diffusion index derived from five survey questions, where 50 indicates no change in business conditions compared to the prior month. At current levels, the PMI signals only a very modest improvement in the health of the manufacturing sector; the rate of growth having steadily weakened over the course of 2018. 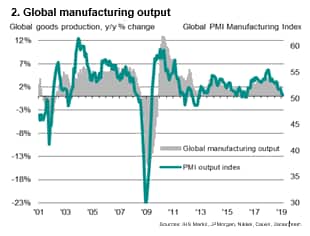 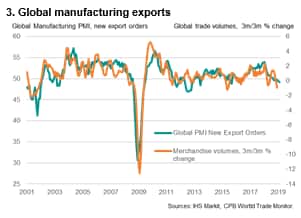 Looking into the detail of the PMI, output growth slowed to its lowest since June 2016, down to levels broadly consistent with global manufacturing output growth stalling. Behind the weakened production trend was a second successive month of stalling new order inflows, painting the weakest picture of demand since late 2012. Global export orders fell for a sixth consecutive month, deteriorating at the fastest rate since May 2016 and suggesting that softening global trade flows are leading the manufacturing slowdown.

In a sign of excess capacity developing, backlogs of orders fell for a second successive month as completed work was not fully replaced by new business. The decline represented the first back-to-back monthly drop in order book backlogs since May 2016.

Expectations of future output meanwhile slipped to the second-lowest since comparable sentiment data were first available in late-2012.

With order books deteriorating and future optimism waning, hiring remained subdued. The rate of hiring remains one of the weakest seen over the past two years. Producers likewise cut back on their purchases of inputs for the first time in 33 months, causing inventory levels to fall to the greatest extent since August 2016, as cost cutting prevailed.

The reduced growth of input buying helped drive an easing in supply chain delays to the lowest seen since November 2016, which - alongside lower oil prices - was a key factor cited as helping alleviate inflationary pressures. Average input cost inflation has slowed markedly since the middle of last year, dropping in February to its lowest since September 2016.

Selling price inflation picked up to a three-month high, however, albeit driven up to a large extent by the first increase in prices charged by Chinese manufacturers for four months. 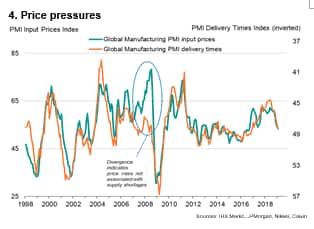 43% of all countries now in decline

The strongest growth was recorded in India, which enjoyed its second-best month since 2012, followed by Greece and Ireland. The US meanwhile dropped from second to sixth place behind Myanmar and Brazil as growth hit an 18-month low. Other relatively strong performers included Australia, the Netherlands, Canada and Mexico, though only the latter enjoyed an acceleration of growth during the month.

At the other end of the rankings, Taiwan replaced Turkey as the worst performing manufacturing economy (chart 5), followed by South Korea and Germany. Poland and the Czech Republic also contracted again, in part reflecting supply chain ripples from weak demand in Germany and other Eurozone countries. The eurozone as a whole slipped into decline for the first time since mid-2013.

Six of the 13 economies in manufacturing decline were found in Asia, including both China and Japan, leading to a second month of contraction (though only marginal) across the Asian region as a whole during the month. 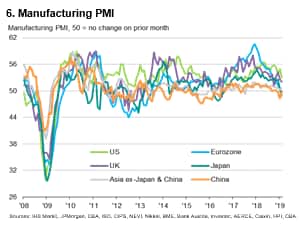 For many countries, national manufacturing trends are inevitably closely tied to export performance. In particular, Germany's poor performance in February was reflected in German exporters reporting the steepest export decline of all countries surveyed during the month.

Of the 29 economies for which export data are collected, exports rose in just 12 countries.

The strongest export gains were seen in the countries with some of the highest overall PMI readings, namely India, Mexico and Greece. Ireland was also part of this group after being buoyed by advance sales to the UK ahead of Brexit. 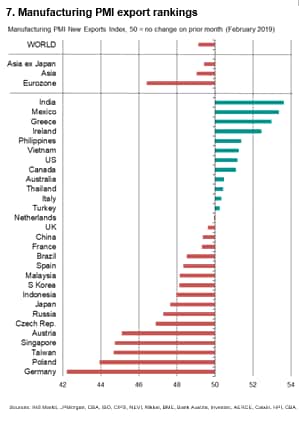