Global coffee supplies are still expected to be plentiful this season, despite a drop in production in 2019/20.

World coffee production may fall to 167.2 million 60-kilo bags in the current crop year, down from a record 175.3 mln the year before, according to IHS Markit* forecasts.

Arabica output is seen dropping to 96.3 mln bags from last year's 107.6 mln. In contrast, robusta production may rise to a record 70.9 mln bags in the new season from 67.7 mln a year earlier, which had been a record itself. 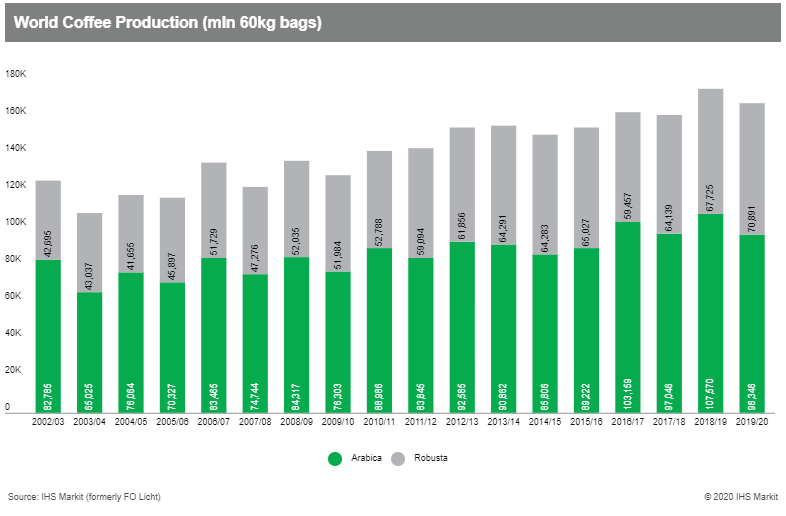 Brazil's coffee production fell to 57.1 mln 60-kg bags in 2019/20 from a record 64.8 mln a year ago, which was still the highest ever for an off-year. Even though arabica production fell to 39.1 mln bags from 48.7 mln due to the biennial tree cycle, the downturn in overall production was dampened by a rise in robusta production to 18.0 mln bags from 16.1 mln. Attention with regard to Brazil is already on the current 2020/21 crop. While some early predictions put the crop in a range of 70-75 mln bags, trees were hit by a series of weather-related strikes, including frost last July and dry weather in recent months. That said, IHS thinks that the crop may reach about 65-68 mln bags.

Colombia's coffee production in 2019/20 was initially expected to rise a bit to 14.3 mln bags from 13.9 mln last year as good weather led to a successful flowering for the 2019/20 main crop. Even though output in May was again a bit up on the year, IHS has revised down its crop outlook to 13.9 mln bags. Preventing the spread of berry borer beetles and harvesting in spite of labour shortages will be key challenges for the country in the remainder of 2020.

Honduras harvested only about 6.6 mln bags of coffee in 2019/20, down from 7.2 mln a year ago. Output has been declining since a record 7.7 mln bags were produced in 2016/17, mainly due to poor global coffee prices. The glimmer of hope is that output may bounce back in 2020/21 as the government has provided fertilizer to farmers.

Coffee production in Guatemala is seen less than 0.1 mln bags smaller year-over-year in 2019/20 at 3.8 mln bags. While the weather was better than the year before, the sector has also been affected by the rather long prevalence of poor prices.

Costa Rica's coffee harvest rose slightly to 1.3 mln 60-kg bags in 2019/20 after falling to a four-decade low of just below 1.2 mln bags the year before. There is some concern with regard to availability of harvest workers during the early harvest of the 2020/21 crop in some regions during August. Most of Costa Rica's coffee sector workers come from Nicaragua or Panama and borders are closed. 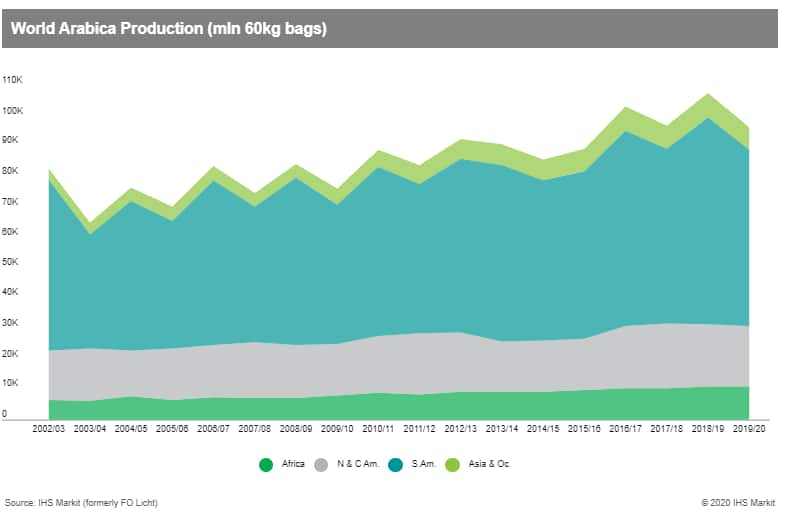 Vietnam's coffee production in 2019/20 was hardly changed at 31.5 mln bags compared with 31.4 mln last season. Farmers are no longer moving from coffee to pepper as black pepper prices have been falling continuously over the past five years. Current weather conditions for the development of the 2020/21 crop are favourable, but output will be at least 10% lower than in 2019/20 because previous drought will result in smaller-sized beans, local sources say.

Indonesia's coffee production in 2019/20 recovered to 10.0 mln bags after falling to just 8.9 mln the year before. However, robusta output is expected to decline in 2020/21. A delayed start of the rainy season in lowland areas of southern Sumatra is seen affecting yields and has already led to a postponement of the start of the first coffee harvest from April to June.

Africa's top coffee producer, Ethiopia, produced another bumper crop of an estimated 7.9 mln bags in 2019/20, up further from 7.7 mln a year earlier. This is due to favourable weather conditions as area under cultivation is largely stagnant.

Uganda's coffee production in 2019/20 is seen climbing to 5.3 mln bags from 4.7 mln the year before due to a strong rise in robusta output. The government has been pursuing a planting program in recent years to drive up exports, with farmers given free seeds to expand their acreage and to replace ageing, unproductive trees. The program aims to increase Uganda's coffee production to 20 mln bags by 2030. 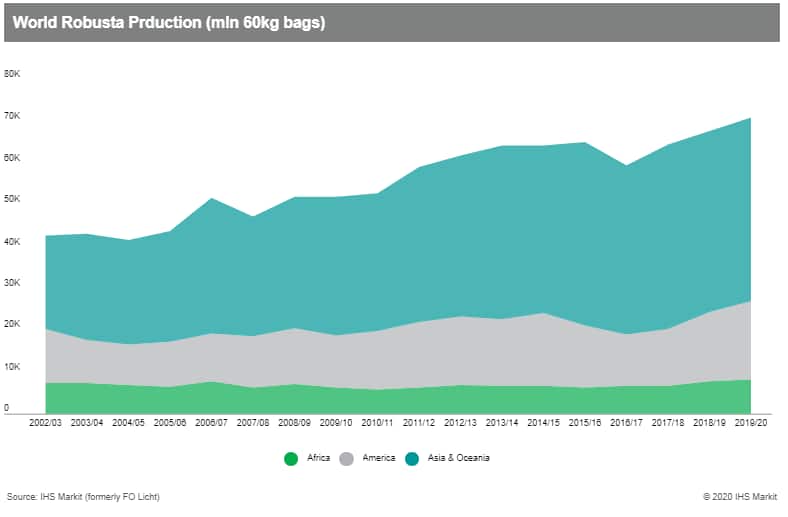 Arabica coffee prices have fallen about a third since mid-March to reach a seven-month low of 94.55¢/lb at the beginning of June. Robusta coffee futures hit a 14-year low of USD1,109 a tonne on April 22, the lowest for a most-active contract since June 2006 and have intermittently gained somewhat amid expectations for lower robusta output in Vietnam and Brazil in 2020/21.

Fundamentally, coffee production has been in reverse gear in 2019/20 but the drop is by no means sufficient to put the market on a better footing. In fact, coffee production in 2019/20 is not only the highest ever in a Brazilian off-year but also the second-highest ever after the record 2018/19 harvest. This is not least the case because Vietnam produced its biggest crop ever, third-ranked Colombia's output is seen largely flat, while Indonesia and Uganda are experiencing massive increases in output.

Looking forward, arabica futures can be expected to remain under pressure in coming weeks as Brazil's 2020/21 harvest is currently progressing well with no frost threat in sight. A recovery of the Brazilian real to about BRL5.15 per US dollar from levels close to BRL6 hit in mid-May did not help to support prices, indicating how bearish the market sentiment is in the short term. A test of new lows looks unavoidable.