Most Gulf Coast refineries are shutdown or at reduced rates and large portions of the waterborne export terminals, rail, and pipeline infrastructure have also been impacted in the wake of Winter Storm Uri.

IHS Markit currently estimates more than 5.2 million barrels per day (b/d) of Gulf Coast capacity and 730,000 b/d in PADD 2 has been impacted by the winter weather. Unlike the major damage caused by Hurricane Harvey in 2017, refineries appear to be in relatively better condition, and we expect the vast majority of refining capacity will likely be able to quickly restore operations once power and natural gas supplies return to normal levels.

A large volume of crude oil and natural gas production is shut-in due to lack of electricity and problems with pipes, roads and personnel. Point Logic by IHS Markit estimates that close to 20% of lower 48 U.S. natural gas production has been shut-in in the first half of February, with the Permian Basin accounting for the largest share. While precise crude oil production figures are not available, an equivalent 20% cut in lower 48 U.S. crude oil production would imply a production drop of around 2-2.2 million barrels per day (MMb/d) of output, but this could prove to be even higher—perhaps as high as 4 MMb/d. 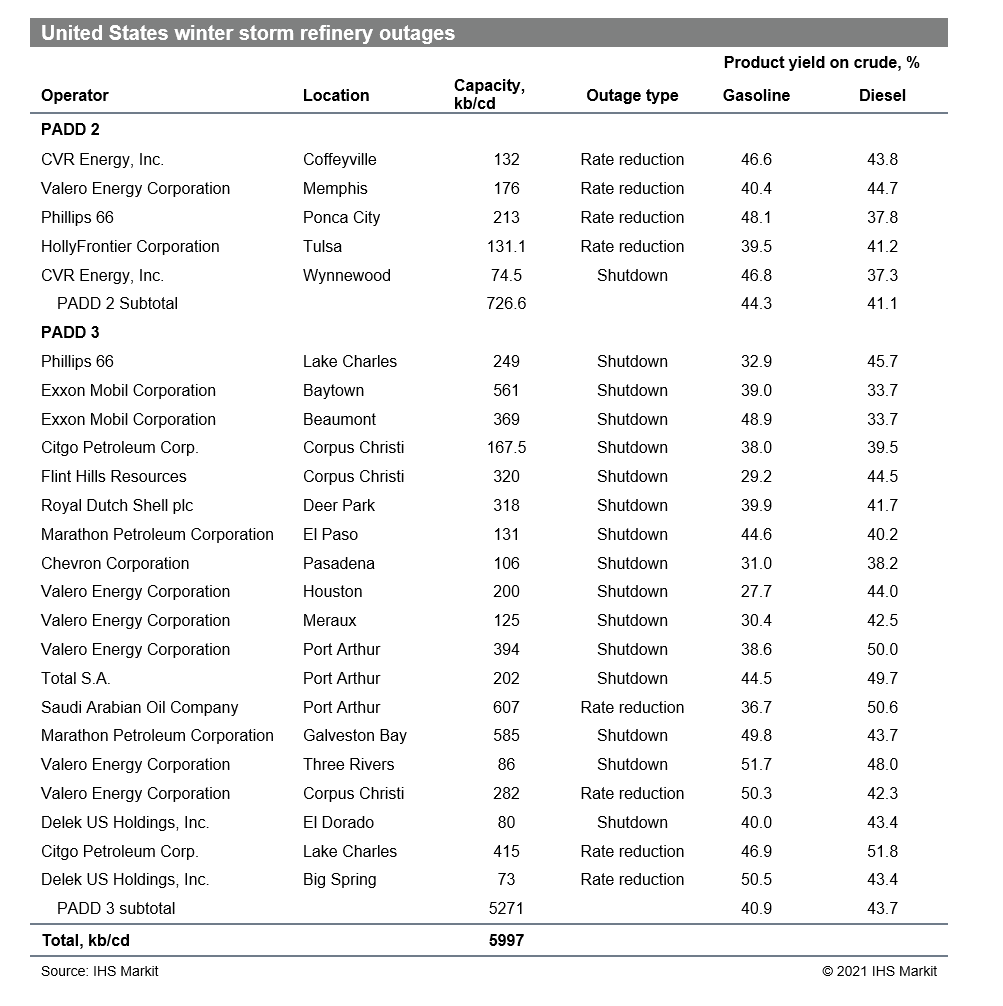 Major pipelines serving the east coast with USGC supply appear to be functioning. Colonial Pipeline released a statement stating they are "continuing operation of the system and will make operational and scheduling adjustments, as needed, to prioritize safety and continuous operation of the system." However, refineries may have issues supplying the pipeline and may need to draw down inventory. Export terminals impacted by the storm includes the Houston Ship Channel, Freeport, Corpus Christi, Sabine Pass and Lake Charles.

Transportation demand in Texas for both gasoline and diesel is expected to be negatively impacted as the storm has shut down all major metropolitan areas including Dallas/Fort Worth, Houston, Austin, San Antonio and El Paso, which represents approximately 20 million residents. Major airports were also shut down due to the storm.

Futures price, as well as physical product prices, reacted swiftly with gasoline leading the charge. Refined product futures have also moved significantly higher on the refining downtime on the Gulf Coast. Spot markets have been relatively "homogeneous" throughout the country, a relative rarity.

Of the U.S. spot gasoline markets, a little over a nickel separates the highest and lowest prices. Weather is still supportive for diesel prices, though the gains in the ULSD futures contract have been modest in relation to RBOB. Nevertheless, prices are or near more than one-year highs in the $1.80 per gallon area.

Global price volatility has caused an increase in #LPG prices. For #LatinAmerica, up to 80% of the regional LPG dem… https://t.co/bXs7kkU4Jf

Carbon reduction benefits of switching to #naturalgas in the near-term could support deeper #decarbonization over t… https://t.co/TRKVtlO1et

RT @DanielYergin: You can’t go anywhere in the energy world (or the policy world) without running into two words—#EnergyTransition. What do…