Winter is coming: Alaska at a crossroad

The state of Alaska is facing a difficult decision, with reduced oil prices and oil production negatively impacting revenue for local government. Up for vote this November was Alaska Ballot Measure 1, which would have increased taxes on numerous oil producers in the state. While this would have increased revenue for the government, it would have also deterred investment dollars from operators going forward. As winter approaches, activity is beginning to ramp up in preparation for the winter season on the North Slope of Alaska. When ice begins to cover the terrain, these isolated areas become more easily accessible, allowing more development and exploration drilling to take place. ConocoPhillips, the basin leader, and a large group of small independents are gearing up for exploration and development activity throughout the basin. As successful exploration continues, new source volumes and commissioning of recoverable resources currently under appraisal or development will serve to maintain production levels above the volumetric lower threshold for the Trans-Alaska Pipeline System (TAPS) export infrastructure, thereby extending the operational life of the North Slope.

The 2020-21 exploration drilling season is shaping up to be another slow year compared to pre-2020 activity. 88 Energy (through its wholly owned subsidiary Accumulate Energy Alaska) is aiming to drill two wells at its Project Peregrine in the National Petroleum Reserve—Alaska (NPR-A), where it recently acquired the assets of XCD Energy. The company has started the permitting process at its Merlin and Harrier prospects, targeting the prospective Nanushuk interval. Drilling operations are set to begin in the first quarter of 2021, pending the outcome of farmout discussions. Pantheon Resources (through Great Bear Petroleum which it acquired in 2019) has applied for the creation of the Talitha Unit along the Dalton Highway 23 miles southwest of the town of Deadhorse, where it plans to drill the Talitha A well down to the base of the Kuparuk sand. The operator has reportedly been looking for a partner to share the financial risk of its North Slope portfolio. Delay in securing a partner may affect the projected February 2021 spud date for the well. Pantheon has also applied for the creation of the Alkaid Unit about three miles to the north, where it will construct a driveway and pad suitable for year-round activity. The company plans to spud the Alakaid 2 well in the third quarter of 2021, which will penetrate the entire Brookian section and include a 10,000 ft lateral. ConocoPhillips, whose 2019-20 exploration campaign of seven wells was cut short to only three wells due to the collapse in oil prices precipitated by the COVID-19 pandemic, has not yet announced if it plans to resume its program in 2020-21. 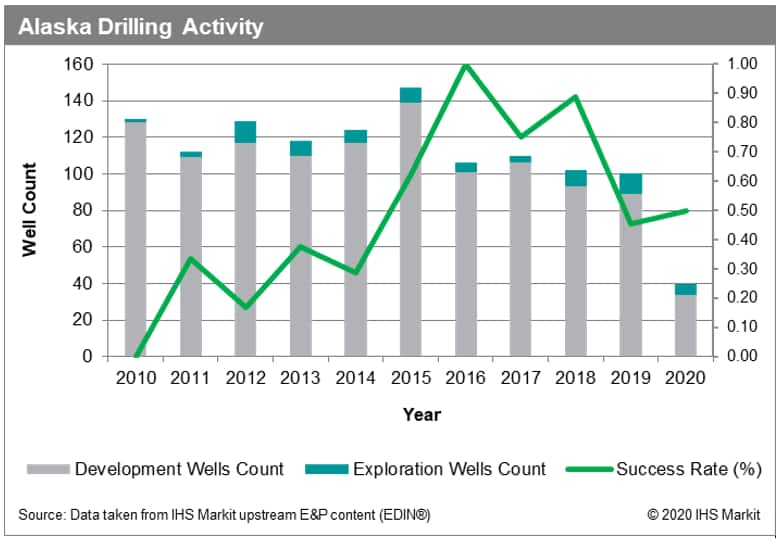 The successful 2019-20 drilling season serves as a backdrop for upcoming activity. Oil Search made two discoveries near its operated Pikka field and Horseshoe block. East of Pikka, in the company's Quokka area, the operator drilled Mitquq 1 and the Mitquq 1 sidetrack, where it discovered oil and gas pay in the Nanushuk and Alpine intervals. While Oil Search has not yet publicly issued reserves estimates for Quokka, pre-drill resource estimates ranged from 200 MMbbl to 500 MMbbl with the development concept being a tie-back to infrastructure at Pikka. West of Horseshoe, the Stirrup 1 well intersected oil pay in the Nanushuk reservoir. Pre-drill resource estimates ranged from 200 MMbbl to 400 MMbbl, with Oil Search having previously stated that a successful outcome there could de-risk additional fairways that could lead to a stand-alone development. ConocoPhillips also made a discovery in the Nanushuk interval at the Harpoon prospect in the NPR-A but provided no further details. Pre-drill resource estimates at Harpoon ranged from 400 MMbbl to 750 MMbbl. Harpoon is located southwest of the company's Nanushuk development at the Willow field, where ConocoPhillips drilled two successful delineation wells during the recently concluded drilling season. The company expects to reach a final investment decision (FID) for Willow in 2021 with first oil planned for 2025-26. Expected peak production is 160,000 b/d, with cumulative production of roughly about 590 MMbbl over the 30-year life of the field.

The Alaska North Slope basin upstream operations are technically and economically challenging because of remote locations, limited infrastructure and difficult access routes. Exploration activity began in the basin in 1945, however, commercial development was delayed until commissioning of the 2 MMbbl/d TAPS export pipeline in 1975. Peak liquids production was last reached in 1988 and since has been in decline, falling to around 420,000 bbl/d in 2019. Volumes from currently producing assets are projected to threaten the TAPS minimum operating threshold of 250,000-300,000 bbl/d, jeopardizing the operation of Alaska's sole export route for liquids production. New source volumes from discovered, undeveloped resources have the potential to revitalize the basin, delivering a projected 1 MMbbl/d of incremental production by 2038 through the development of 26 assets expected to reach initial production over 2020-45. However, this outlook is subject to two material uncertainties. First, is the ability of key operators to secure the financial partners necessary to proceed with these development projects—a concern for most projects outside of those being developed by basin leader ConocoPhillips. Second is growing environmental opposition to exploration in the basin and in the NPR-A and the Coastal Area of the ANWR. Companies being aware and focused on ESG (environmental, social, and governance) issues has never been more important than our current era. One example of how ESG impacts Alaska is the drilling season never commences on a set date. Operators are required to wait until the terrain is sufficiently frozen before mobilizing completely, as pre-mature movement over the terrain could damage foliage for the summer months, thus negatively impacting the environment. 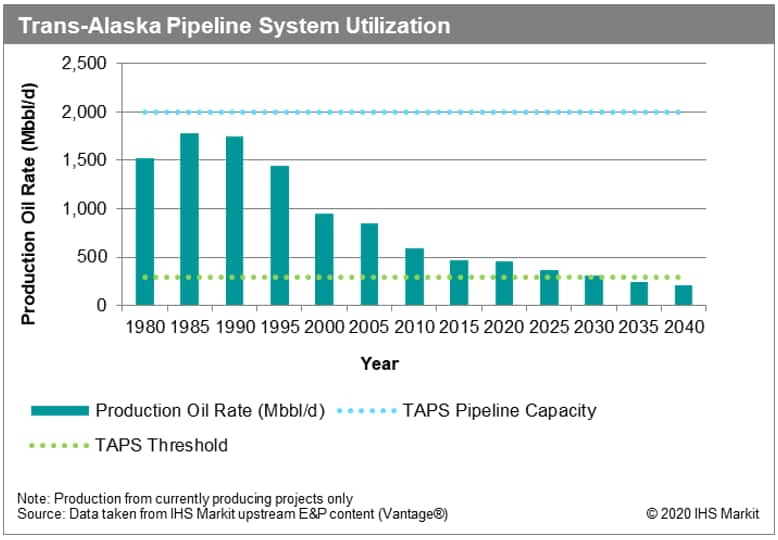 The importance of developing new projects along the North Slope cannot be understated. It is our prediction that production will hit critically low levels in the 2025-2030 range if new projects are not brought online. If production were to be permanently shut-in during 2025, it would lead to approximately US$ 10 billion in after-tax cash flow and over US$ 30 billion in government revenue being lost over the life of the producing projects. These numbers amount to almost an entire year of Alaska's current GDP and grow significantly when we include lost revenue from new projects that would be stranded. Certain Alaskan government officials attempted to offset the declining revenue for the state by implementing Alaska Ballot Measure 1, which was up for vote this November 3rd. The initiative would have increased taxes on some of the largest producing fields in Alaska, such as Prudhoe Bay and Kuparuk. Looking strictly at the financial contributions towards the bill in the state finance reports, it is clear the majority (more than 90%) did not want this bill to move forward. It appears their efforts have been successful, as the bill did not pass, with 100% of precincts reporting and almost 65% of votes opposing the bill. 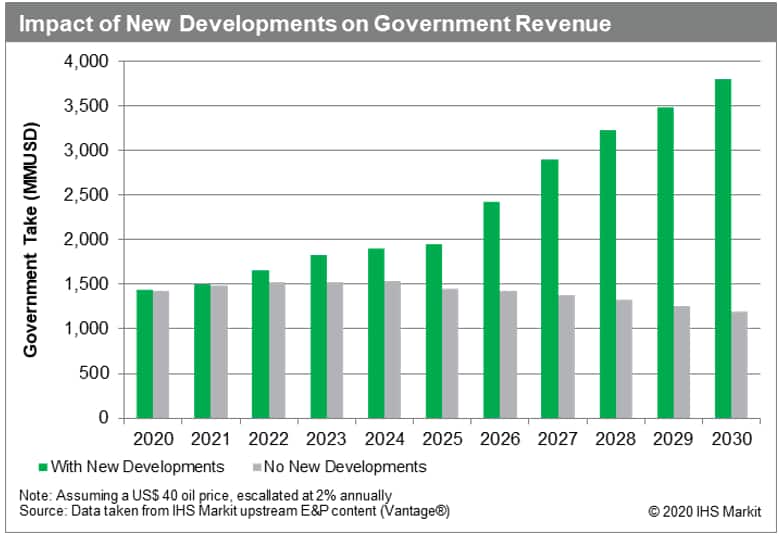 Figure 3:Government revenue with and without new developments along the North Slope

According to Alaska's state website, nearly 85% of the state's budget is supplied by oil revenue, further highlighting the importance of the North Slope assets. The value of producing projects relies on fresh field production to keep from pre-maturely shutting in. The new projects which require dedicated production facility have a break-even oil price at or below US$ 30 in some cases, while new projects that will be incorporated into existing facilities have break-even oil prices under US$ 20 at times. This allows these assets to be competitive on a global scale, while ultimately reversing the dwindling production in the region. Successful development of the assets will help generate just under US$ 5 billion annually for the Alaska government on average from 2025-2040, critical for a region dependent on oil and gas revenues to maintain its existing standards of living. This revenue represents over 300% increase from current levels.