In first half 2019, IHS Markit recorded nearly 30 GW of publicly announced wind turbine contracts globally, up by 67% compared to the previous half. In total, orders were placed for nearly 160 projects which will be supplied with over five thousand turbines provided by eighteen manufacturers.

With 60% of the global order intake, the Asia Pacific region led from the front in first half 2019. Volumes were boosted by strong contracting activity in both Mainland China and India, further complemented by Taiwanese offshore orders. Turbine contracts inked from North America also quadrupled in first half 2019 compared to the previous half driven by the United States, which is bracing for a record year of installations in 2020. European orders declined by 56%, impacted by the ongoing slowdown in Germany coupled with lower offshore orders. In Latin America a bounce back in the Brazilian market more than compensated for lower activity in Argentina and Mexico, while only a single order was recorded from the Africa and Middle East region. 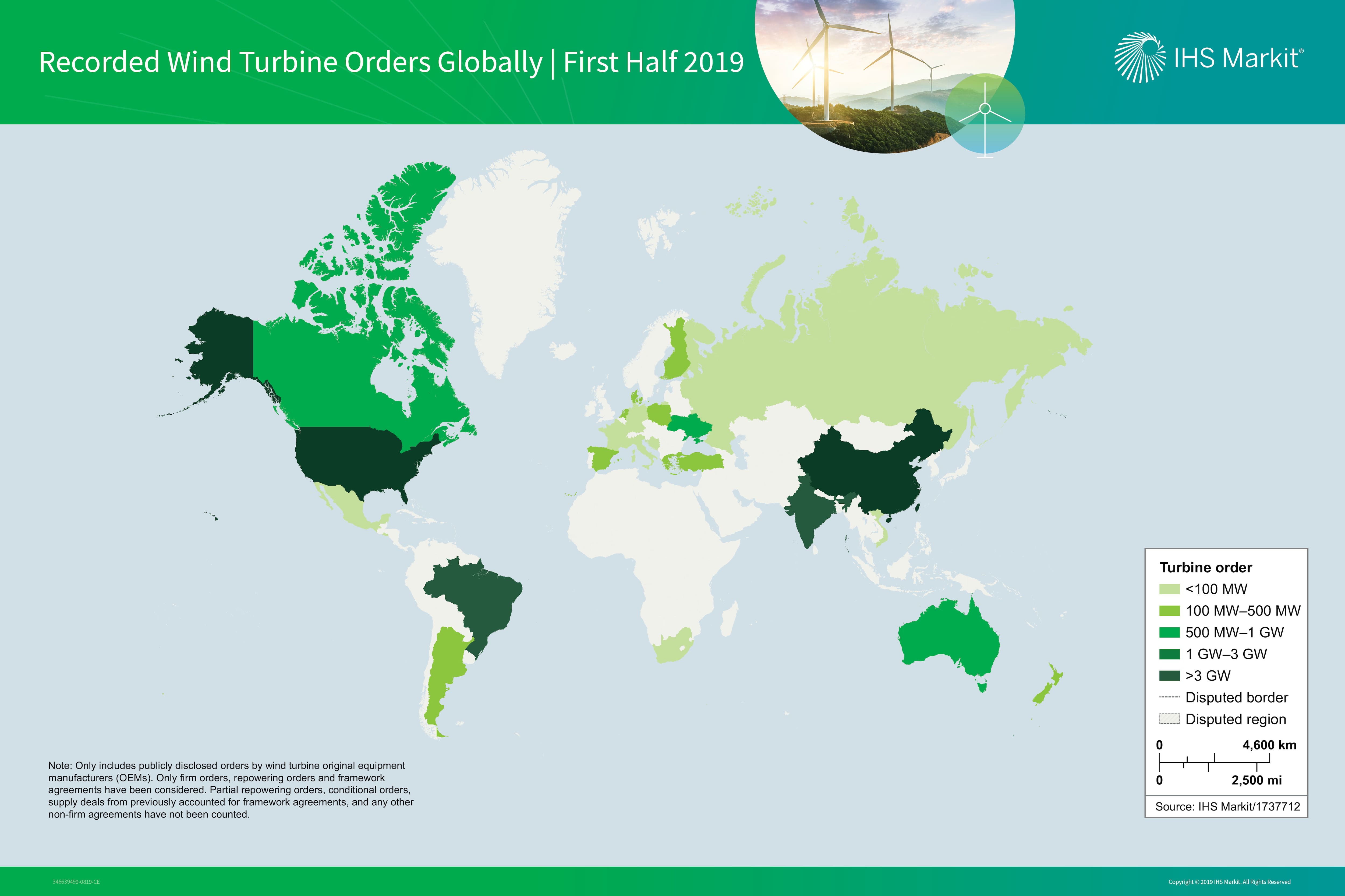 Danish manufacturer Vestas retained its lead in first half 2019 with 7 GW of turbine contracts signed. Mainland Chinese vendor Ming Yang Wind Power surged to second spot on the back of large offshore contracts signed in its home market. Total offshore wind turbine orders recorded from the Asia Pacific region in the first half of 2019 exceeded that of Europe. This benefited Siemens Gamesa which took third spot driven by large offshore orders secured from Taiwan. The fourth and fifth spots were occupied by Nordex and GE respectively. Both vendors benefited from the ongoing development rush in the United States created by the scheduled phase-out of the Production Tax Credit (PTC) and scored large orders from the country.

The shift towards larger machines has sped up with 50% of the recorded order intake in first half 2019 to be supplied using turbines sized above 3 MW, and with rotor diameters over 120 m. A growing need for wind turbines optimized for site specific conditions have resulted in vendors offering a broad range of turbine configurations which generally entail flexible nominal ratings and multiple rotor options. Over 2017 and 2018, numerous vendors had already announced onshore turbines rated at 4.X MW. The race for technology supremacy intensified further in the first half of 2019 with Vestas, GE, and Siemens Gamesa also launching their new 5.X MW platforms.