Wind turbine manufacturers cash in on the ongoing installations rush

IHS Markit tracked 62.5 GW of new wind installations in 2019, 22% higher than the year before. While over 90% of this was in onshore, the offshore sector also remained bullish with annual installations growing by 45%.

Installations in Asia Pacific, Europe, and North America grew by 15%, 38%, and 42% respectively in 2019, while contracting in other regions. Nearly 60% of all new installations were in mainland China and the United States where imminent subsidy expiries have resulted in a connection rush. These markets are expected to continue driving global wind growth till 2021, in turn significantly benefiting turbine suppliers with a strong presence there.

The five largest OEMs remained unchanged in 2019, and further consolidated their presence by installing nearly 70% of the global total. While a strong presence in the top two markets guarantees short term growth for these players, regional diversification and strong exposure in offshore will be required to cement long term leadership. 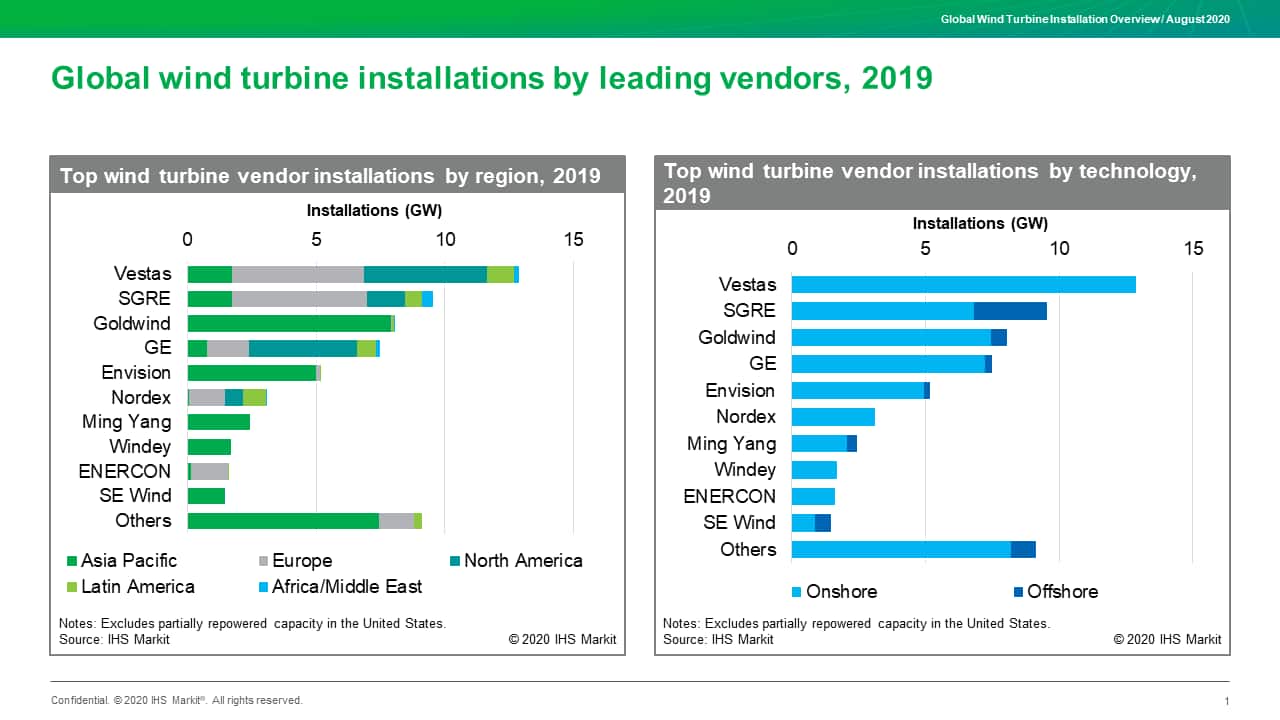 Vestas held on to the top spot leveraging its global footprint, while SGRE surged to second place on the back of strong offshore installations. Installations of GE, Goldwind, and Envision were driven by their home markets, while the ongoing boom in mainland China also enabled local OEMs including Windey, Shanghai Electric, and Dongfang Electric to climb the ranks. In contrast, other regionally focused OEM's like ENERCON and Suzlon saw installations plummet due to ongoing challenges in Germany and India respectively.

In contrast, offshore portfolios remain less complex with OEMs competing with a "bigger is better" strategy. Although 7.X MW turbines were the most popular in Europe last year, short term additions are likely to be dominated by 8.X MW variants, moving up to 10.X MW+ models in the medium term. Installed offshore turbine sizes in mainland China continued to play catch-up with Europe and were mostly in the 3 - 6 MW range. This may change in the future as multiple local OEMs have announced 10.X MW+ models while GE has also moved to localize its Halidade-X turbine in the market.

Indrayuth Mukherjee is a senior analyst with the Gas, Power, and Energy Futures team at IHS Markit.