Wind power trends to watch through 2018

IHS Markit analysts attended the American Wind Energy Association's (AWEA) Wind power conference, held 7-10 May 2018 in Chicago. We presented the IHS Markit North American power market outlook and spoke to industry players. Below are some of the key themes we discussed during the conference.

Developers are trying to build as much as they can by 2020, after which the 10-year, $24/MWh federal Production Tax Credit (PTC) starts to phase out. That means scrambling to move projects forward, with any delay in online dates threatening project economics. At the same time, industry players must decide how much to expand now, knowing that the market is likely to contract early next decade. They will need to decide soon if they want to procure turbines this year to meet safe harbor provisions to secure the 60% PTC for projects online in 2022.

Many predicted that turbines with nameplate capacities of 4 MW or greater and rotor diameters of 140 m or larger will become standard, raising annual energy production and lowering the levelized cost of electricity (LCOE). That will be quite a change for the industry, given that the largest turbine installed in 2017 was Vestas's 3.45 MW, 126 m machine. To use such large turbines will require creative solutions for transporting components, particularly blades. Although other levers exist to reduce the LCOE (e.g., more pension funds with lower required returns owning assets), the industry is banking on turbine evolution to make wind economical post-PTC.

Even with a competitive LCOE, a developer cannot build a project if it cannot deliver the power to the customer. Given that project delays can hurt the value of the PTC, utilities are looking for projects that already have interconnection agreements. Project developers, meanwhile, are seeking sites where they will not have to worry about congestion, a growing concern in the Midcontinent Independent System Operator in particular, even if that means building in places with suboptimal wind resources.

Major utilities like AEP and Xcel Energy are planning large rate-based expansions of owned wind assets. This provides opportunities for developers willing to build then transfer wind projects to other owners but is challenging for players committed to an independent power producer model that are finding intense competition for power purchase agreements (PPAs). 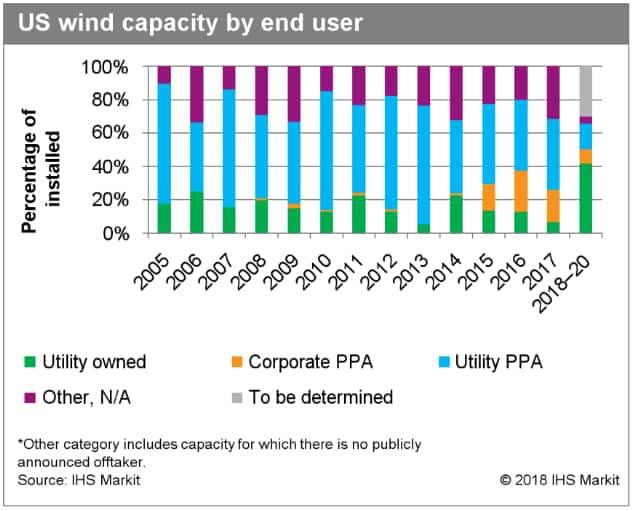 The industry is still learning what to do with storage.

There is hope that energy storage, particularly batteries, can help wind's integration and competitive position. However, most players are still coming up the learning curve. Beyond savings on development costs and interconnection, there is not yet a strong argument for co-locating battery storage systems and wind projects. This could change as battery costs fall.

A rising tide of interest in offshore wind.

Love it or hate it, industry players are beginning to take offshore wind seriously. Despite high forecast costs, north-eastern states appear committed to carve-outs for the technology owing to a mix of benefits including high generation during winter peak hours and economic development in coastal communities. Even if planned targets are met, installations will likely come too late in the 2020s to help the wind industry in the immediate aftermath of the PTC phaseout.

Learn more about our power and renewables analysis.