Will US Iran tensions destabilize the Middle East and global oil markets?

Background information on the Iranian economy

Its central location in Western Asia, and its access to the crucial Strait of Hormuz (responsible for approximately 20% of global crude oil traffic and 40% of maritime traffic), gives it large geostrategic significance. Iran itself is responsible for 10% of the world's proven oil reserves and 15% of global gas reserves.

Iran's economy is characterized by a large involvement of state and a large public sector (approximately 60% of Iran's economy is still centrally planned). The Iranian government directly owns and operates hundreds of state-owned enterprises (SOEs) and indirectly controls many companies affiliated with the country's security forces. The economy is to a large extent inefficient partly due to poor governance and low institutional quality and partly as a result of trade sanctions imposed on Iran. Distortions - including widespread corruption, price controls (especially on food and energy sector, informal (black) market, widespread subsidies, an inefficient banking system, burden the Iranian economy, undermining the potential for private-sector-led growth. The private sector is more present in small-scale workshops, farming, selected manufacturing sectors, and services, in addition to medium-scale construction, cement production, mining, and metalworking.

The economy is highly dependent on oil and gas exports which is archetypical for the so-called resource curse affected states. This makes the state of the economy highly dependent on the price of oil and gas and the potential sanctions on exports of the products. Most of the revenues of the state depend on the exports of the two commodities (approximately 80% at the beginning of the 2010s).

The lifting of most nuclear-related sanctions under the Joint Comprehensive Plan of Action (JCPOA) in January 2016 initiated restitution of Iran's oil production and led to an increase in the revenue of the state that drove rapid GDP growth, decrease in unemployment rates and inflation rates.

Economic growth declined in 2017 as oil production plateaued. In May 2017, the re-election of President Hasan Ruhani generated widespread public expectations that the economic benefits of the JCPOA would expand and reach all levels of society. Structural reforms that strengthen the banking sector and improve Iran's business climate to attract FDI and encourage the growth of the private sector is necessary. It is worth stressing, that the sanctions that are not related to Iran's nuclear program remain in effect, and these—plus fears over the possible re-imposition of nuclear-related sanctions—will continue to deter foreign investors from engaging with Iran.

The pullback of the US form JCPOA created significant tensions. The Trump administration levied new sanctions that came into effect in mid-2018 and the Iranian economy has been severely affected. Real GDP growth rates were -2.13% in 2018 and -7.66% in 2019. CPI inflation went up to 21.1% in 2018 and 40.6% in 2019. The unemployment rate in 2019 went up to 13.4%. The sanctions-stricken Iranian economy is thus in stagflation. The economic distress led the Iranian government to initiate several aggressive foreign operations in order to boost internal morale and decrease internal pressures on the government.

The tensions increased significantly in the summer of 2019 after an American drone was shot down, the obduction of several tankers in the Persian Gulf and the attacks on a Saudi Arabian oil refinery linked to the Iranian regime. The recent escalation of tensions is due to the killing by an American drone of Iran's top general, Qasem Soleimani (key military and political figure) on 3 January 2020 in Baghdad. On 5 January 2020 Iran declared its complete pull back from the nuclear deal as a first retaliation against the attack and in the early hours of Wednesday 8 January 2020 Iran fired rockets at two air bases in Iraq that house US troops. This instability could easily spill over to the whole of the Middle East destabilizing the region and increasing the likelihood of global slowdown.

The sanctions have caused a reorientation of Iranian exports and imports from the developed western economies towards developing or transition states and in particular China, Russia, Brazil, and other South American economies and Africa.

Iran has observer status at the World Trade Organization (WTO) since 2005. It applied for membership in 1996. Its membership is to a large extent blocked by the US.

Iran, is currently a small recipient of inward foreign direct investment (FDI), attracting US$3.48 billion in 2018 with a total inward stock of just US$ 57.0 billion. Due to sanctions, the attractiveness to FDI is low.

IHS Markit predicts Iran's imports in real value to increase by 4.6% in 2020 and by 3.8% in 2021. We forecast a decrease in exports real value by 7.5% in 2020 followed by an increase of 3.7% in 2021. The real GDP of Iran is forecasted to shrink by 3.8% in 2020 and to grow by 1.0% in 2021. The currently escalating crisis in relations with the US and the resulting instability in the Middle East could, however, adversely affect our forecasts. The internal and external prospects for the Iranian economy are weak in the short to medium term. 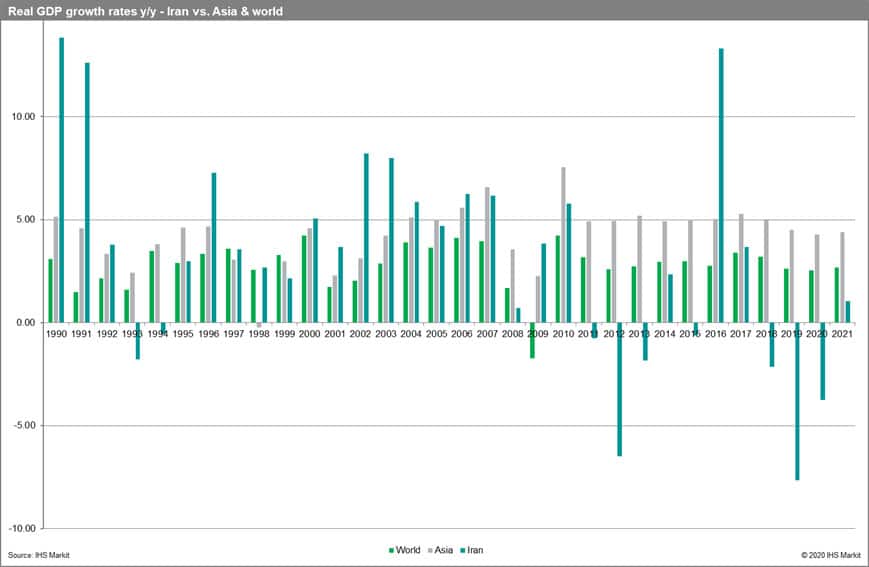 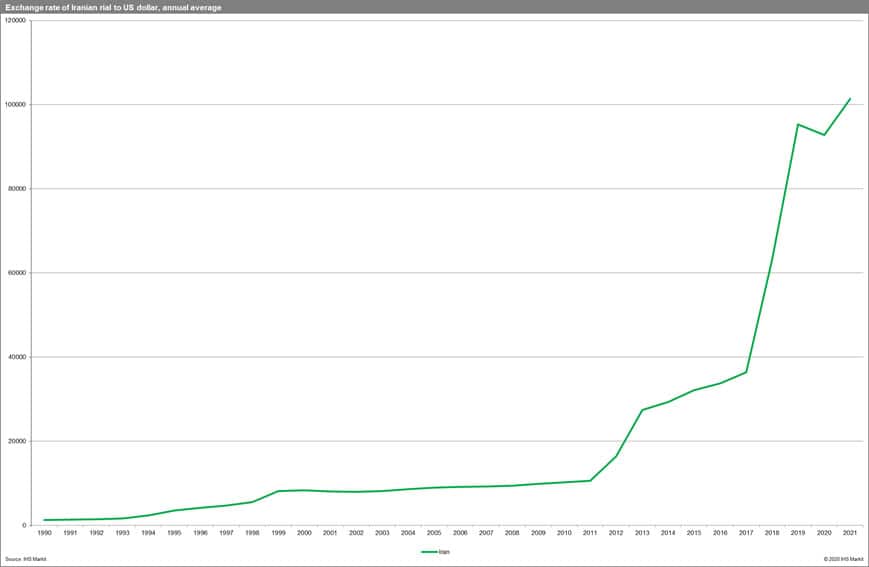 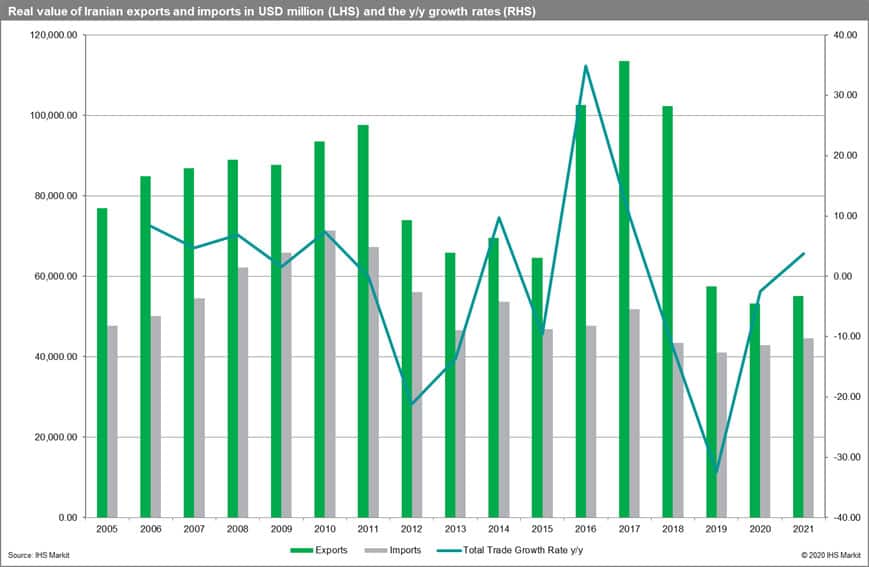 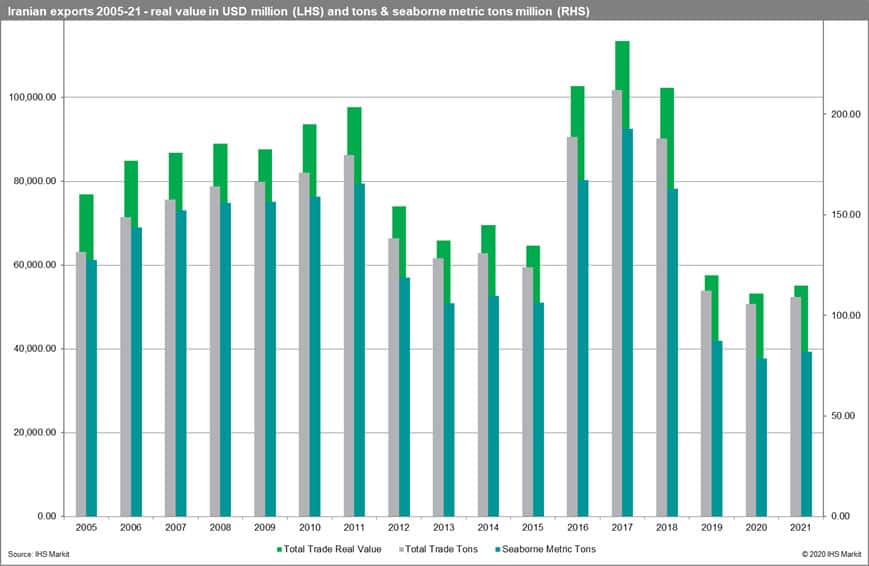 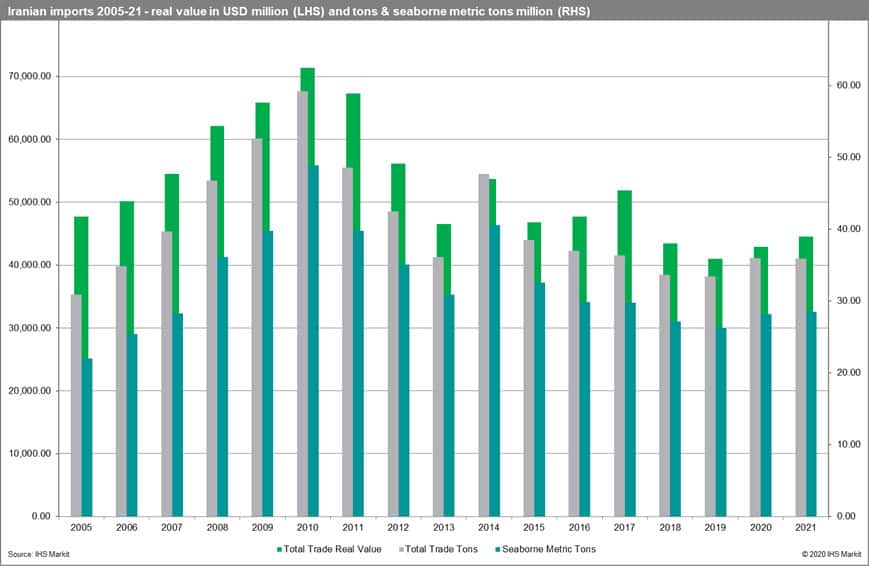 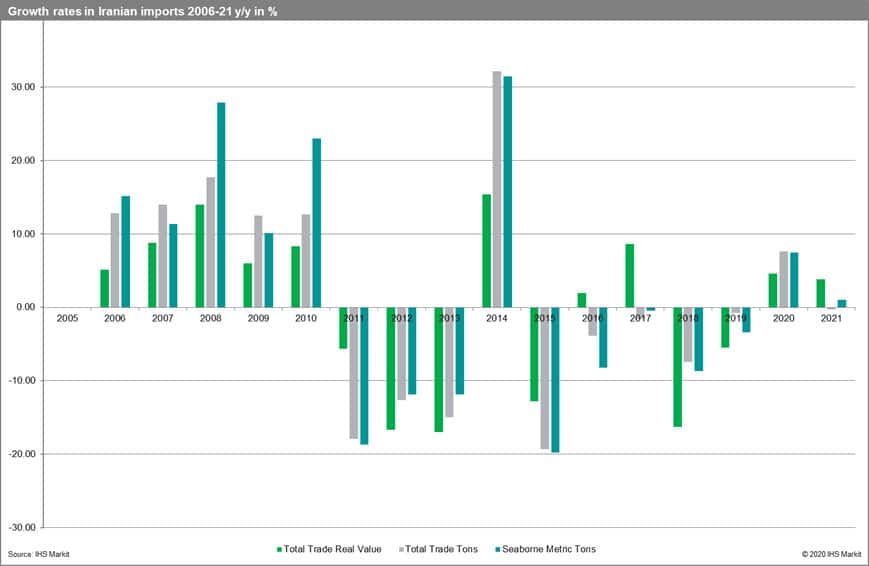