Amid higher global oil prices and a sharpening focus on new oil and gas supply sources to offset dependence on Russia, East African frontier Somalia has a renewed opportunity to attract foreign investors to its upstream hydrocarbon sector. However, in light of limited exploration success to date, the acute governance, security and infrastructure risks evident in the country may prove to be challenging hurdles for exploration and production (E&P) development. IHS Markit Petroleum Economics and Policy Solutions (PEPS) Oil & Gas Risk has recently mapped Somalia's graduated risk profile according to its established methodology, placing Somalia 107th of 119 countries and territories covered in its Oil & Gas Risk rankings.

Signs of political will and regulatory progress…

Hydrocarbon sector activity in Somalia has been limited after an initial wave of exploration activity in the 1950s and 60s resulted in five uncommercial onshore hydrocarbon discoveries. A small number of offshore shelf and deepwater exploration wells in the 1970s and 80s did not yield any results, and all exploration activity ceased after the start of the Somali civil war in 1991. Despite the establishment of an internationally supported federal government in 2012, state institutions remain fractured and weak.

However, recent developments point to increasing political will towards attracting upstream investors, most prominently via the enactment of the 2020 Petroleum Law, which included the establishment of a new regulator, the Somali Petroleum Authority (SPA), as well as the creation of the Somalia National Oil Company (SONOC).

Following the enactment of the Petroleum Law, the government launched the country's first bid round in August 2020. The deadline for the round has repeatedly been pushed back, and as of July 2022, seven offshore ultradeep blocks remain on offer. With the conclusion of the delayed presidential elections in May 2022, promotion of the bid round will likely be a near-term priority for the new president Hassan Sheikh Mohamud given the country's limited economic development.

Meanwhile, the federal government has been conducting discussions with international oil companies (IOCs) Shell and ExxonMobil to convert existing concessions - under force majeure since the start of the civil war - into production-sharing agreements (PSAs) under the 2020 Petroleum Law. In 2019, Shell-ExxonMobil paid $1.7 million in retrospective charges for the licensed blocks, followed by an agreement in early 2020 between the government and Shell-ExxonMobil on a roadmap to convert the concessions. However, as of July 2022, there have been no updates whether the IOCs intend to complete the roadmap.

Although Somalia has made progress on developing its legal and institutional hydrocarbon sector framework, there are still major challenges for foreign investors, and most immediately for the ongoing bid round. Somalia's political instability and pervasive insecurity mean that the country remains one of the least attractive nascent frontiers globally. 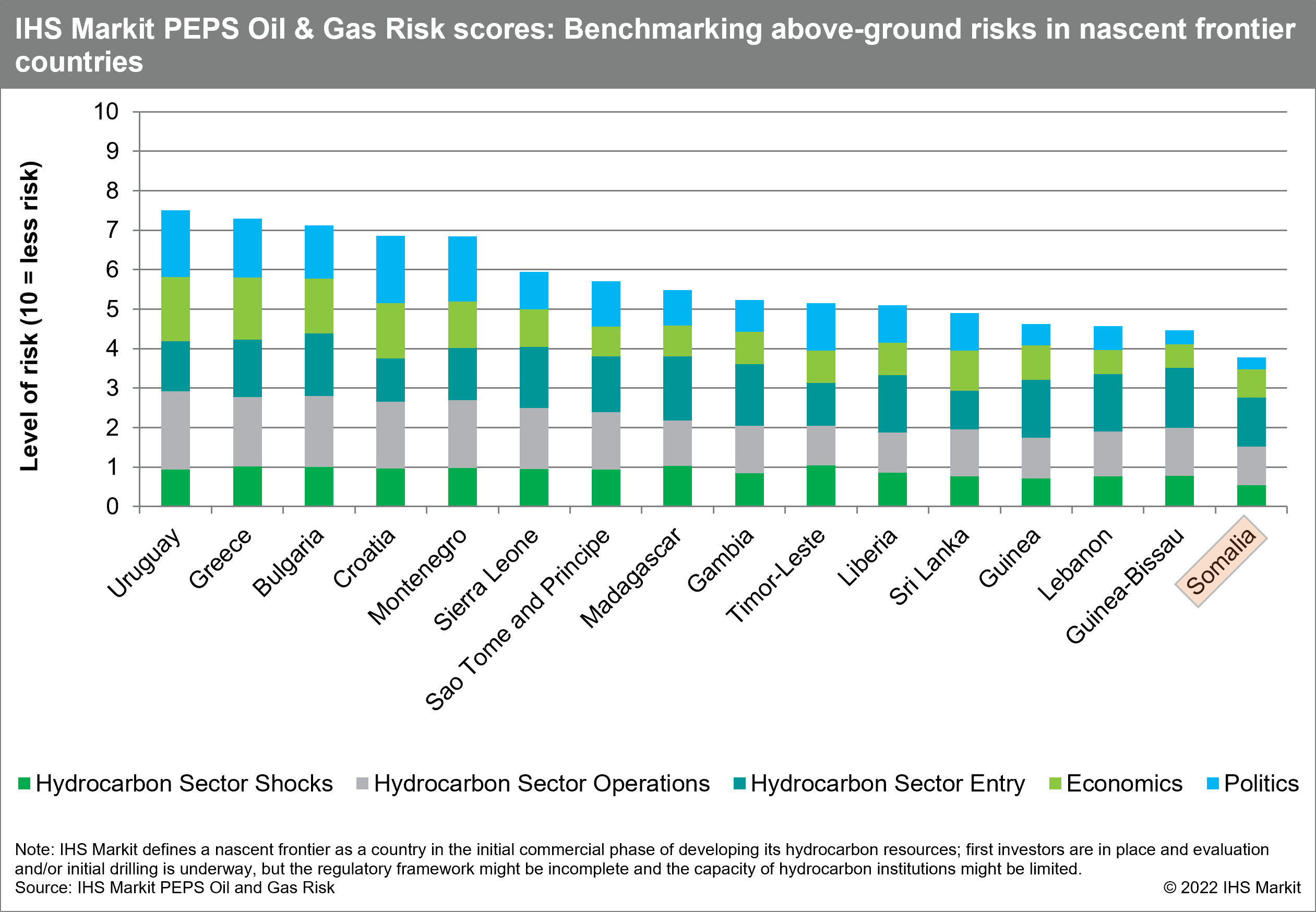 The most salient risk facing foreign upstream investors in Somalia is a lack of security. The jihadist group Harakat al-Shabaab al-Mujahideen (al-Shabaab) controls large parts of southern and central Somalia and carries out frequent attacks on military, international, and government assets and personnel. While AMISOM/ATMIS (African Union Mission to Somalia/African Union Transition Mission in Somalia) has assisted the government in containing al-Shabaab, the planned draw-down of ATMIS over the next few years and the lack of capacity within the national forces will likely lead to increased al-Shabaab presence and continued attacks, including against international staff and facilities.

Moreover, tension between the federal government and the federal states creates further instability as well as a level of regulatory unpredictability. One of the blocks in the ongoing bid round is situated offshore the federal state Jubaland, which has a longstanding contentious relationship with the federal government - including over the 2020 Petroleum Law. This will complicate any agreement on licensing terms, particularly in relation to revenue sharing and local content. In addition, the state of Somaliland has declared itself independent and established separate governance structures, including for hydrocarbon activities.

Geological surveys have indicated the potential for significant hydrocarbon deposits in the offshore blocks currently on offer. Investors may be attracted by hopes of a large liquids discovery in geological structures similar to the resource-rich albeit gas-prone Rovuma basin offshore Mozambique. However, Somalia's insecurity, political instability, and competing federal and regional interests mean that the country will likely face challenges in attracting investors with the necessary competence and capacity to explore and develop the deepwater acreage on offer. The ultra-deepwater nature of the available blocks will require considerable investment and prospective investors will also likely need to commit to contributing to the development of currently non-existent onshore hydrocarbon infrastructure.

Still, increasing regulatory maturity and the ongoing engagement with Shell and ExxonMobil are encouraging signs for further E&P activity. Sustained government efforts to ameliorate upstream investment risks will be critical to keeping Somalia's geological potential attractive to explorers with a high appetite for risk both below- and above-ground in the current transitional context.