Recently, due to the exponential progress in the robotization of the economies, the discussions on the pros and cons of technological progress started again. Modern industrial robots are present not only in industries related to transport equipment or electronic and electric equipment as before, but also in new sectors as the medical industry or logistics. Robots can diagnose cancer more effectively than humans, while drones can independently oversee factory logistic systems. The current acceleration of robotization is strictly related to the pace of progress in Artificial Intelligence (AI) in recent years. From the beginning of AI in the 1950s, nearly 340 000 invention patent applications have been filled worldwide, while more than half of them are from 2013-2019. Demand for robots doubled over the period 2010-2014 and, according to forecasts, will continue to rise in the future. The most intensive robot adopters are developed countries, such as Germany or Italy. Among developing economies, the undisputed leader is China - the World's largest importer of robots.

From the international perspective, the consequences of robotization are ambiguous. According to modern trade theory, the increase in a firm's productivity (the expected result of robotization) should lead to international expansion, positively affecting the aggregate volume of trade. On the contrary, robotization may lead to 'reshoring' - the process of production reallocation from countries with low labor costs back to developed countries. In other words, foreign workers will be replaced by domestic robots. In fact, 'reshoring' can impact international trade volume and structure and whole economies that base their growth on low labor costs. Recent evidence shows that it is already a case - robotization in some industries in the U.S. led to a decrease in exports and employment in respective plants in Mexico.

Finally, international trade can be affected directly through the productivity effect related to robotization. According to modern trade theory, exporters are the most productive firms in the economy. From this perspective, robotization can influence international trade in two ways. First, robotization, followed by the rise in productivity, can increase the number of exporters. Second, recent evidence shows that robots adopters at ex-ante are more productive than other firms. Further increase in productivity can lead to more intensive exports, in line with theory.

Taking the above into consideration, international trade can be affected by worldwide robotization in two ways - by increased productivity (positively) and by reshoring (negatively). These effects are most likely to be opposite to each other.

The intensity of the World economy's robotization and automation can be easily tracked via international trade flows, available in Global Trade Analytical Suite (hereafter GTAS) as an HS6 commodity (847950 - Industrial Robots for Multiple Uses). Over the last two decades, global trade of industrial robots increased over twice, from USD 1.7 billion in 2000 to USD 4.5 billion in 2020, reaching a maximum of USD 5.5 billion in 2018. Over the period 2000-2020, the Compound Annual Growth Rate (CAGR) equaled 4.74% in value. As depicted on the below chart, the trend is generally increasing with slight downturns related primarily to the economic crisis in 2009 and Sars-Cov-2 pandemics in 2020, typical to the World trade of majority commodities. 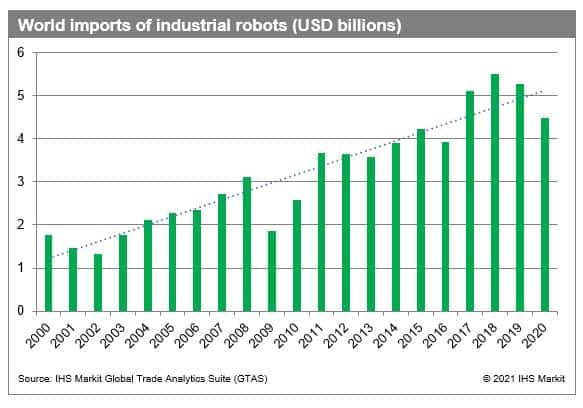 Countries the most engaged in automation are simultaneously the most significant industrial robot importers at the country level. The automation race is led by China, the only country within the group of top importers that increased imports despite the Covid-19 pandemics. According to recent GTAS data, in absolute terms, in 2020, China imported industrial robots worth over USD 1 billion, over two and half times more than the second and third countries in the ranking - the U.S. and Germany. The fourth and the fifth place is assigned to Italy and India. In general, the distribution of industrial robots' trade flows is highly concentrated within the Top 5 group, responsible for 47% of the World's total. 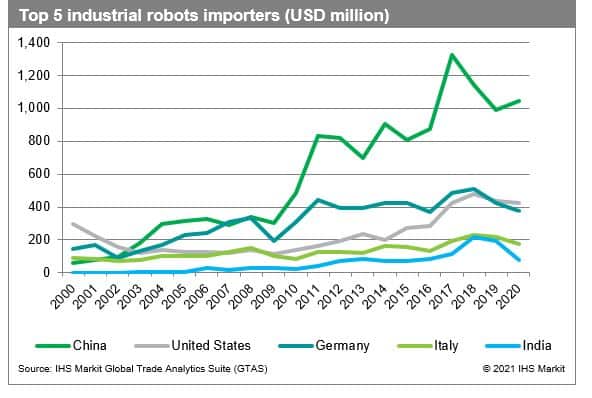 Interestingly, the most actively automating countries are at the same time the largest robot exporters. Among the top 10 exporters in 2020, China, the U.S., Germany, and Italy were present, while Japan was a clear leader with over USD 1.7 billion exports value, according to GTAS data. 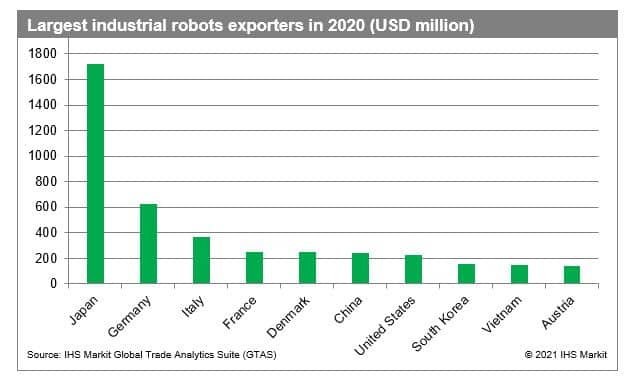 The above data allows us to draw several conclusions concerning long-term trends and expectations. Most of all, international trade is likely to be affected by robotization via two channels - plant-level productivity increase and reshoring. The changes, however, seem to be gradual and sudden trade disruptions are very unlikely. From the long-term perspective, robotization is likely to boost exports of the most intensive robot adopters (primarily developed economies) and their economic efficiency, thus strengthening their international position. On the other side of the spectrum, robotization may decrease the number of routine jobs both nationally and internationally.

On the other hand, it is also possible that robotization will affect differently specific parts of the value chains. Reshoring can accelerate trade in final goods (productivity and efficiency effects) while reducing the length of global value chains as fewer production stages will have to be offshored.

Economies can adopt two strategies to address the issue of World robotization: try to climb in GVCs, especially in terms of irreplaceable services by robots, or join the robotization race. The earlier seem to be adopted in India or Central European economies such as Poland or Hungary. The latter is a choice of China - the most significant current industrial robot importer. From this perspective, fast robotization can reduce the risk of offshoring and enhance the Chinese export base.

To sum up, after a few years from the onset of the AI revolution, its impact on international trade is still uncertain. However, some of the above scenarios are more likely than others. At least, for now, it is clear that robots will affect global trade, promoting the expansion of some economies while inhibiting others.

Graetz, G., & Michaels, G. (2015). Robots at work: the impact on productivity and jobs. CentrePiece - The Magazine for Economic Performance 447.

RT @IAPHWorldPorts: Using 1.3 billion vessel moves over the last 5 years. The Container Port Performance Index one year on: @WorldBank and…