Gas development and utilization in Nigeria have been highly influenced by the various reforms to the country's petroleum investment and regulatory framework over the past 50 years. One of the state's main aims with the newly-enacted Petroleum Industry Act, 2021 (PIA) is to facilitate the development of more gas for commercialization within Nigeria. As such, the PIA introduces more detailed regulations and terms for the mid- and downstream segments of the gas value chain, domestic gas delivery obligations, and above all, a midstream gas infrastructure fund financed from a new 0.5% levy on all gas and refined product purchases by wholesale customers. The government believes that these measures will help to boost investment in new gas spur lines, gas-to-power capacity and gas-based industrial clusters and will complement the strategic gas infrastructure projects that are already under way such as the Obiafu-Obrikom-Oben (OB3) pipeline, which nearing completion, and Ajaokuta-Kaduna-Kano (AKK) pipeline, the first phase of which is under construction. Together, the OB3 and AKK pipelines will form a transmission backbone that will connect the gas production areas in the Southern and South Eastern parts of Nigeria to the population centers in the South Western (Lagos), Central (Abuja) and Northern (Kano) parts of the country. 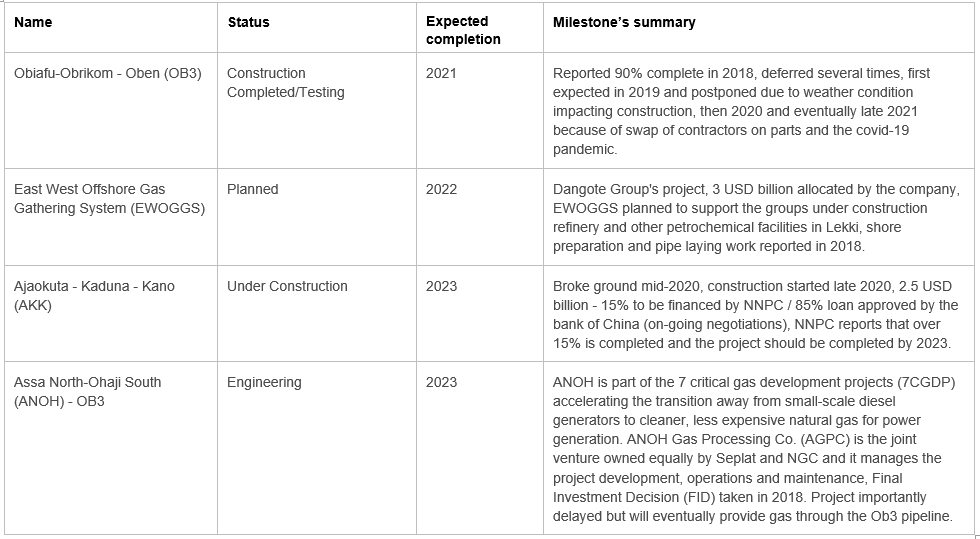 From the start of oil and gas exploration in Nigeria until the 1980s, natural gas was considered only as a by-product of the oil production process. Moreover, the Associated Gas Re-Injection Act of 1979-1980, and its amended provision in 1985, allowed gas flaring. Therefore, the development of gas infrastructure and gas-fired projects for power generation and industrial purposes in the 1960-1970's was limited to few plants and private industries in the Eastern region close to the gas source.

From the 1980s onwards, the Government initiated several projects to increase both commercialization and utilization of gas for the domestic market which resulted in the construction of gas transport infrastructure linking the different regions of the country. Mid 1980's, gas pipeline systems started to supply major industries and thermal power plants in the Eastern region. In 1989, the commissioning of the Escravos - Lagos pipeline (ELPS) was a major step forward in the Government's gas utilization scheme as it allowed, for the first time, to supply gas to the densely populated Lagos area in the West where demand and consumption were centered and growing.

In the 2000s, the implementation by the Government of various gas utilization schemes, regulatory frameworks, and economic incentives to reduce gas flaring and attract investments has boosted the development of gas infrastructure to meet the growing demand for gas of both the power and industrial sectors in the western and northern regions. While gas demand and corresponding incentives have been steadily increasing for several decades, the government hopes that the PIA will shape the landscape to an unprecedented level by creating an enabling environment for new investments in gas development and domestic commercialization to harness Nigeria's large untapped gas resource base.