Will market volatility in Romania spill into real economy?

At the end of 2018 Romanian government has announced that Romania is raising sectoral taxes to finance higher public-sector wages and social transfers. Meanwhile, the pension system takes a further hit through lower administration fees and by allowing individuals to opt out. The market reacted with a sharp drop in equity prices, a sliding exchange rate, and rising bond yields. Several of the latest government bond auctions were also indicative of deteriorating investor sentiment. The government was not able to borrow as much as planned, as yields went up and investors showed less interest in Romanian sovereign bonds. 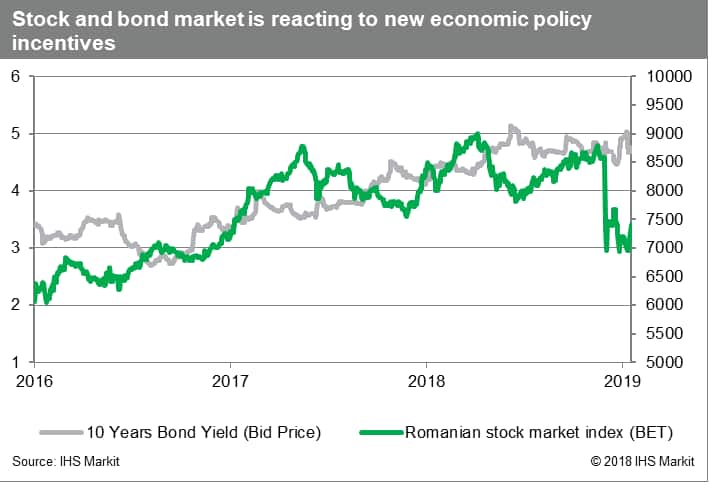 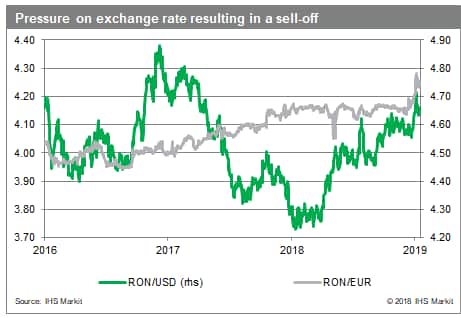 Current policy direction is likely to exacerbate the external imbalances of the economy. Romanian economic growth has already been fueled mainly by rising consumption as a result of expansionary fiscal policy. As policy makers are trying to keep budget balance within 3% of GDP, public investments suffer and poor infrastructure continue to limit economic growth potential as a result. Moreover, sudden changes in taxes in particular and worsening investment climate in general will put a lid on private investments as well. Moreover, taxes on bank assets are likely to lower lending volumes further limiting some of potential investments or forcing to turn to external lending. Without adequate private and public investments country will not be able to lift productivity and rising unit labor costs will weaken its export competitiveness impeding the ability to turn to more balanced and sustainable growth path in the future. Weakening external environment, as growth in Europe leveling off, are adding up to the challenges that Romanian economy will be facing in the future.

New taxes and weakening of the pension system are also negative for capital market development in Romania. Although the value of pension funds' assets might not be huge compared with some other countries, the local capital market is also quite small. The value of turnover on the Bucharest stock exchange last year was equal to 1% of GDP. Moreover, only a few sectors, such as energy and banking - which are likely to be hurt by new taxes and regulations - are providing adequate liquidity. Banking sector and pension funds are also significant investors in government bonds.

Lastly, taxes on bank assets, might limit monetary policy effectiveness and flexibility. Central bank was able to bring down elevated levels of inflation in the past. However, the concerns were growing that monetary policy alone will not be able to ensure balanced growth without more adequate fiscal policy and structural reforms. Now the risk of possibly constrained monetary policy are adding up to those concerns.

It is obvious that in the short term further increase in pensions and public sector wages will contribute to purchasing power growth, especially if lower commodity prices will not enable inflation to come back to unsustainably high levels. It is also true that Romania has a relatively low public debt, and budget and current account deficit is below levels seen before global financial crisis. Meanwhile, the banking sector has high liquidity and capital adequacy, and decreasing levels of NPLs limiting the risks to the stability of the banking system. However, the proposed measures in total are likely to provide only a short-term boost for consumption and budget revenues - most likely below the expectations of policy-makers - at the expense of medium- and long-term growth potential and revenues.

IHS Markit expects Romanian economic growth to decelerate close to 3% in 2019 after surpassing 4% growth last year. The economy will continue to be flying with only one engine on, as investments and exports will be facing stronger headwinds. Such a journey, especially with a reckless pilot, can result in a bumpy ride if the country is lucky and a crash if stars do not align. This is why we acknowledge the rising risk of economic growth coming to a sudden stop as Romania's ability to weather external shocks is decreasing.