The Permian basin has been grabbing headlines for the past few years, as operators have rejuvenated the area by exploited its massive resources of shale and tight oil. Indeed, the performance has been impressive:

This explosive growth justifiably created the notion that the Permian will continue its meteoric ascent and dominate global markets. Yet a careful look "under-neath the hood" shows a system with important constraints that make the region vulnerable to lower oil prices than headlines suggest.

To understand how low prices can impact the play, it is helpful to break down the system into the two parts that determine oil output.

Base Decline
Simply put, for any given year, base decline equals the volumetric decline from January to December for all wells brought onstream before the first of the year. As shown in Figure 1, that figure was slightly over 110 million barrels per day (mb/d) for the Permian in 2013. This decline was very shallow because the base of historical wells was composed of older wells on the flat part of their decline. In the Permian, extensive enhanced oil recovery operations (waterfloods and CO2 floods, for example) have low output per well, but do not decline rapidly. 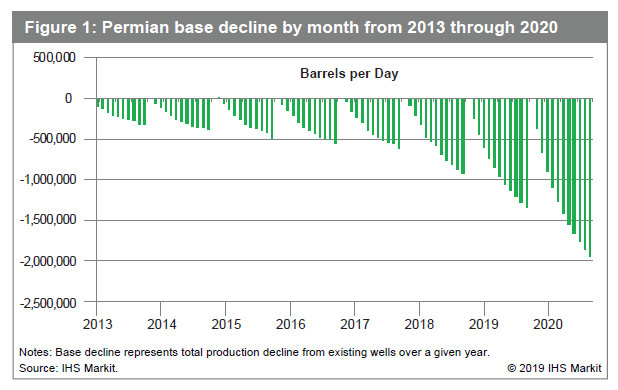 Today, the situation has changed dramatically mostly due to shale. Individual shale wells deliver very high production immediately, but they decline from this peak by 65% to 75% in the first year. Being hyperbolic, that first-year decline rate becomes increasingly shallow over time. Thus, growth in output via shale from 2013 to 2016 was relatively easy, since it involved adding high initial-rate wells on top of a slowly declining, conventional base.

However, now that shales are dominating the base of production, the "treadmill" has accelerated dramatically. We expect base decline in 2020 to be almost 2,000 mb/d - nearly 20 times the 2013 figure. Importantly, base declines in any year are largely fixed and predictable.

Wedge Volumes
The second part of production is the output from new wells that operators bring onstream over the course of the year - the "wedge." The equation is simple: if wedge volume exceeds base decline, output grows. If operators cannot match the decline, output falls.

A myriad of factors influences the extent of wedge volumes. Think of it this way: wedge volumes equal the amount of capital invested in new wells multiplied by capital productivity (the average production generated by each dollar spent).

In the Permian, capital efficiency rose dramatically between 2013 and 2017. This explains why operators were able to compensate for falling capital investment levels in 2015 and 2016 to maintain production. the Permian was able to remain resilient despite dropping level of investment.

All of these factors are real, but a look at the current data, however, shows that the impact of each factor has diminished or stopped. This is a natural part of the maturation process for a basin and is to be expected. In fact, in some cases, such as oilfield service pricing, 2018 experienced a reversal of gains as modest inflation took hold.

Thus, unless a new technology or technique emerges, Permian productivity has likely moved from a period of breakthrough gains from 2014 to 2017 to very incremental gains. Economics are world-beating, but they are not likely to improve.

As a result, wedge volume is therefore highly dependent on the sheer amount of capital invested in new wells. More capital drives high growth and less capital reduces near-term growth. This stands in contrast to much of the conventional oil industry where capital investments do not impact production for many years due to long leads times.

Two factors determine the amount of capital that will companies will invest:

In the past two years, however, equity markets demonstrated less tolerance for adding debt or equity to fund growth. Instead, they are demanding that companies live within cash flow - or even return cash to shareholders. This is an important change in thinking about the growth of the Permian: each dollar returned to shareholders is not invested into a new well, eroding wedge volumes and reducing growth.

With lower prices and increased demand for reinvestment restraint combined with the rising base decline rate, it's clear why low prices are likely to succeed in blunting the momentum of the Permian. Although the region boasts extremely high capital efficiency and the ability to attract external capital despite lower oil prices, a downshift to a lower gear seems inevitable in 2019.
We also can draw lessons about the longer-term performance of the system. Low prices definitely have an impact, but not because they make individual wells uneconomical. Rather, low prices limit the total capital available for reinvestment by reducing budgets. Volatility may compound the problem by encouraging companies to budget conservatively (no one likes to retrench on spending or growth plans).

These undrilled wells remain in inventory, however, ready to come online whenever capital becomes available. This deep inventory of locations offers companies riskless flexibility and optionality. Sooner or later, they are likely to contribute to supply and may drive growth surges such as that seen in 2018.

As the market understands how the shale asset functions, this ability of the Permian (and US shale in general) to respond quickly to oil price changes may lead to reduced oil price volatility, as supply relieves tightening markets and vice versa. It is only when the inventory of the most productive acreage exhausts itself - after 2025, in our view - that the Permian encounters structural obstacles to growth.

RT @spencercwelch: As we enter June, #oil market at critical inflection point with demand edging back above supply, we might even see small…

If #oil demand recovers back to pre-coronavirus (COVID-19) levels, the running of the bulls will be vindicated. In… https://t.co/0vS34dOFLu

#Airtravel is incompatible with the rules of “social distancing”, as a result, #IHSMarkit expects global jet fuel d… https://t.co/YejHziOaLp