Will consumers spend a chunk of the accumulated excess saving, sparking an inflationary boom?

The US economy suffered an unprecedented decline in early 2020, precipitated by the emergence of the COVID-19 pandemic and the efforts to control it. Consumer spending led the decline as socially dense consumer activities were sharply curtailed. Although employment and wage income plunged, massive income support in the form of stimulus checks to individuals, expanded unemployment benefits, and support to businesses more than offset the declines in personal income—to the point that personal income jumped even as the economy slipped into recession. The one-time nature of much of the income support to individuals meant that the propensity to spend it was relatively low, and the personal saving rate (percent of after-tax income that is saved) shot up. As incomes remained strong while spending was restrained, households accumulated some $1.8 trillion of extra saving. The extent and speed with which consumers spend this accumulated excess saving will be an important determinant of consumer spending as restrictions are lifted. Some worry that a quick spend down of that accumulated excess saving, along with other stimulus, could fuel an economic boom accompanied by an inflationary spiral. We don't see it that way.

The CARES Act (2020), the Consolidated Appropriations Act (2020), and the American Rescue Plan (ARP, 2021) together heaped hundreds of billions of dollars of direct payments and more generous unemployment benefits on US households from March 2020 through March 2021. Most of that largess was saved. In April of last year—when most of the Cares Act stimulus payments hit household bank accounts—the personal saving rate soared from around 8.0%, averaged over January and February, to 33.7%. The saving rate declined from there as the flow of stimulus payments waned but remained elevated relative to its pre-pandemic level as a result of a persistent pullback in certain components of spending. The monthly profile of spending, disposable income and the saving rate through February 2021 is shown in Figure 1. 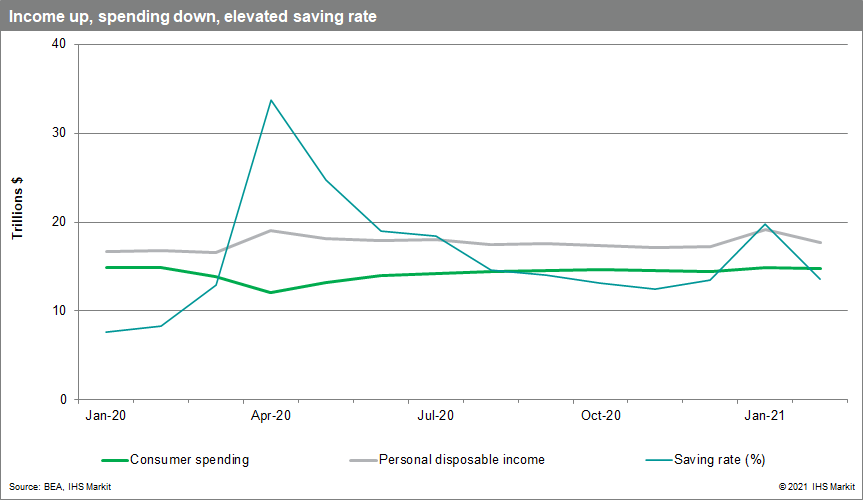 The saving rate spiked after this first round of payments and remained elevated relative to its pre-pandemic level partly because consumers typically save a very large portion of one-time (as opposed to recurring) payments and partly because there were fewer places to spend—both due to the voluntary retreat from spending activities requiring close social contact and due to government-imposed restrictions. Thus, a mountain of "excess savings" resulted from the elevated saving rate, fueled by both the stimulus cash and regular income not spent. Over the past year, this excess saving has accumulated to roughly $1.8 trillion. The monthly profile of the excess saving and its accumulation is shown in Figure 2. 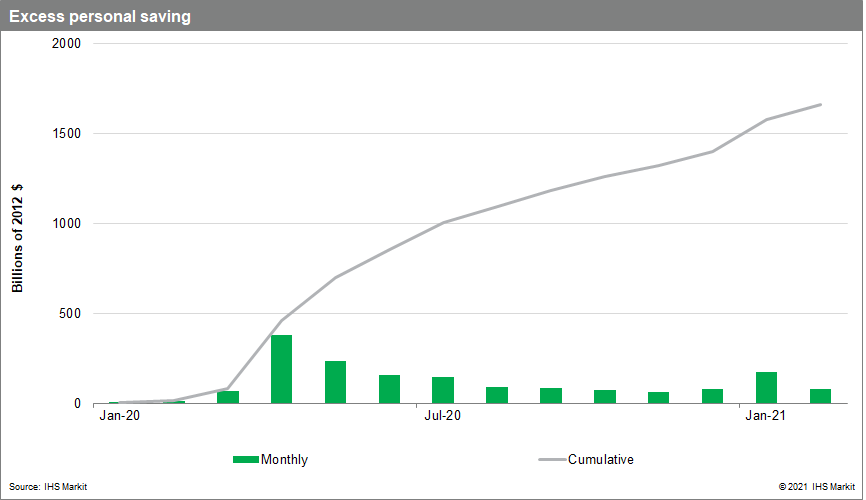 The sheer volume of the spending authorized in the ARP, combined with its timing—much of it slated to arrive when we anticipate the COVID-19 pandemic will have been contained—has raised concern in some quarters: analysts including noted economists Larry Summers and Olivier Blanchard warn that it could stimulate so much demand as to spark an economic boom accompanied by an inflationary spiral. By our estimates, such a boom would imply an undershoot of the saving rate.

We do not expect such an undershoot, and project the saving rate to remain above 8.0% through 2022. That is, we do not expect consumers to go out and attempt to quickly spend down a portion of the accumulated excess saving. Instead we are forecasting a "gradual" return toward the pre-pandemic relationship between consumer spending, income, and wealth. Although there could be enough splurging behavior to lower the saving rate below our projection, we do not expect this, but view it as a source of upside risk to our forecast of consumer spending. One reason is the theory—which is supported by empirical evidence—that consumers prefer smooth consumption patterns. The purchase of a consumer durable that yields a flow of services over time, such as a TV or SUV, is actually a way to smooth the consumption of services over the long run, even though it causes expenditures to temporarily jump. The elevated levels of expenditures on consumer durables during the pandemic will therefore lower the pent-up demand for services waiting to be released.

More broadly, theory and evidence suggest that wealth (as opposed to income) is spent slowly over time; the annual amount spent out of an additional dollar of wealth—referred to as the marginal propensity to consume out of wealth, or MPC—is estimated to be between $0.05 and $0.10. More recently, post-Great Recession numbers seem to lean to the bottom end of this range—or even lower. This suggests that there will be no great spending surge attributable to the accumulated excess savings. Nevertheless, using an MPC as high as $0.075 would only add about $135 billion to consumer spending this year. On a base of $14.5 trillion of consumer expenditures, it would raise the growth of consumer spending about 0.9% in 2021. Hardly the makings of a boom.

Observation of history also supports the notion that the saving rate is unlikely to sharply undershoot its pre-pandemic value. Consider the experience around World War II. During the war, the saving rate spiked as production and purchases of consumer goods and spending on leisure services were curtailed. At the conclusion of the war, despite the release of pent-up demand as returning service members married and started families, the saving rate declined to a level above its pre-war average and then trended higher for several years. Our forecast features a broadly similar result. The return of the normal relationship between spending, income, and wealth does not imply an undershoot of the saving rate. Without such an undershoot, the path of consumer spending, while strong, does not launch the economy into an inflationary boom. 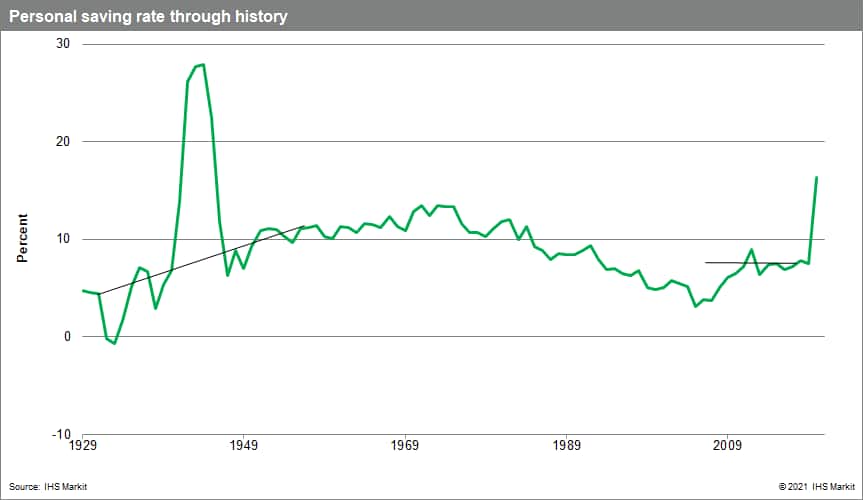 We assume that consumer expenditures will rise toward the level implied by the normal relationship between consumer spending, income, and wealth at a pace determined mainly by the current vaccination campaign and course of the pandemic. Further, we expect that by the end of the summer, enough Americans will have been inoculated and the pandemic sufficiently controlled for the majority to feel free to return to something like their pre-pandemic lifestyles and to engage again in socially dense activities. The recovery in consumer spending this would trigger is much faster than the average historical response of consumption to shocks. We expect consumer expenditures to rise more than 7% (4th-quarter over 4th quarter) in 2021. Spending on non-housing, non-health care services is expected to grow faster than 15% this year. That occurs with the saving rate ending 2021 at around 8%, down from its February level of 13.6%. That very strong pace of consumer spending is consistent with our baseline forecast that GDP will grow 6.6% (4th-quarter over 4th-quarter) this year and that the unemployment rate will decline to average 4.3% by the fourth quarter. This constitutes a very solid recovery, but not the start of an inflationary boom.

Expect a robust recovery in consumer spending this year, centered in spending on consumer services. That recovery will not require households to spend down much, if any, of the excess saving accumulated over the past year, but will occur as consumers return to their pre-pandemic spending habits, which will roughly align with the normal relationship between spending, income, and wealth.