Wildfires: Impact on the Australian and Californian agricultural industries

Uncontrolled fires are frequently taking place in warm and dry areas such as Australia, California and Mediterranean countries in summer. These countries have developed special programmes to reduce their impact on the farming industries and environment. However, wildfires have become a real danger for their economics, also hitting their agricultural industries. Australia and California, both key agricultural suppliers in both hemispheres, have suffered the worst of all worlds between 2019 and 2020: rising costs due to Covid-19 restrictions and fires and smoke hitting farms.

Australian wildfires took place between September 2019 and March 2020, before the start of the southern hemisphere summer. The 2019-20 bushfire season hit 18.6 million hectares, a record, agricultural soil taking for 13-14% of the total area. Rainfall cut the bushfire risk from March onwards and winter crops (wheat, barley, canola and chickpeas, mainly) developed as usual.

IHS Markit expects the Australian economy to contract by 4.9% in 2020 due to the combination of severe drought, bushfires and Covid-19 outbreaks. The 2020-21 agricultural volumes are expected to rebound. However, weak consumption and prices may offset this rise, the net revenue being stagnant at AUD61 billion (USD44.4 bln), due to the economic crisis caused by the Covid-19 outbreak. The federal government forecasts that the farming industry will resume rising sales in the 2024-25 season.

The Australian Insurance Council estimated that bushfire losses were around AUD1.9 bln in insured claims. The industry has been suffering the worst of all words because bushfires confluence with Covid-19 restrictions from March onwards. The farm production value is expected to fall by 4.8% year-on-year to AUD58 bln, according to the federal government.

As a result, the federal government announced the formation of a National Bushfire Recovery Agency to coordinate the reconstruction works. The programme's resources initially totalled more than AUD2.0 bln, having spent AUD1.6 bln until October 2020. Agricultural growing and processing recovery projects may receive around AUD270.1 mln, assessed by local authorities on behalf of the federal government.

The most affected agricultural industries were: 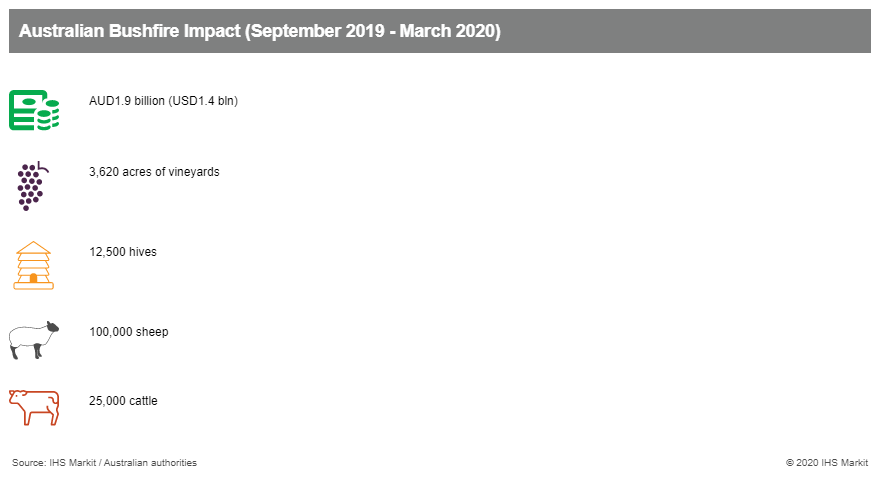 The 2020 Californian wildfire season burned 1.7 mln hectares until 24 October 2020, a record. As a result, some experts are calling this fire season a 'gigafire'; a new word to enlarge a classification was above the existing 'megafire'. The 2018 fire season brought a total expense of USD2.3 bln and the 2020 season is expected to exceed this record.

Smoke has been covering most space between Central Valley and the coast, cutting sunlight and lifting average temperatures. Fires have also destroyed irrigation infrastructure and have increased harvesting costs as farmers had to use special masks due to smoke after assuming PPEs as a result of Covid-19 restrictions. In addition, some products require clear skies and warm temperatures to complete their production cycles successfully.

The University of California listed the following negative impacts of smoke on crops:

Fires and their consequences are under the umbrella of the  USDA's disaster assistance programs.

As a result, products whose harvesting takes place between July and October may be the most affected.

Federal government led by the president Donald Trump considered that wildfires were the result, mainly, of uncleaned forests and human intervention. As a result, its administration planned to develop an ambitious programme to prevent forest fires. Meanwhile, the Democratic Party proposed a more holistic approach, considering the rising impact of fires a consequence of climate change combined with human action. As a result, IHS Markit will follow initiatives and recovery projects launched by the Californian and federal governments in 2021, both supported by the Democratic Party.

Summer wildfires are common in warm and dry regions, such as California, Australia, Spain and Portugal, hitting their farm industries. Latest bushfires have been especially damaging in California and Australia, the global agricultural industry keeping an eye on their consequences. The recovery projects developed by governments will be essential to understand how new plantation projects are developing in both areas. Their federal government policies will drive how farmers and rural population are reacting in the mid and long-term, as they did to shape their current key industries.