The close connections between the Czech and German manufacturing sectors mean that expansions or contractions in the eurozone's largest economy are often reflected in the performance of the former, and 2018 is proving to be a case in point. Although starting the year in fine health, the wellbeing of the Czech goods producing sector has taken a turn for the worse in the latter stages of 2018, reflecting the difficulties faced in one of Germany's most influential industry - automotives. 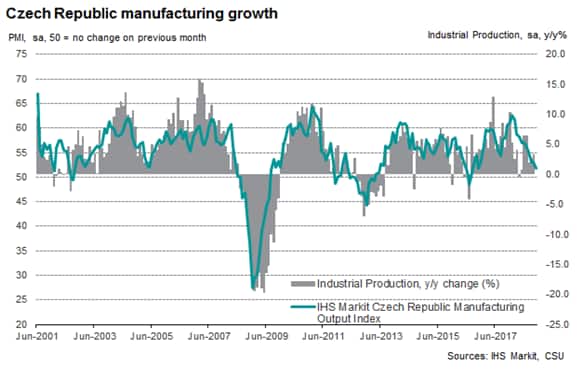 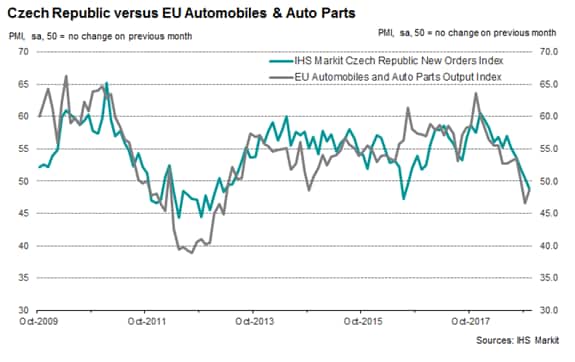 November data from both the IHS Markit Czech Manufacturing PMI and Business Outlook Survey highlight weaker confidence among goods producers towards future output, stemming to a large degree from a slowdown in the wider automotive sector. Although many have drawn attention to the impact of recent changes in emissions testing as a cause of weaker economic growth in 2018, it is important to note that slower demand growth and further emissions regulations could weigh on production going into 2019.

The emergence of recent official data spelling out troubles in the autos sector since the introduction of the WLTP (World Harmonised Light Vehicle Test Procedures) have shown the short-term impact that new emissions regulations can have on production processes. Evidence of this was seen in a 9.9% fall year-on-year in German passenger car registrations in November. However, issues in the sector stem from both the demand and supply side. As a key contributor to the European automobile sector supply chain, the Czech manufacturing sector can be seen as a litmus test for the wider industry's health.

Damage to global trade ties and ongoing uncertainty towards tariffs (both between the US and China and the US and the EU) have led to subdued production forecasts for automotives in 2019. IHS Markit currently expects output growth of 1.0% in the European automobile industry next year. Weaker client demand in China and Turkey are notable factors weighing on the output outlook; however, the effects of the introduction of new emissions standards in China (China VI Standard) in mid-2020 may also become apparent as companies adapt business processes through 2019 ready for changes in such a dominant market. 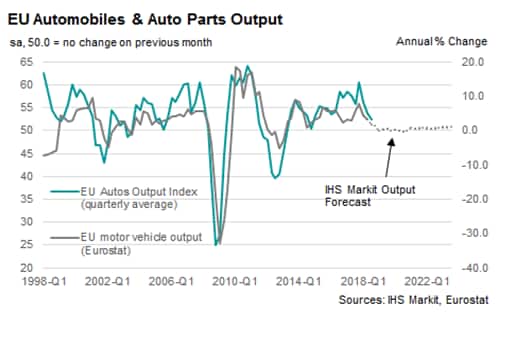 Changes in investor sentiment have also reflected the greater uncertainty towards future production growth. The year-on-year change in the Euro Stoxx 600 autos index saw the fastest fall since June 2016 in November, following multiple announcements relating to temporary shutdowns and lower production volumes. Czech manufacturers also mirrored this gloomier trend, with the degree of business optimism dropping to an almost six-year low, according to November PMI data. This came on the back of the fastest fall in new business from abroad since December 2012 and first decline in new orders since August 2016. 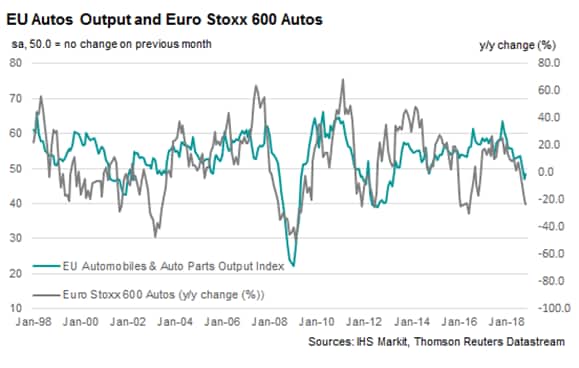 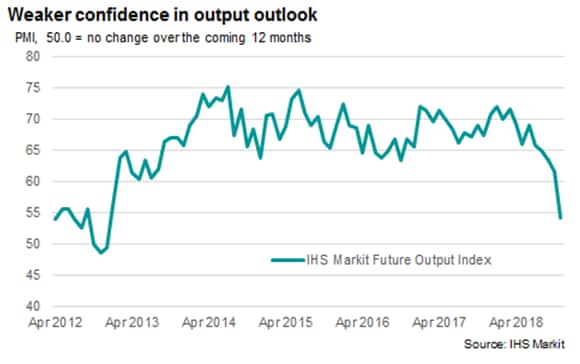 With just over 30% of all exports from the Czech Republic going to Germany, and around 20% of total exports between January and October 2018 comprising road vehicles alone*, it is unsurprising that Czech manufacturers commonly attribute changes in demand and confidence to the health of the automotive sector.

Anecdotal evidence stating an overheating autos industry exhibiting signs of slower demand began to filter through in the Czech Manufacturing Outlook Survey conducted back in February. Survey panellists have since become more concerned of the effect on future output growth, with the recent emissions regulations bringing these fears to the fore. The most concerning insight from the November PMI responses related to further unplanned shutdowns in the New Year.

The near-term outlook for the Czech manufacturing sector suggests a further weakening in output growth, as the hangover from emissions test changes is prolonged, reflected in a tumble in business confidence.

Although the difficulties experienced by manufacturers due to regulation changes are expected to filter out of official data through the start of 2019, the impact of weaker demand is likely to remain. Uncertainties across the global market with relation to trade, including the outcome of Brexit and US tariff wars, are providing headaches for governments and forecasters alike. Nonetheless, current IHS Markit forecasts signal year-on-year real GDP growth of 3.1% in 2019, easing to 2.7% in 2020.