Widespread contraction in eurozone productivity at start of fourth quarter

Eurozone productivity deteriorated for the seventh straight month in October as ongoing declines in Italy and Germany were accompanied by a renewed contraction in France. The quickest fall was evident in Germany's private sector, followed by Italy and France respectively. Eurozone manufacturers continued to record faster decreases in output per head than service providers, despite producers in France bucking the general trend and being the only firms to record growth (on average). Offsetting the latter was the sharpest worsening of labour efficiency in Germany's manufacturing industry for nearly six-and-a-half years. 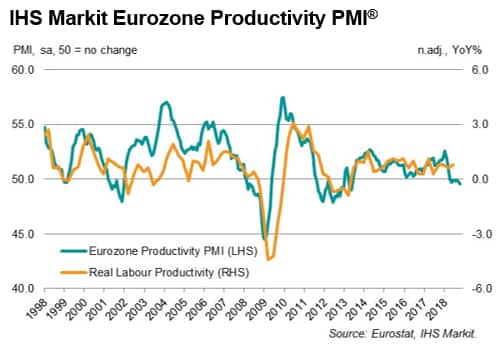 At 49.6 in October, the seasonally adjusted Eurozone Productivity PMI® - derived from IHS Markit's national manufacturing and services PMI survey data - signalled a marginal deterioration in workforce efficiency. However, falling from 49.8 in September, the latest figure was the lowest seen since May 2013. The contractions in output per head across the manufacturing and service sectors accelerated to the quickest in three and 27 months respectively, but the former remained the worst performer.

Workforce efficiency in Germany worsened to the greatest extent since mid-year. In the service economy, the fall in output per head was marginal and softened from September. Conversely, manufacturers noted a solid drop in productivity, one that was the most pronounced since July 2012. Goods producers continued to lift employment markedly, though job creation was at a 20-month low. At the same time, the latest rise in production was marginal and the slowest in close to four years.

October data showed the first contraction in productivity across France for three months, albeit one that was marginal as a renewed deterioration in labour performance in the service sector was partly offset by sustained improvements at goods producers. Of the 'big-three' eurozone nations, aggregate productivity in France worsened to the least extent.

Labour performance in Italy's service sector was unchanged from September, thereby ending a four-month sequence of improvements. Conversely, manufacturers noted a fifth successive contraction in output per head. Although marginal, the fall across the private sector was the fastest in over two years. Aggregate employment rose further, while business activity decreased for the first time since the end of 2014.