Mainland China's zero-Covid policy is increasingly unsuitable to contain the much more infectious new coronavirus disease 2019 (COVID-19) variants, yet is likely to remain unchanged this year.

The policy has exacted heavy tolls on the economy, as containing outbreaks of the new variants requires extreme restrictions, including citywide lockdowns. Zero-covid policy lockdowns in the spring of 2022 caused disruptions to the Chinese economy not seen since the severe economic contraction in the first quarter of 2020 owing to the initial Covid outbreak in Wuhan.

Stringent lockdown measures could continue to be the "tool of last resort" for a dynamically COVID-19-free environment throughout 2022. Near-term dependence on the "test and lockdown" approach would at least help authorities to mitigate risks of a healthcare crisis beyond what they are able to control.

The strict pandemic responses - also supported by unparalleled public obedience - have helped keep the domestic COVID-19 infection count at extremely low levels and reduced disruptions to healthcare service provisions unrelated to the pandemic. An abrupt relaxation of the current policy would risk breaking the balance between COVID-19 and non-COVID-19 healthcare needs and overstretching the underdeveloped healthcare system.

By the end of 2020, mainland China's number of practicing physicians reached 2.9 per thousand people compared with 2.6 in the United States, and 4.4 for the OECD country average. The shortage of nurses appeared more concerning, as China's number of nurses per thousand population was reported at 3.34 - far below the US level of 12.0 and the OECD country average of 8.8.

China appeared better positioned in terms of medical infrastructure, with 6.46 beds at healthcare institutions per thousand people - higher than the level of 2.8 beds in the US, and the OECD country average of 4.4 beds.

The healthcare systems across the regions have a "physician-hospital bed mismatch" issue - regions with a higher physician count per thousand people may have insufficient hospital beds, and vice versa.

More developed areas like the northern coastal region (Beijing, Tianjin, and Hebei) and the eastern coastal region (Shanghai, Jiangsu, and Zhejiang) have an above-national-average number of physicians per thousand people, yet their hospital density is falling behind.

Less developed regions like the southwest (Sichuan, Chongqing, Guizhou, Yunnan, and Guangxi) and Midstream Yangtze River (Hunan, Hubei, Anhui, and Jiangxi) on the contrary have more hospital beds per thousand people than the national average but fewer physicians.

Uneven regional distribution of people 65 and older is another concern. The three northeastern provinces (Liaoning, Jilin, and Heilongjiang) have both above-national-average numbers of physicians and hospital beds per thousand people. They also have an older population - the share of those aged 65 and above among the local population is 2.9 percentage points higher than the national average. This is likely to cause relatively greater stress on healthcare resources amid any significant COVID-19 resurgence. 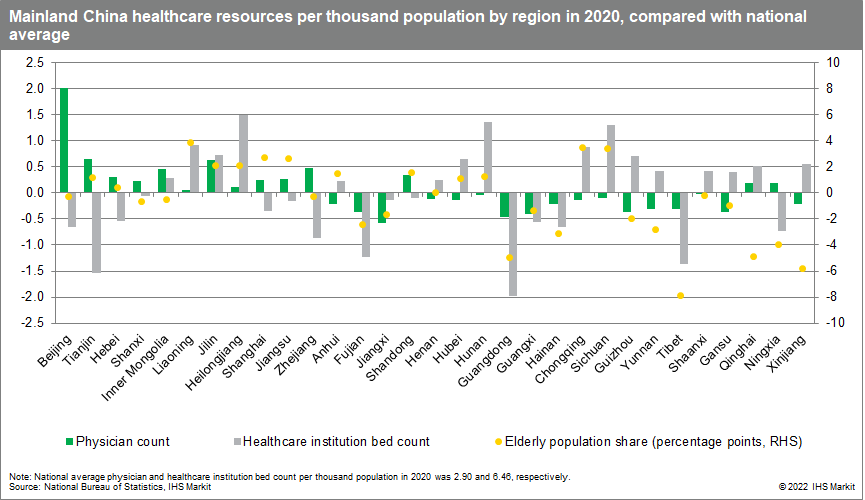 Vaccination is particularly crucial for China, because the country's extremely low Covid-19 infection rate indicates the absence of natural immunity.

China has achieved a full vaccination rate of nearly 90% and a booster shot coverage of approximately 55% among the entire population. Vaccination progress among the elderly lags other age groups, with hesitancy partially coming from underlying health conditions, concerns over potential side effects, and the lack of urgency owing to China's early containment successes.

The latest release from China's National Health Commission suggests that the fully vaccinated share of the population has reached 82.7% for people aged over 60 years, and only just exceeds 50% for those aged over 80.

At the regional level, reports on full vaccination progress for the elderly population are limited. In mid-April, at the height of Shanghai's latest COVID-19 wave, 62% of the local population aged above 60 years had reportedly completed a full vaccination regimen. The share was just 15% for those above 80.

Concerns remain about the unclear efficacy of homegrown vaccines deployed domestically. In contrast to developed economies that widely use mRNA vaccines, mainland China has relied heavily on two-dose inactivated vaccines manufactured by Sinopharm and Sinovac. In addition, mainland China has approved the use of "mix and match" booster shots since mid-February 2022 to enhance the immune response.

A study jointly conducted by the University of Hong Kong and the Chinese University of Hong Kong found that a third dose of mRNA vaccine given to those who completed their primary inoculation with two doses of either inactivated or mRNA vaccines can "provide protective levels of protective antibody against the Omicron variant," while three doses of inactivated vaccines cannot provide "adequate levels of protective antibody."1 Researchers remarked that countries primarily using inactivated vaccines should consider mRNA vaccine boosters to "achieve optimal protection against the Omicron variant." 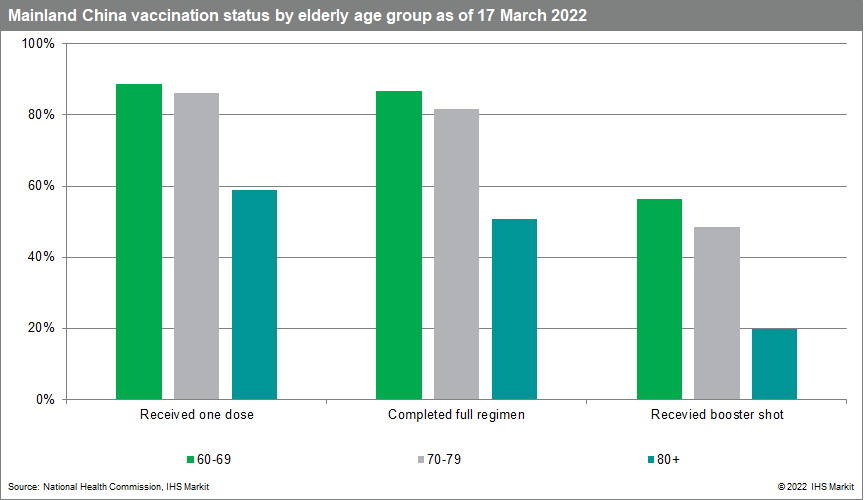 With the 20th CPC Congress scheduled for the end of this year - during which Xi is expected to secure an unprecedented third term as leader of the CPC - it is likely that ensuring continuity in policy, and wide buy-in from local governments on current governance principles, will be the top priority at all costs.

The study simulated a scenario in which the Omicron outbreak in Shanghai in March 2022 was allowed to evolve for six months without non-pharmaceutical intervention (NPI) measures developed since the 2020 Wuhan outbreak (that is, removing the dynamic zero-COVID policy).2 In this scenario, the outbreak would result in 112.2 million symptomatic cases, 5.1 million hospital admissions, 2.7 million ICU admissions, and 1.6 million deaths. At peak outbreak, demand for ICU beds would reach 15.6 times national capacity. A COVID-19 outbreak that leaves 1.6 million dead and overruns the healthcare system would pose serious risks to social instability and is thus politically intolerable.

Theoretically, introducing more effective foreign-made mRNA vaccines would help to better protect the population against COVID-19 variants. Chinese authorities have clear political reasons to prefer domestic vaccines over foreign options. Relying on a foreign vaccine supplier to establish domestic immunity could potentially compromise national security. A domestic switch to a foreign mRNA vaccine would also create negative political optics, as more than 2 billion doses of homegrown vaccines had been exported and donated overseas by the end of 2021.

Regardless, the rollout of a more effective vaccine - either domestically or foreign made - would not fully prevent any fallout from an exit wave of infections. This suggests that it would have a rather limited impact on the general principle of dynamic zero-COVID at the national level, as Xi's policy for COVID-19 containment includes an extremely low level of infections.

Incentives for stringent pandemic control would be even stronger at the local level, as any failure of COVID-19 containment would threaten regional politicians' careers far more than would an economic slowdown.

Any meaningful easing of the dynamic zero-COVID approach would most likely be pushed back until 2023.

When the latest wave is farther in the rare view mirror, attempts at more sustainable pandemic responses in favor of commercial interests remain likely. This could be especially true in areas where significant local lockdown fatigue undermines social stability and business sentiment. Though actual implementation would largely hinge on local pandemic situation, mid-tier coastal cities like Ningbo City of Zhejiang Province, Xiamen City of Fujian Province, as well as inland cities with stronger economic ties overseas like Chengdu City of Sichuan Province, could be among the top candidates to pilot easing, while keeping the risks at a manageable level.

The study of uncontrolled Omicron transmission by the researchers at Fudan University and Indiana University also sheds light on potential public health policies that could help to ease the dynamic zero-COVID policy.

The study simulated the impact of Omicron-mitigating measures - specifically, targeted vaccination of the population aged 60 and older, and wider utilization of the Chinese government-approved COVID-19 antiviral medications.

Wider use of antivirals resulted in a reduction in hospitalizations ranging from 36.5% to 81.2% depending on the medication regimen. A similar impact was seen on ICU admissions and deaths.

Ideally, progress on the pharmaceutical front - such as more widely accessible antiviral therapies or more effective vaccines - would help to reduce the dependence on social and physical distancing measures.