What is the purpose of the "super core" inflation rate?
The European Central Bank (ECB) first outlined the rationale in its Monthly Bulletin back in September 2014, updating its analysis in a more recent study. The starting point is to determine which items in the eurozone HICP have a relationship with changes in the output gap. How inflation rates are evolving for those items can help the central bank to gauge whether the improvement in economic conditions generated by a more accommodative and effective monetary policy is passing through into price developments.

The ECB does not publish its version of the "super core" index, nor the list of items included in it. But by following the same principles, we can create our own measure and consider the potential implications for monetary policy. Like the ECB's version, ours has a high positive correlation with the output gap, which peaks when the latter is lagged by four quarters. 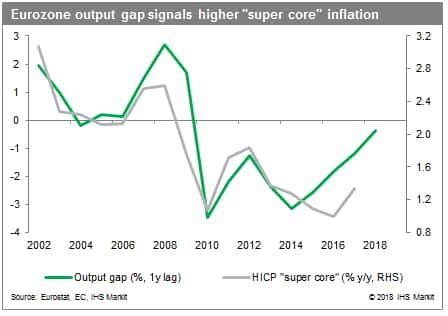 Why is it typically higher than more familiar core measures?
The relatively high weight of services prices, as inflation rates for services have typically run higher than for core goods since the euro's inception (see second and third charts). The differential was particularly elevated in the pre-global financial crisis period, due to the disinflationary effects on global goods prices of new, lower-cost producers like China. 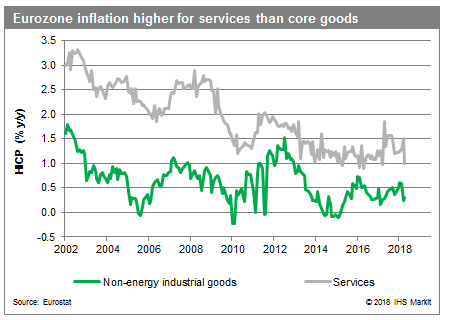 In our "super core" index, the split between services and core goods is around 75% to 25%, respectively, as the former tend to be more sensitive to domestic economic trends (and hence the output gap).

What are the pros and cons of the "super core" rate?
A key plus is reduced volatility (see third chart). Traditional measures of core inflation still include items which can be very volatile at certain times of year, giving misleading signals: e.g. package holiday prices (which are not included in our "super core" index). The "super core" rate can therefore help in identifying genuine points of inflection. 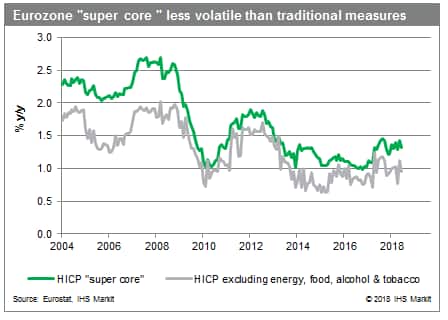 However, it suffers from the same drawback as all "permanent exclusion" measures of core inflation: i.e. relevant data might be excluded, while relationships can change over time, in this case the sensitivity of some HICP items to the output gap. The ECB monitors a dashboard of inflation indicators as a result.

Moreover, focusing on the "super core" rate will not in itself overcome the structural changes which have made forecasting inflation so challenging including flatter Phillips curves due to increased globalization, labor market reforms and subdued inflation expectations. Indeed, the acceleration in the current expansion has been less pronounced and arrived later than one would typically have expected based on past relationships with the output gap.

What can we expect going forward?
Having bottomed out at just below 1% in autumn 2016, the "super core" rate has been on a rather gradual upward trend since. We expect more of the same broadly speaking, consistent with a further pick-up in unit labor cost growth driving services inflation higher.

While less volatile than traditional core measures, there are still some distortions to be wary of in the near-term, including seasonality and base effects. In May, our measure rose above 1.4%, its highest rate for eight months only to fall back sharply in June. The sharp drop in June's services inflation rate from 1.6% to 1.3% looks like an anomaly and we expect at least a partial reversal in July. However, as inflation rates for tourism-related services shot up in southern Europe during the summer of 2017, base effects might continue to lean down in the coming months.

The ECB is focused on the medium-term outlook, announcing in June that it anticipates an end to its net asset purchases in December. This reflects increased confidence that inflation is going to return towards its below but close to 2% objective, illustrated in its account of June's policy meeting.