Who is buying the Tesla Model S?

Given all the attention recently focused on Tesla, I thought it would be interesting to see who is buying the Model S. Specifically, what are customers trading in for the Model S, or what other vehicles do Model S buyers have in their garage if they are adding to their fleet? The Model S conquest data, derived from Polk new vehicle registration data, are fascinating.

There are two ways of looking at the data. First, the pure conquest data show that the Model S is conquesting owners of Toyota (brand) vehicles more frequently than owners of any other brand on the road, followed by Mercedes-Benz and BMW owners (see table below). The Toyota conquests by the Model S are being driven by the Prius, which is the number one model conquested by the Model S. The Highlander and Sienna are fifth and sixth on the list. Interestingly, the Leaf ranks number seven on the model list, and the fact that the Prius and Leaf both rank so high on the Model S conquest list suggests that the S now gives hybrid/EV-inclined purchasers an opportunity to move up to a vehicle that is:

The second approach to the conquest data looks more deeply at the data and by so doing provides a more useful picture of the actual marketplace dynamics. This second approach compares a model's conquest share of all conquests with the same model's return to market share of all customers who returned to the market. In other words, is the model in question being conquested by the Model S at a faster or slower rate than the overall rate at which owners of that model return to the market? This calculation results in an entirely different list of top ten makes. The ten brands which are most likely to be conquested by the Model S, when compared to the rate at which their customers return to the market in general, are all either exotic or premium makes. Also, the conquest/return to market ratios for these makes are exceptionally high, suggesting they are much more likely to move to the Model S than the typical customer coming back into the marketplace. These data point unequivocally to the conclusion that Model S buyers are very well-off financially.

In summary, while the simple conquest data suggest the high-volume mainstream and premium makes are losing the most customers to the Model S, a comparison of conquest data with return to market data reveals that, in fact, the exotics are moving to the Tesla model at rates far above those of other brands. 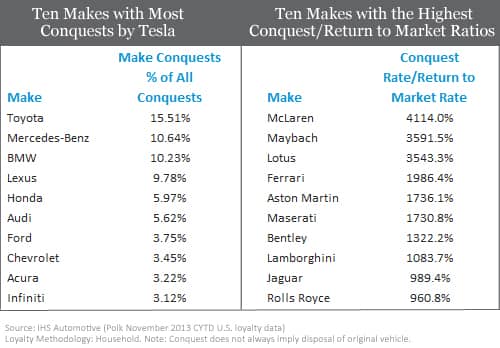