Which ASEAN countries will be the front-runners to decarbonize their power sectors?

Given its location and proximity to oceans, ASEAN is one of the most vulnerable regions to the impact of global warming. In recognizing the risks, the region has set decarbonization targets, pledged reduction plans in their nationally determined contributions (NDCs), and passed laws and policies to address climate change.

This report will briefly describe the region's national emission targets and then take an in-depth view of the power sector, ranging from PDPs and future generation fuel mix to emission perspectives; in particular, which country or countries' power sector will be the front-runners leading the decarbonization pathway in the next 10-15 years.

Of the 10 ASEAN countries, 8 have announced national targets to achieve net-zero GHG emissions or to become carbon neutral by 2050, corresponding to the 1.5°C target set by the Intergovernmental Panel on Climate Change (IPCC), except Indonesia, which committed to net zero by 2060, and the Philippines, which is the only ASEAN country that has not committed to a net-zero target.

However, despite these pledges, most ASEAN countries have not yet developed firm measures to help them achieve the targets. Also, an important part of net-zero actions is to reduce coal use in power generation, but current PDPs mostly do not reflect the coal phaseout plans, neither do they align with their net-zero targets. 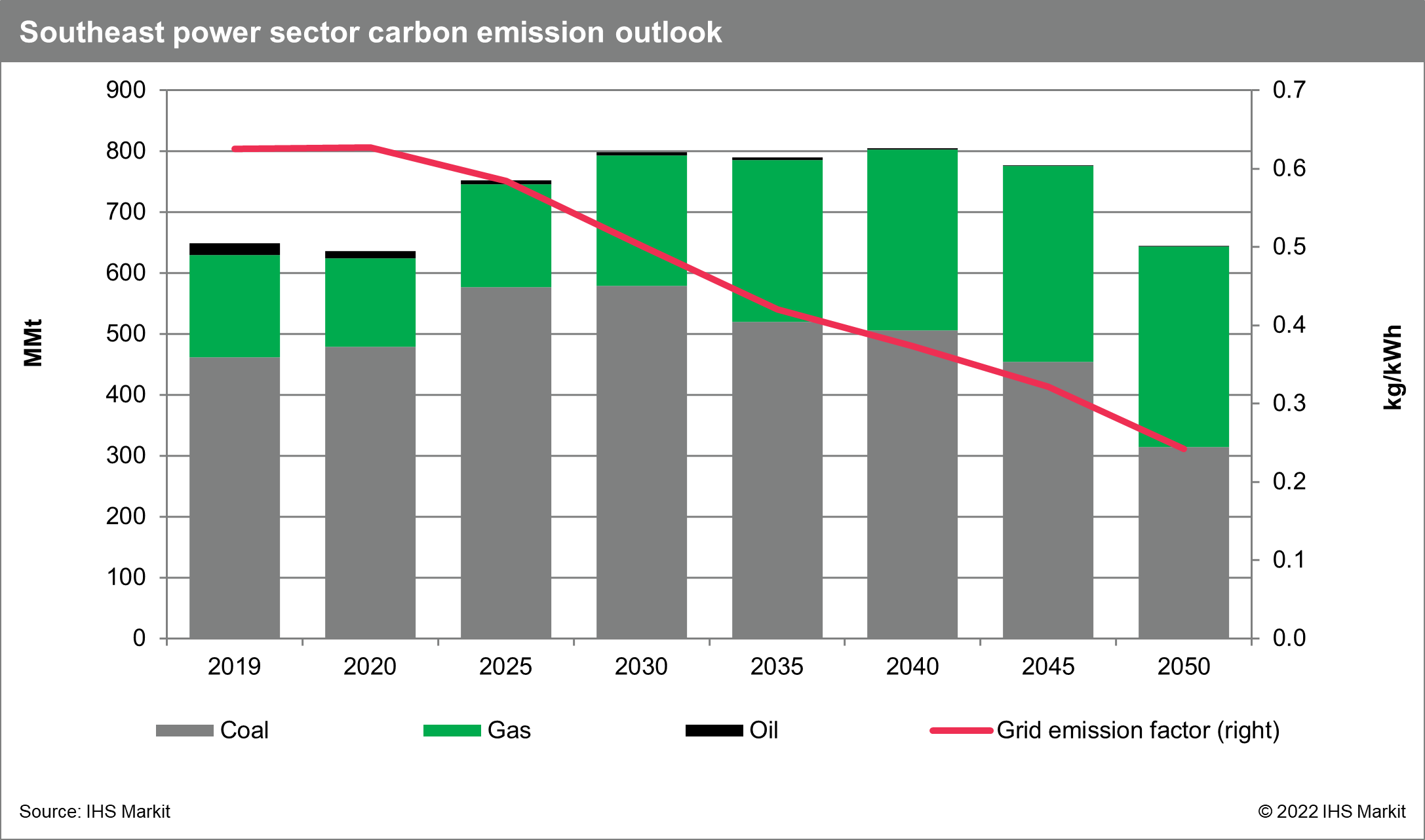 According to the current PDPs and the region's ability to deploy clean energy, there will still be substantial coal power capacity, mostly already under construction, to be added in the major power systems. Therefore, ASEAN is expected to witness coal-fired generation growth in next seven years. Post-2030, the reliance on coal will ease over time, with more renewable projects coming online. Accordingly, the power sector's emission would reduce but not reach net zero by 2050. Figure 1 illustrates the region's power sector's carbon dioxide equivalent (CO2e) emission through 2050.

ASEAN power sector CO2e emissions will continue to grow and peak at 805 million metric tons (MMt) in 2029. Emissions will then plateau between 2029 and 2040, as the region retires 20 GW of coal capacity (40% from Malaysia) in this period while adding 54 GW of new gas capacity to provide stable power output and to balance the renewables.

The region's total emission will move downward only from 2041, owing to accelerated renewable growth combined with a phase-down of coal in total power generation. The reduction will accelerate from 2045 owing to the implementation of multiple decarbonization measures in the region, including large-scale coal capacity retirement and the expectation of carbon capture and storage (CCS) technologies being installed largely on new thermal power plants. Grid emission factors will improve significantly from 0.54 kg/kWh in 2019 to 0.18 kg/kWh by 2050. Besides, progress in attaining the emission peak remains uneven among individual countries.

In the next 5-15 years, Singapore is positioned to be the leader in the decarbonization of power sector. It is the only country that is projected to achieve a CO2e emission reduction (9%) in 2030 compared with the 2019 level (see Figure 2). It is followed by Malaysia and Thailand, each representing an emission growth of 11% and 12%. Indonesia, Vietnam, and the Philippines will lag owing to heavy dependence on coal-fired generation and reliance on external funding to support projects 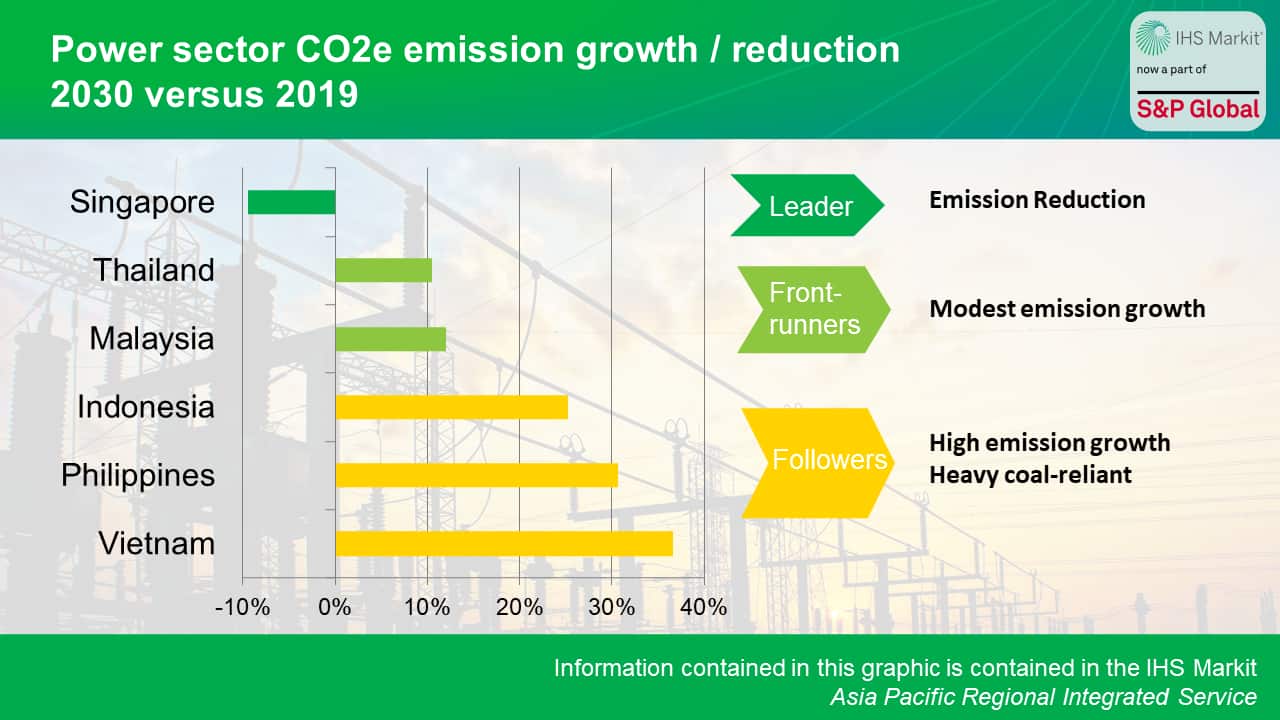 Singapore power sector's CO2e emissions are expected to peak in mid 2020s, as the country not only set a net-zero target but also made tangible actions by deploying domestic renewable projects, planning for low-carbon/renewable imports, and applying carbon tax to incentivize low-carbon energy.

In alignment with the country's net-zero targets, the government launched various programs to aggregately deploy solar power. In addition, the country is actively exploring renewable import projects, with two rounds of requests for proposals (RFPs) launched to call for up to 4 GW of dispatchable low-carbon power imports, mostly to come online before 2035.

A positive decarbonization perspective will also be aided by efficiency improvements of gas-fired generators (some of which have already signed contracts with the equipment suppliers for upgrades) and the carbon tax that started with S$5 per metric ton of carbon dioxide equivalent between 2019 and 2023, with a plan to increase to S$50-80 by 2030.

Thailand is also in the front-runner club, after Singapore. Thailand power sector's emission will have a brief increase from oil during 2022-23 as some gas plants have temporarily switched to burning oil owing to gas price hikes. From 2024 onward, emissions will continue to grow but at modest rates as the country manages to cap the generation from coal-fired power plants.

Thailand stopped building new coal plants and will continue to promote renewable energy. Thailand has launched the Bio-Circular Green (BCG) economic model as the national agenda to promote renewable energy, and the National Energy Policy Committee (NEPC) approved the New RE Quota for purchasing 5.2 GW electricity from renewables under a feed-in-tariff (FIT) scheme between 2022 and 2030. Coupled with the renewable expansion, Thailand has made significant progress toward smart grids and prepared the enactment of third-party access codes to the power grid systems. Thailand also intended to increase imports from Laos's hydropower and is accelerating legal and policy actions to implement enhanced carbon pricing.

Similar to Thailand, Malaysia is ranked high from a low-carbon perspective. The country has stopped building new coal-fired power plants and announced plans to retire the existing coal fleet in stages or once PPAs with each facility expire. In addition, Malaysia is endowed with abundant gas resources, and it could quickly ramp up gas capacity to make up for the capacity loss from coal.

Malaysia has represented strong renewable energy demand. To promote renewables, the country has awarded 2.2GW capacity in four rounds of large-scale solar (LSS) tenders and released the Malaysia Renewable Energy Roadmap (MyRER) to provide detailed plans for expanding the use of renewable energy sources and support further decarbonization of the electricity sector through 2035. As a result, emissions will slowly increase for a few years and reduce significantly owing to gas replacing coal alongside the renewable boom, presumably from 2030.

Vietnam, Indonesia, and the Philippines are facing the same dilemma. They represent the strongest economic growth in ASEAN and require substantial new power capacity, including reliable thermal power plants, to sustain the growing demand. Meanwhile, they are the most coal-reliant countries and decarbonizing the existing power fleet appears to be a difficult task.

Vietnam has announced a net-zero target and made commitments to quit coal at COP26, but no strategic report has been issued to clarify the route to the net-zero target. The quit-coal statement was not joined by specific proposals. In fact, despite PDP8 drafts showing that Vietnam's power system would center on gas and wind, the capacity of coal and wind moves up and down in different drafts (see Figure 3), and the final release has been delayed repeatedly.

Furthermore, the expansion of renewable capacity in the past three years came with great challenges to Vietnam's grid system. Therefore, in January 2022 Vietnam's National Load Dispatch Center (NLDC) announced not to add wind and solar power to the 2022 national plan. In view of the investment deficiency in the grid not being able to accommodate the renewable expansion, Vietnam is to consider opening the grid sector to private and foreign investors.

Neverthless, Vietnam has one wild card to play, that is its two big gas blocks: Block B and Cá Voi Xanh. Should prices of LNG imports continue to trend higher, Vietnam may try to push forward its domestic gas development more and accelerate the coal retirement accordingly. 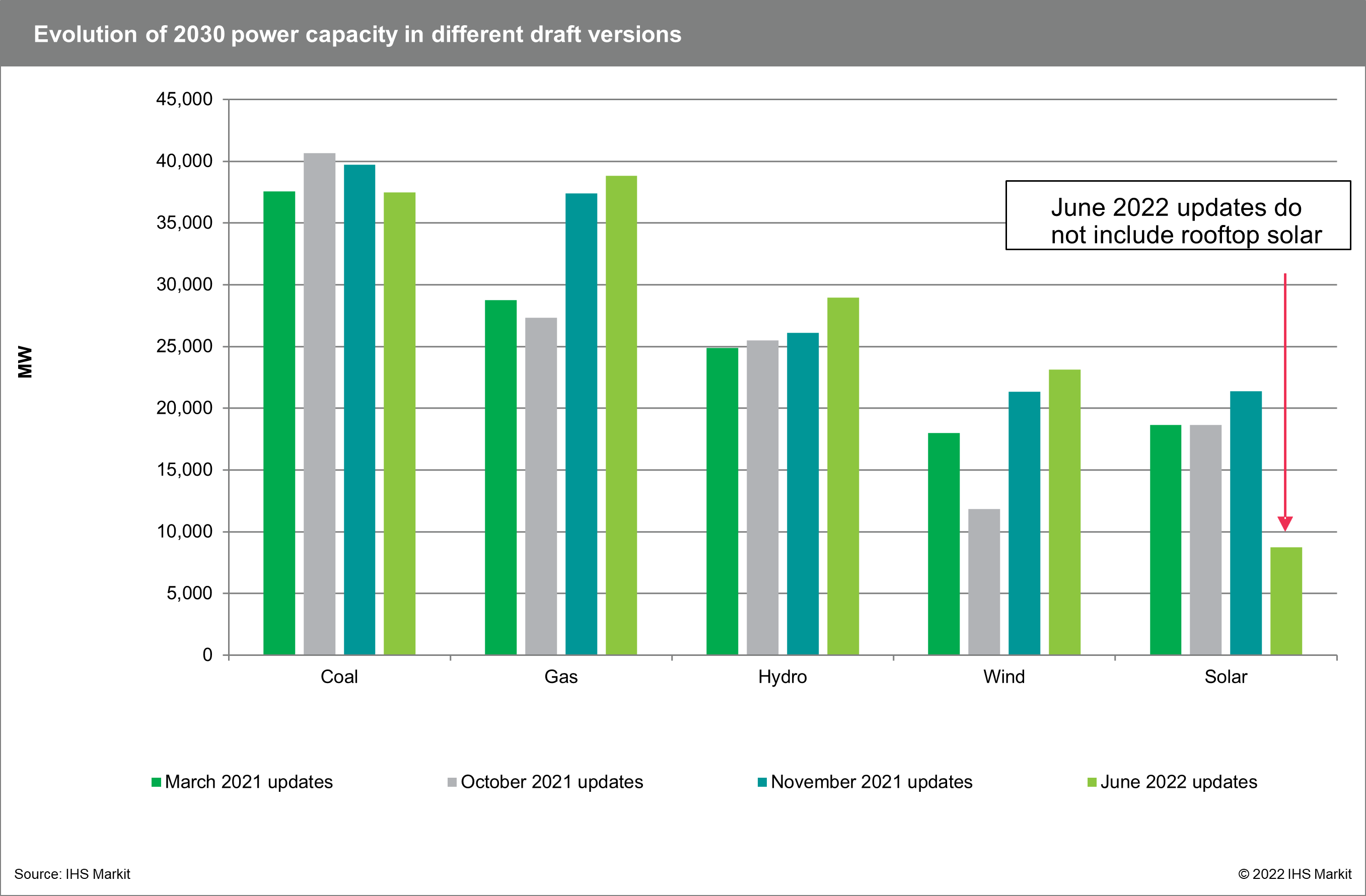 Indonesia is heavily coal-reliant and has been slow to develop renewables. Therefore, CO2e emissions will grow quickly through 2041 owing to increasing power generation from coal-fired power plants. In the next five years, more coal capacity will still be added, and coal generation share will remain high.

Various plans around coal have been announced, but key ones (PLN coal retirement plan will be after the completion of 16GW planned mega coal projects; the country's low-carbon vision, LTS-LCCR 2050, still specifies that coal will continue to have an important role in the power sector; and recent New and Renewable Energy Bill classified liquified and gasified coal as "new energy" and is part of Indonesia's efforts to replace petroleum imports) delivered the same message that Indonesia is not ready to remove coal from the power sector in the medium term and even in the long term.

Meanwhile, instead of phasing out coal, Indonesia has been actively involved in biomass co-firing to phase down coal use. It also established a carbon tax, but the initial price of 30 Indonesian rupiah per kilogram of CO2e, or US$2.09, is viewed as being too low to incentivize decarbonization actions. All these actions could slow the emission growth rate before 2041 but would not move the peaking earlier.

The Philippines is the only ASEAN country that has not committed to a net zero target. It is well positioned for more renewable development in terms of policies, procurement, and economics. However, the only domestic gas source (Malampaya) is depleting, and the introduction of LNG has been slow. It appears difficult for the country to completely phase out coal soon.

In December 2020, the Philippines's energy secretary announced a moratorium of new coal plants. In 2021, power companies announced discontinuing some coal projects. However, at least half of the planned coal capacity stays on the table. Therefore, the Philippines's emissions will likely grow following the coal-fired generation growth through 2028. It remains to be seen if the newly elected President Ferdinand Marcos Jr would commit to favor renewables and roll out decarbonization measures.