Where was the General? More on Polk's 16th Annual Automotive Loyalty Awards...

On January 10, 2012, Polk announced the winners of the 16th Annual Polk Automotive Loyalty Awards and one question has been asked over and over again, where was General Motors? GM did not win an award this year, but finished second in the Overall Loyalty to Manufacturer category. Similarly, the Chevrolet Silverado finished second in the Mid/Full-Size Pickup Truck category.

To some it might appear as though GM has poor owner loyalty, but nothing could be further from the truth since General Motors does an admirable job of retaining their owner base and evidence of this can be seen in the results of Overall Loyalty to Manufacturer. The race was very close and GM was in the lead for four of the 12 months between October 2010 and September 2011 - the time period for which the awards are calculated. Ford ultimately won the award and finished 1.2 percentage points ahead of GM with Honda coming in third.

The chart below depicts the cumulative results by month. 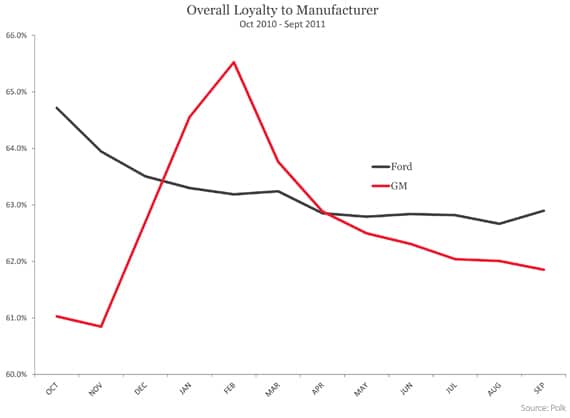