When do price changes occur for branded pharmaceuticals in the top 5 EU markets?

It is a well-known fact that when governments in developed countries attempt to generate savings, it is politically more expedient to focus on lowering pharmaceutical expenditure. In the past, cost-containment policies mainly targeted products that lost their patent as well as their generic counterparts. However, increasingly price cuts also occur for innovative drugs that are still patent-protected. In order to have a better understanding of when price changes occur for funded pharmaceutical that are still patent-protected, IHS Life Sciences analysed price changes for innovative drugs approved by the European Medicines Agency (EMA) that were priced in 2009 and afterwards. Results are presented in the chart and table below. 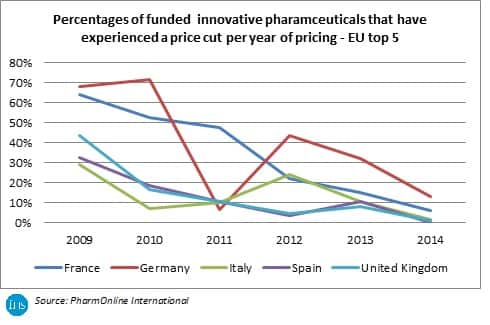 Germany and France: innovative pharmaceuticals are hit hard by cost containment policies
The graph above demonstrates that Germany and France are the countries where innovative products are more likely to experience a price cut. While in Germany, price cuts experienced between 2009 and 2011 were relatively limited, they have started to significantly increase when, three years after the AMNOG reform came into force, distribution margins have applied on negotiated price. Those large price cuts also demonstrate that pharmaceutical companies tend to set prices at relatively high levels during the first year of marketing, while pharmaceutical pricing is free. Also, prices tend to decrease relatively quickly, 1.2 years only after they are priced.

France is also a country where a large number of innovative pharmaceuticals experience a price cut. The French Higher Authority on Healthcare's (HAS, Haute Autorité de Santé) has increasingly been stringent with innovation and many drugs are not considered as bringing added value over their comparator(s). Our data shows that on average prices decrease around 1.7 year after pricing. This is not surprising as most drugs are granted an ASMR rating of IV or V. However, there are instances where drugs deemed innovative also experience a price cut before the 5 years have passed. For instance, while Vidaza (azacitidine, Celgene) was granted an ASMR rating of II, its price decreased by 10%, 3.2 years after it was priced.

Prices of innovative pharmaceuticals are more likely to remain constant in Italy, Spain and the United Kingdom
In Italy, Spain and the United-Kingdom, prices of innovative pharmaceuticals tend to remain constant over time. In Italy, the large price cuts experienced are mostly due to the fact that pharmaceuticals are commonly priced in the country before they are included into the reimbursement list. However, once the drug is eventually reimbursed, large price cuts occur.
In the United-Kingdom, when taking a look at NHS prices, they mostly remain constant. However, owing to the fact that the 12.5% discount on the NHS price might not be provided by manufacturers for certain pharmaceuticals, prices can eventually fluctuate over time.

This analysis shows that price cuts impact innovative drugs in the major European pharmaceutical markets. Price cuts occur relatively quickly, less than three years after a drug is priced on average. However, depending on the country, those price changes will impact more or less innovative pharmaceuticals. It remains to be seen if pressure on innovative drug prices will continue to increase.