What’s the deal with Sausages?

The BREXIT impact on the UK fresh meat industry so far

Using our trade data to establish how BREXIT has impacted the UK Fresh Meat industry so far.

As we hit the 10-month mark since BREXIT, uncertainty over trade continues. The Northern Ireland Protocol creates a trade border between Great Britain (GB) and Northern Ireland (NI), allowing NI to remain in the EU single market for goods. This means goods are permitted to flow freely between NI and Republic of Ireland but presents issues for GB to NI trade. One such industry affected by these restrictions is the Fresh meat industry.

External exports of fresh meat to the EU face a number of restrictions. This ban has meant GB suppliers haven't been able to export certain fresh meat products to the EU since January. Post Brexit, the UK was given a 6-month grace period, allowing fresh meat exports to NI from GB to be sold in NI supermarkets, with none passing the border to the Republic of Ireland. The grace period was set to end and the bans on fresh and chilled meat exports to NI were set to come into force in July. A last-minute extension of this grace period to the end of September offered a small level of comfort to those industries and business most affected. However, for most, it has simply acted as a temporary plaster on a far bigger issue, simply moving the deadline later as opposed to addressing or reducing the impact. As the end of September drew close, we used our trade data to investigate how the industry had responded to these restrictions so far.

How significant is this ban for the UK Fresh and Chilled Meat industry?

Using our IHS Markit Global Trade Analytics Suite (GTAS) the UK was identified as the 11th largest exporter of fresh or chilled meat by volume during 2018 to 2020 (Figure 1), with exports representing $1.3 billion in value in 2019. Of the top 10 global importers in 2019 & 2020, 6 out of 10 are in the EU, representing a significant chunk of the market (Figure 2). UK Exports were also dominated by the EU with 8 out of their top 10 trade partners being EU members. This is partly because some of the world's largest meat importing countries, such as Mainland China, Japan & South Korea, mostly import meat that is frozen rather than fresh. 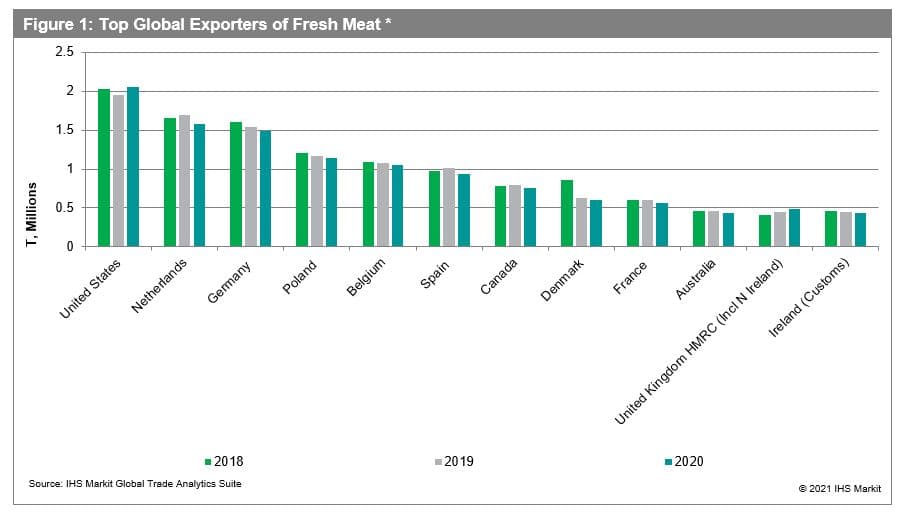 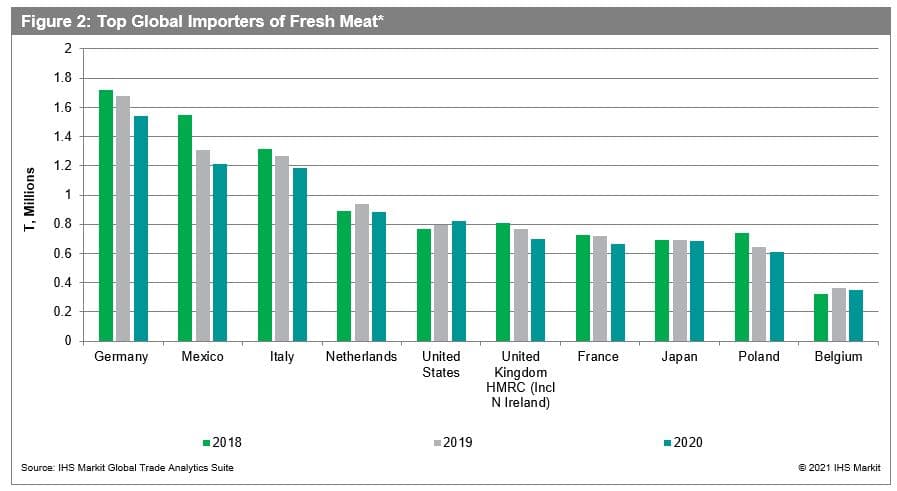 The EU ban only applies to specific meat products including minced meat of poultry and other animals, as well as chilled meat preparations such as sausages.[i] This means, in theory, many meat products should be unaffected by the changes, although in practice this may not be the case.

The EU bans on fresh meat only pertains to certain chilled meat preparations such as sausages. The UK exports relatively low volumes of sausages (HS1601) each year, being only around the 30th largest exporter globally, with countries such as the US and Germany exporting far larger volumes (Figure 3). It was sausages however, that piqued the interest on news headlines in June as the EU ban drew close[ii]. 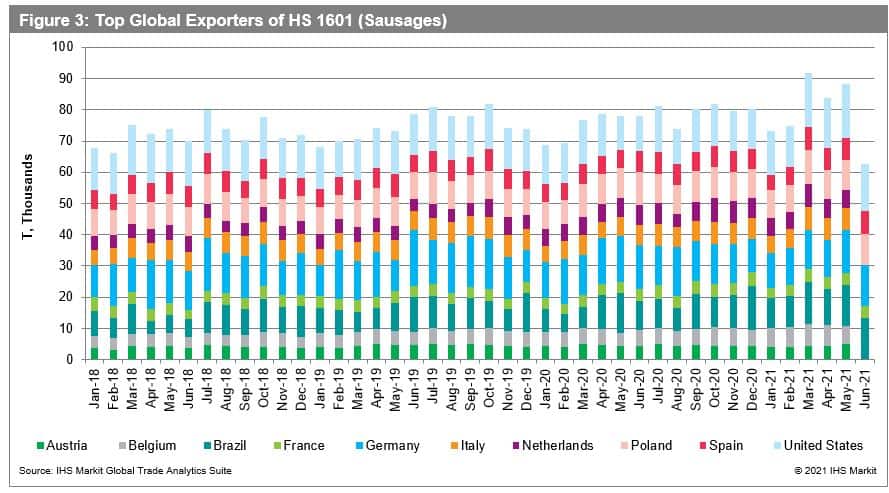 It seems the concern from the press may have been well founded as UK Exports of sausages rapidly decreased with a drop off in total imports from the UK in 2020 through to 2021, despite the grace period (Figure 4). The first 7 months of 2021 showed a drop off of around 56% from the same period in 2019. 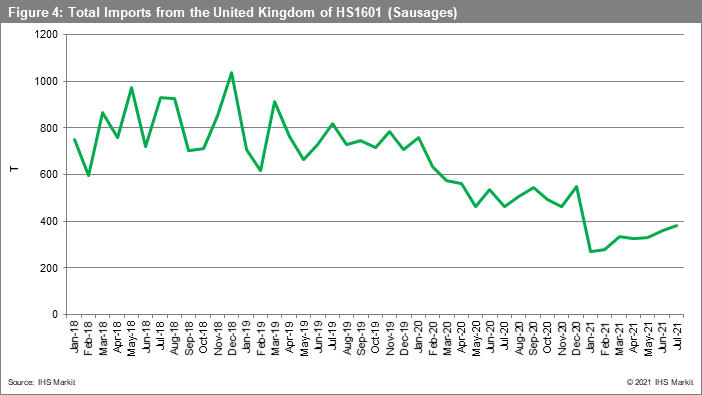 The top global importers of Sausages are EU dominated, but do feature some other influences such as Mexico & Canada (Figure 5). The UK may be able to capitalise on these markets given potential upcoming trade deals, although the difficulty here would be the increased logistical challenges and cost implications of shipping fresh produce over such distances. Shipping fresh meat naturally introduces geographical limitations, which has historically limited the UK to exports to EU as a preference. 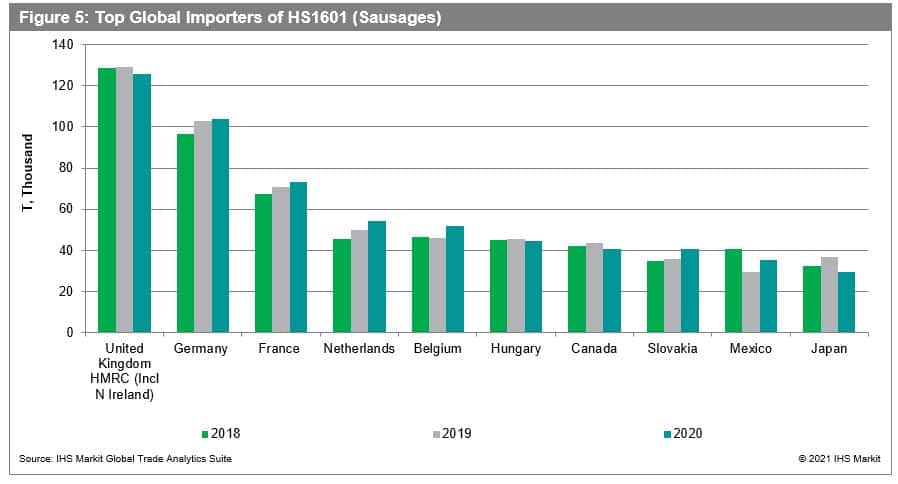 UK Sausage exports currently primarily go to the Republic of Ireland. These have dropped off substantially during 2021 as GB, NI and Republic of Ireland continue to reorganise their supply chains in advance of the upcoming ban. This drop off is therefore not surprising, although does highlight that the UK is yet to find an alternative consumer of its sausages.

Following BREXIT, we also observe a growth in UK exports to non-EU countries (Figure 6). Although we see a growth in the percentage of sausage exports going to non-EU countries, such alternatives do not seem to offer the same size in market as that of the EU as the overall volume of exports is still significantly lower than previous years. 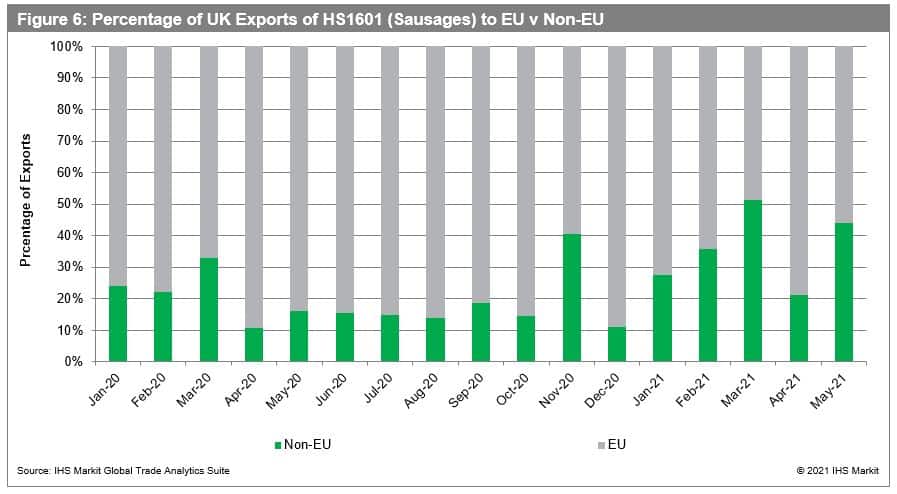 How do the bans impact Fresh meat?

Despite the fact the ban on fresh meat exports to the EU only applies to specific products, there is an observed knock-on effect to other fresh meat produce. Perhaps the lack of clear guidance on impacted HS codes led to an over-cautious response and hence, reductions in trade. As exporters become more comfortable with the regulations, a recovery may be observed. During 2019 & 2020 the top trade partners for UK fresh meat exports were Ireland, Germany, Netherland, France & Belgium. Lower down the list were some non-EU options such as Mainland China, Hong Kong SAR, Philippines, USA, Jordan, and Australia; however, these options combined only equate to approximately a third of the market size of Germany or the Netherlands.

In Q1 of 2021 we saw the imports of fresh meat from the UK rapidly decrease for most of the top trade partners of the UK (Figure 7). We only saw an increase in France with other trade partners dropping off substantially including 88% decrease for Denmark, 75% for Germany and 98% for Poland. Fortunately for the UK it appears as if some of this may have been the initial shock factor of Brexit, with some recovery observed in UK exports in April and May (Figure 8). 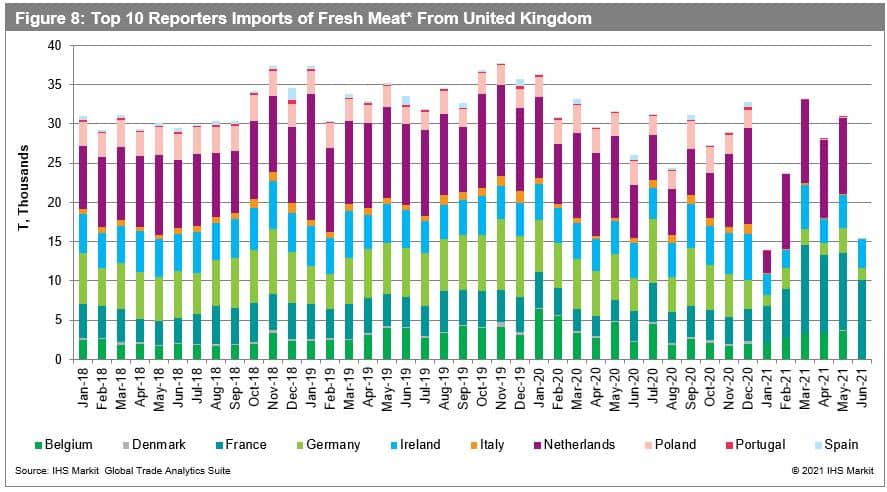 UK Trade with Republic of Ireland

Additionally, total Republic of Ireland imports of fresh meat from the UK are down by 24% in Q1 2021 v 2020. We also see a significant shift in the % market share of GB v NI. From December 2020 onwards we see Ireland imports from NI grow as those from GB drop off (Figure 9). This marks a significant shift in behaviour, with the NI Protocol seeming to provide obvious benefits to NI farmers, while the impact on GB farmers is far less positive. This seems to apply to a broad range of fresh meat produce despite these not necessarily being affected by the ban. 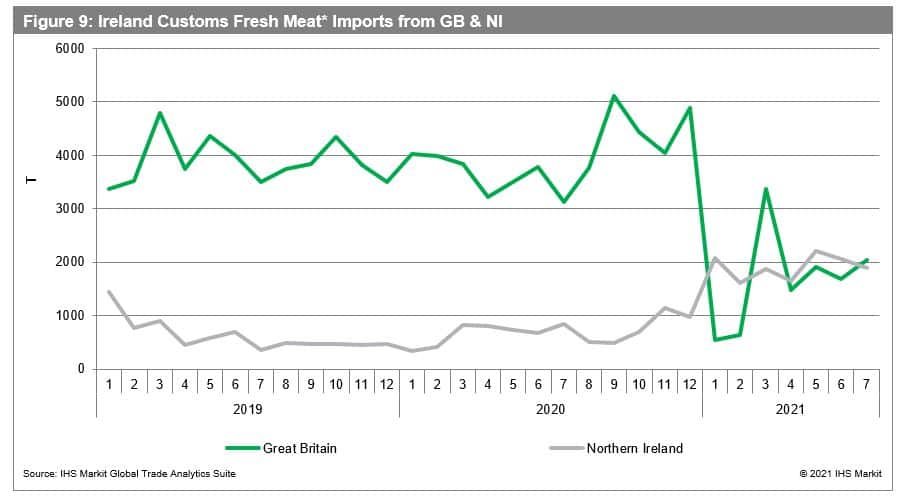 While it seems that the grace period has been positive for NI and Republic of Ireland, allowing them the needed time to re-organise supply chains, such positive impact has not been observed in GB. GB produce has yet to find a suitable alternative market and so exports are down, with limited options seemingly available.

It is worth noting that prior to BREXIT, the UK focused its fresh meat exports within the EU, not only due to demand but due to practicalities. The obvious limitations of shipping fresh produce limited the export partners available to the UK farmers. As the UK looks forward, this also means future trade will be shaped by these limitations. A shift towards longer distance partners may also see alternative preparation or preservation methods such as freezing be favoured as farmers try to capture markets further afield.

*HS Codes included as 'Fresh Meat' at a 6-digit level as below: 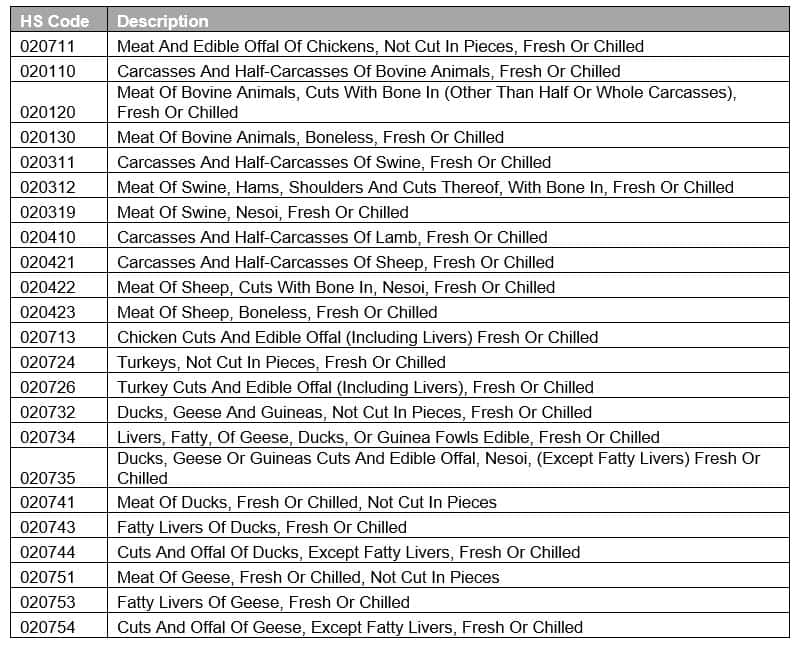