What you need to know: Second quarter 2018 production forecast 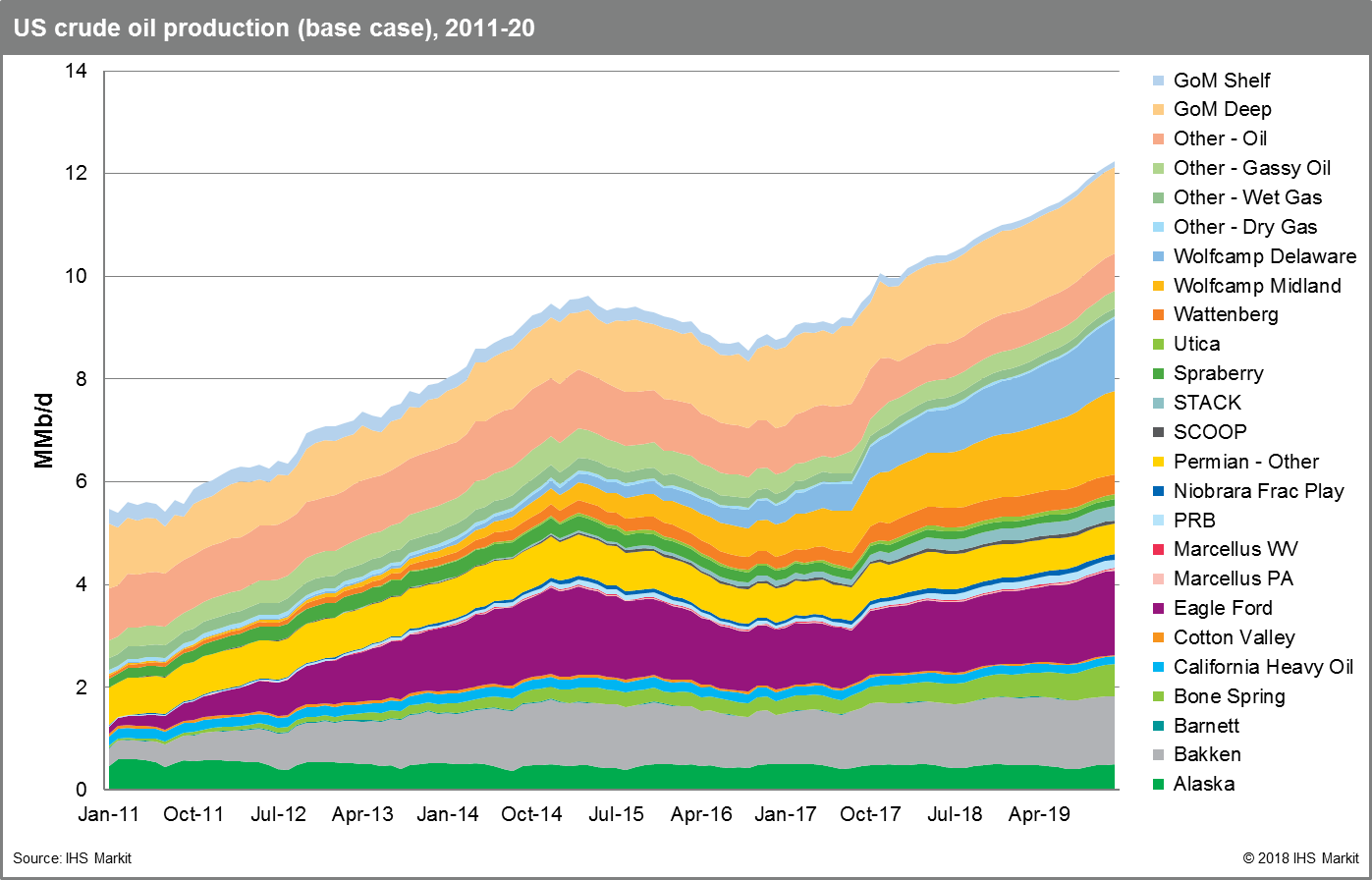 US oil production projected to surpass 11.0 MMb/d by December 2018

Following a price recovery that began during third quarter 2017, WTI spot prices have remained above $60/bbl throughout early 2018. Higher prices and hedges will enable US producers to increase production by more than 1.0 MMb/d during 2018 while maintaining limited capital overspending; this is a significant departure from previous years, in which production growth was fueled by substantial cash flow deficits. Nonetheless, US onshore capital expenditure is projected to continue to climb, with spending increasing from $71.4 billion in 2017 to $97.4 billion in 2018.

Infrastructure constraints are likely to temporarily dampen Permian production growth, creating a call on other basins to increase supply until new pipeline capacity can be brought online. The Eagle Ford in particular is likely to experience strong production growth during 2018 and 2019, though output from the play will begin to decline after 2019, following a buildout of additional Permian takeaway capacity. Permian Basin gas takeaway constraints will limit production growth as associated gas output outstrips existing gas pipeline capacity by late 2018, before new capacity additions are brought online through late 2020. Flaring may provide a relatively low-cost solution to these constraints, adding perhaps several dollars to strong Permian break-even prices. However, regulators are unlikely to allow long-term flaring of significant gas volumes. Permian Basin crude production is also likely to exceed existing oil pipeline capacity beginning in late 2018, before new capacity enters service in 2019. That will lead to short-term bottlenecks and could widen WTI-Midland discounts and increase crude by rail shipments from the Permian.

Strong oil production growth in 2018 is all but certain

Rising oil output is fueled by supportive Permian, Eagle Ford, and STACK economics in a mid-$50/bbl price environment, in addition to active hedging programs that have allowed US companies to hedge more than one-third of projected 2018 oil volumes at an average strike price of $56.17/bbl. The ever-prolific Permian Basin, for its part, will remain insulated from possible price declines through mid-2019 because Permian-focused companies have hedged approximately 68% of 2018 oil volumes.

Operators continue to optimize logistics and well configuration. The Eagle Ford and Permian plays continue to be developed with ever-longer laterals and higher proppant loads, leading to greater volumes from fewer wells. Proppant intensity has stagnated since late 2017 across most plays, but there continue to be indications that average proppant intensity could grow while still providing positive marginal returns in well productivity. IHS Markit has modeled type curve improvements both from lateral lengths and completion operations, though we expect continued productivity to taper off through 2020 as operators reach the limits of well designs. Beyond 2020, the exhaustion of core area drilling inventory could reduce well productivity in both mature and smaller plays, including the Wattenberg and Eagle Ford. Future gains are likely to be longer laterals, and catchup to proppant intensity best practices by laggard operators.